Yes, CO2 is Warming the Climate (And no, Exhaling is Not the Cause)

Carbon Dioxide (CO2) concentration in the atmosphere is the primary driver of man-made climate change (often called global warming). This has been demonstrated by multiple lines of evidence and is undeniable.

"But we exhale CO2 when we breathe, right? So CO2 can't be harmful, right?"

Wrong, and let me explain.*

Those new to climate science may be confused by intentionally deceptive graphs like the following, which was recently making the rounds on Facebook and denier lobbyist blogs. Often, especially on Facebook, the graph is given with no further explanation (insinuation and innuendo are common tactics of climate deniers). People who post it claim "it comes from a reliable source," but then refuse to actually cite and/or link to that source. It's because the source is the denier lobbyist industry. The goal of the graph is to mislead the public. Here's the deceptive graph: 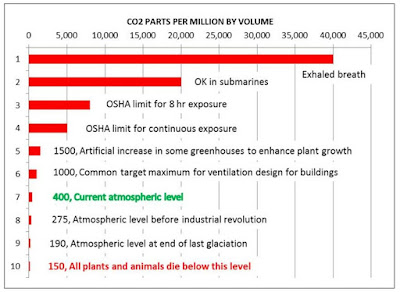 Let's assume the values given are at roughly accurate. The green highlighted level of 400 ppm (parts per million) is approximately the current level in the atmosphere. You wouldn't know it from the graph, but 400 ppm in the atmosphere is exceptionally high; we'll get back to that in a minute. The graph is deceptive for two reasons: 1) it suggests levels in the atmosphere aren't high because levels in other situations are okay, and 2) it assumes the toxicity level of CO2 is somehow relevant to the physical warming capacity of CO2.

Both of these points are absolutely and grossly false. It's akin to saying that because we drink, swim, bath, and are composed largely of water, we can't drown in it.

CO2, like water, has multiple properties. At very high levels it is toxic. A very low levels it is necessary for plant growth. All well known and understood.

But CO2 also acts as a greenhouse gas. CO2 in the atmosphere keeps the Earth at a relatively stable temperature. Without the CO2, Earth's surface temperature would be about 30 degrees Celsius colder and, well, none of us would be here. Adding more CO2 to the atmosphere warms the Earth. This is just basic, well-understood, physics. CO2 keeps us warm; more CO2 = more warming.

So we've added as much CO2 since the beginning of industrialization as was the difference between glaciers and comfortable climate. As Vice President Biden might say, that's a Big F'n Deal.

To use slightly more technical language, the fact that CO2 acts as a greenhouse gas is basic physics known for more than a century. Sunlight passes through the atmosphere and heat gets radiated back to space, but a lot of that heat gets trapped by CO2 and other greenhouse gases and sent back to the surface. This process is continuous and keeps our Earth warm. We've been in a narrow balance for hundreds of thousands of years, but since we started burning fossil fuels we've added a lot more CO2 to the atmosphere (about 45%). More CO2 means more warming. Basic physics (and math). All demonstrated over and over again.

So don't be confused by intentional acts of deception like the first graph given above. The reality is that whether CO2 is toxic at 400 ppm or not is irrelevant to CO2's warming properties in the atmosphere.

A more relevant graph is the one below from NASA (see on this page), which shows that our current CO2 levels (arrow, top right) in the atmosphere are unprecedented in the modern age (i.e., during the time us humans have made a home here):

And a result, we've caused warming of the atmosphere, as the graph below clearly shows (source here). The red dot is February 2016. New heat records were set in 2014, then broken in 2015, and are on track to be broken again in 2016. Year to year fluctuations occur because of short-term events like El Nino and La Nina, but the overall trend is absolutely clear. 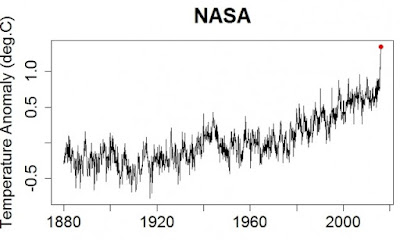 Bottom Line: CO2 is warming the climate, and humans are the dominant cause of that warming.

Now that is a big deal.

*A note about the exhaling of CO2. Yes, we exhale CO2. No, breathing isn't contributing to man-made climate change. The CO2 we exhale is the same CO2 that has been cycling around for thousands of years, moving from plants to soils to air to humans to everything else and back again, just as it has always been. The amount of CO2 has been stable within a relatively narrow range (second graph above) because it cycles in and out of things but is always somewhere. But here's the kicker - CO2 from fossil fuels is not part of that cycle. It has been buried in the ground for millions of years getting turned into coal and oil and natural gas, completely out of the carbon cycle. During the last century we've dug up a lot of that "out-of-the-loop" carbon and emitted it into the atmosphere in humongous amounts where it hasn't been during human civilization. More carbon = more CO2 = more warming.