European Ecolabel Could Reduce The Number of Chemicals We Use

The European Union's Ecolabel scheme should be beefed up to encourage less use of potentially dangerous chemicals in products, says a report by the European Environmental Bureau (EEB) and the European Consumers' Organisation (BEUC). The environmental label, which is recognisable by its flower logo, is intended to help consumers make greener choices in purchasing many day-to-day use products such as light bulbs, detergents or paper. The report calls for the Ecolabel to be more strict on the chemicals used in the products it endorses. The report comes out just as European leaders are debating the revision of the Ecolabel Regulation.
"It is the ideal time for discussion on a systematic and strategic approach to chemicals within the Ecolabel scheme," said Doreen Fedrigo, EEB's policy unit coordinator. Monique Goyens, director general of BEUC, said: "Consumers should be able to trust that products bearing the Ecolabel do not contain substances which are hazardous to health and the environment." The EEB and BEUC said they do not simply want to restrict the use of problematic chemicals in Ecolabelled products. They have proposed that the scheme should question whether a dangerous chemical in a product fulfils an absolutely necessary function, if the design of the product could be adapted to avoid using the chemical, and whether the substance could be substituted for another which is less dangerous. If these are not options, the organisations have called on environmental ministers to use the Ecolabel to encourage restricted use of the dangerous chemicals in the product to ensure it still works as it is designed to, but has fewer risks to health and the environment.
The report can be downloaded at: Ecolabel Report
Posted by The Dake Page at 5:23 AM No comments: Links to this post 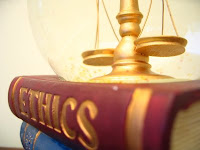 Historically scientists have been looked on by the public as "those guys in white lab coats" or the elitist ones in their ivory towers. Many scientists like to keep their distance from public policy, preferring to do their science and assessments while letting politicians set policy. Others feel that scientists haven't played enough of a role in determining how their science is used. The climate change debate has found scientist and non-scientist using science to prove or disprove global warming.
Well, the activist group Public Employees for Environmental Responsibility (PEER) in the United States is urging EPA Administrator Lisa Jackson to adopt formal policies on her stated commitments to scientific integrity, openness and the rule of law, after expressing concerns over the former New Jersey environment secretary's record in that state. They also are reacting to accusations of a lack of scientific integrity of the previous administration. The group sent Jackson a letter on January 26th asking her to “immediately translate these sentiments into concrete, enforceable agency policies. As President Obama has done in issuing a series of directives on openness and ethics, PEER strongly advocates that you declare specific policies that outlaw gag orders, forbid political rewrites of scientific findings and hold managers accountable for actions found to be illegal.”
In a January 23rd memo to EPA staff, Jackson expressed support for the so-called “fishbowl” policy initiated in 1983 by then-EPA Administrator Bill Ruckelshaus. The transparency policy, reaffirmed by every president but the Bush administration, says that the agency should operate “in a fishbowl.” The Bush EPA drew fire for failing to formally adopt the fishbowl memo and PEER says Jackson's stated support is insufficient. “This needs to be more explicit and enforceable, rather than 'Trust me.'" Adopting a formal policy on scientific integrity and openness would mean EPA employees who violate it “are subject to discipline and people who get in trouble for following the policy could use it as a defense.” Specifically, PEER wants Jackson to adopt policies forbidding alteration of scientific documents for non-technical reasons without public disclosure; banning adverse personnel actions or other discrimination in retaliation for voicing a reasonable scientific disagreement; revoking all existing gag orders; and to stating that agency officials responsible for decisions found to violate federal law will face discipline or removal from their jobs.
Posted by The Dake Page at 1:51 PM No comments: Links to this post

Major Initiatives to Get EPA Grants

The US Environmental Protection Agency (EPA) has a certain amount of money in its budget dedicated to providing grants and fellowships for research. With the new Administration taking over, the National Center for Environmental Research (NCER), within the Office of Research and Development at EPA, says that it intends to focus its research funding on issues relating to global climate change, as well as sustainability and the economics of ecosystems. The office is also seeking advice from an agency advisory group on emerging research so it can continue to set its priorities.
That advisory group - the Board of Scientific Counselors (BOSC) - will meet February 2-3 in Washington, DC to discuss what it sees as priorities for funding. The BOSC is also expected to provide advice on how to restructure the office's academic fellowship programs to offer more opportunities to undergraduates.
Besides climate change and sustainability, the NCER expects computational toxicology to be an "exciting area" of research. EPA is about to end the application period for $6.4 million in grants for computational models that address risks to the growing fetus.
Posted by The Dake Page at 4:16 PM No comments: Links to this post

These and forthcoming EOs and other Administration actions will no doubt have an impact on the way energy is used in the US. Obama has promised that "It will be the policy of my administration to reverse our dependence on foreign oil while building a new energy economy that will create millions of jobs."

But his actions will have impacts in many other parts of the world. For example, the oil industry in Alberta, Canada is wondering whether the shift in focus will mean less oil imports from Canada to the US. Currently, Canada is the single largest foreign supplier of energy to the U.S.--providing 17% of U.S. oil imports and 18% of U.S. natural gas demand. The change in US policy is making some companies think that they should emphasize that they are "energy" companies and not just oil/gas companies.

The US change in focus will also impact the balance of power in the world, an issue that hasn't been fully examined in the public media yet. The intention, of course, is to reduce our dependence on oil from the Middle East, Venezuela, and other political hot spots around the world. All one has to do to see the impact of this is to look at the increased political power gained by Iran, Russia and others when oil prices soared, then the rapid decrease when prices dropped again. True, other factors including the Iraq war and the global economic crisis also affect this trend, but there is no question that reduced demand from the US will change the political dynamics of many regions. But countering that is the rise in energy demand from China and India, who will likely soak up any reduction in US demand. That is why the US energy policy must take into consideration international interconnections, and why the US must become a global leader in ushering in a new era of sustainable energy policy worldwide.
Posted by The Dake Page at 1:36 PM No comments: Links to this post

Lisa Jackson, the incoming US Environmental Protection Agency Administrator, has identified her and President Obama's priorities for the EPA.

In an attempt to signal a change from the previous Administration Jackson states:

"EPA can meet the nation's environmental challenges only if our employees are fully engaged partners in our shared mission. Science must be the backbone for EPA programs. The public health and environmental laws that Congress has enacted depend on rigorous adherence to the best available science. The President believes that when EPA addresses scientific issues, it should rely on the expert judgment of the Agency's career scientists and independent advisors. When scientific judgments are suppressed, misrepresented or distorted bypolitical agendas, Americans can lose faith in their government to provide strong public health and environmental protection. The laws that Congress has written and directed EPA to implement leaveroom for policy judgments. However, policy decisions should not be disguised as scientific findings. I pledge that I will not compromisethe integrity of EPA's experts in order to advance a preference for aparticular regulatory outcome."

Jackson highlighted five priorities that would receive her personal attention:

2) Improving air quality: EPA will plug the gaps in our regulatory system as science and the law demand.

4) Cleaning up hazardous-waste sites: EPA will strive to accelerate the pace of cleanup at the hundreds of contaminated sites across the country.

5) Protecting America's water: EPA will intensify work to restore and protect the quality of the nation's streams, rivers, lakes, bays, oceans and aquifers.

Jackson is expected to be confirmed and begin work as Administrator shortly. She states that "EPA's strength has always been our ability to adapt to the constantly changing face of environmental protection as our economy and society evolve and science teaches us more about how humans interact with andaffect the natural world. Now, more than ever, EPA must be innovative and forward looking because the environmental challenges faced by Americans all across our country are unprecedented."
Posted by The Dake Page at 7:37 AM No comments: Links to this post