2014 set a record for the hottest year on record. 2015 beat that to become the new hottest year. And 2016 is well on its way to becoming the third year straight setting a new record for hottest year in global climate.

So much for the non-"pause."

NOAA released its April 2016 data this week and reported that April is the 12th straight month of heat records. It wasn't just the hottest April ever recorded, it was the biggest heat gain for April since global records began in 1880. The combined average temperature over global land and ocean surfaces was 0.10 degress C (1.98 degrees F) above the 20th century average. That's huge.

In the graphic above (larger here), all the pink and red are warmer than normal, with the darker reds showing the greatest warming. The blues and whites are areas where it was cooler in April. Not surprisingly, climate denial lobbyists like to talk about the small areas of blue and ignore the rest of the red planet.

This isn't just warming, it's staggeringly increased warming. And this is even though 2015 already showed a huge jump from the normal range of warming. In short, it's getting hot. Really hot.

NASA released its data a few days prior to NOAA and it also shows a record April and continuation of a long trend of record heating. There really is no way to deny the heating that has been taking place. Nor the cause, which is primarily human combustion of fossil fuels that is putting huge amounts of excess CO2 into the atmosphere and oceans.

The Arctic is melting

All of this heat is having a horrific effect on sea ice extent in the Arctic. We've seen a continuing trend towards reduced ice extent during the summer in the Arctic. This year it's been even worse. As noted many times, Arctic sea ice grows in the winter and melts in the summer (though not completely). This winter had the worst sea ice extent growth on record. Not only is that bad but it starts off the melt season with a lot less ice than normal, which is reflected in the current sea ice extent as of mid-May that is well below this time during the record season of 2012. (Larger here) 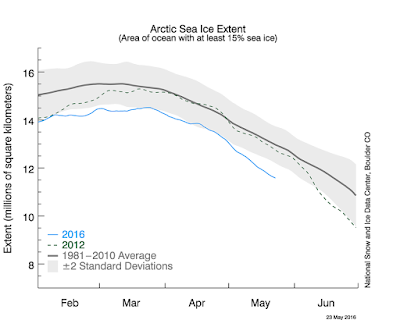 The annual minimum won't be until September and conditions could change, but with such a bad start it's entirely possible we could hit a record low ice amount this summer.

Just when you thought it couldn't get any worse, it does. At 320 miles above the Arctic Circle, Barrow, Alaska is the last place you would expect to lose snow cover. It's already melting. Alaska has experienced record heat and May 13th set the earliest snowmelt date ever recorded. It smashed the previous record.

The early melting follows a record-setting winter that saw temperatures average more than 11 degrees above normal...shattering the previous record set in 2015.


Worse, "an ominous series of openings, known as leads, extending deep into the Arctic" have opened up as sea ice is already showing signs of massive breakup. It's not pretty.

All of this doesn't bode well for the summer. This year (2016) is currently on track to break the global heat record set in 2015 (which broke the previous record of 2014), and we're on pace to have the worse Arctic melt year on record to boot.

While climate denier lobbyists desperately search for a "pause" in warming, the climate just keeps on getting hotter.
Posted by The Dake Page at 8:30 AM

FYI, Tim Ball is a paid lobbyist for the fossil fuel industry. He is best known for misrepresenting his credentials and denying basic science. He fronts a fossil fuel group deceptively called "Friends of Science." Ball is also one of Heartland Institute's "experts," i.e., disinformers. His views are routinely debunked.

Anyone interested in learning more about the lobbyist Tim Ball can check out: