James Hansen and Catastrophic Ice Melting - What it Means 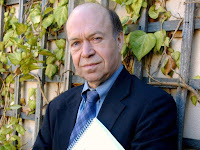 Unless you've been living under a rock (or perhaps the ocean) this week you've noticed a new paper by climate scientist James Hansen. He and 18 other scientists published a study called "Ice melt, sea level rise and superstorms: evidence from paleoclimate data, climate modeling, and modern observations that 2 ◦C global warming could be dangerous." As the overly long title suggests, the results are absolutely terrifying.

Let's take a quick look at this complicated paper, a PDF of which you can download for free here. Watch this short video abstract from Hansen (full transcript of video is here):

A brief note about James Hansen so you can access reliability. Hansen is the recently retired head of the NASA Goddard Institute for Space Studies, where for more than three decades he focused on climate science research. He has published over 300 (perhaps 400) peer-reviewed scientific papers in scientific journals. Hansen was one of the first scientists to give Congressional testimony highlighting the dangers of man-made climate change. In short, when James Hansen and colleagues publish papers, those papers have preeminent credibility.

Now, the study. I'll link to several places to read about it at the end of this post, and you should spend some time reading it. The paper is highly technical, so unless you're a science geek you probably don't care for all the details; in that case, check out the links for less technical discussions and highlights.

The most critical take away point is this: climate sensitivity may be way higher than the current estimate, which will mean we could see sea levels rise way beyond current predictions and way faster than assumed.

Hansen is talking about a rise of 2 to 5 meters (that's 6 to 15 feet, folks) by the end of this century. That's 5 to 10 times faster than current projections.

Among the arguments the paper makes is that in addition to the feedbacks we're aware of, there are slow feedbacks (changes in ice sheet size and increases in atmospheric CO2) that will "amplify the total Earth system sensitivity." In English, that means we'll see faster global warming and its effects. Melting of permafrost and ocean acidification also enhance warming dramatically.

By the way, "climate sensitivity" basically means the amount of increased temperature for every doubling of atmospheric CO2. We are well on our way to doubling that level and without significant worldwide reductions in carbon emissions we could see tripling or quadrupling. All of this warming causes greater melting of land-based ice sheets, which destabilizes oceanic temperature and current balance, which causes all sorts of changes and feedbacks that make the ice melt even more.

All of that is bad. Hansen and team note that if we burned all the fossil fuels remaining the climate would be uninhabitable, at least by humans. Even without that extreme we could be faced with catastrophic levels of warming.

So is Hansen right? It's obviously too soon to tell. Climate scientists are reviewing the study and it will be incorporated, along with other new studies and data, into the complete scientific body of work. Many climate scientists feel Hansen's work is persuasive, and his history of exceptional scholarship and collaboration with many of his former colleagues at NASA certainly gives weight to his findings. Some scientists may find that Hansen is overestimating the problem, but others are likely to find he is underestimating.

As the scientific analysis and further studies progress, we'll find out whether things are as bad as he says - or even worse. One thing is absolutely certain, however, even if he's overestimated we're still in a position where we desperately need to reduce carbon emissions, and we need to do it a decade ago. Based on the current data and analysis, things are incredibly bad. If Hansen is right, things are catastrophic.

More background on the study:

Hansen Study: Climate Sensitivity is High, Burning All Fossil Fuels Would Make Most of the Planet 'Uninhabitable'

James Hansen's Facebook page
Posted by The Dake Page at 8:30 AM No comments: Links to this post