John Kerry: Our Historic Agreement With China on Climate Change 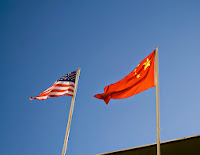 The science is unequivocal - human activity, primarily our emissions of carbon from the burning of fossil fuels, is warming the planet. It's happening, we are the dominant cause, and the ramifications on our economic and political stability, our economic and human health, and our social and societal values are serious. Action is necessary.

So says the IPCC, NASA, NOAA, the US National Academies of Sciences, the UK Royal Society, every other National Academy and major scientific organization around the world, and virtually every climate scientist. The world is warming, we are the cause, and we must take responsibility.

Which is why this week's surprise announcement is such an important step. As Secretary of State John Kerry notes in his Washington Post Op-Ed,


That fact is why the next sentence in Kerry's piece is so true:

"We need to solve this problem together because neither one of us can solve it alone."


Needless to say, this agreement cannot simply be lip service; it must be followed by action. The prospects for that action remain uncertain. In the US, the Republican Party, which just gained control of both houses of Congress, has been arguing for US inaction because "we can't solve the problem alone." This agreement removes that fallacious argument. And yet, the immediate reaction from the Republican Party to the promise of Chinese action was as expected - partisan and disingenuous.

Uncertainties in China also exist. China recently surpassed the United States as the largest annual emitter of greenhouse gases, though the United States and Europe remain the "champions" of total historical contributions. Chinese industrial growth will continue given their overall population, as will their reliance on fossil fuels for a long time to come. But China is also a leader in the development and construction of renewable energy sources such as wind and solar. Those realities are reflected in the terms of the agreement.

Clearly this is a first step, and a baby step at that. Political dynamics in both countries could negate these honest attempts to deal with the realities of man-made climate change. That would be both irresponsible and destructive to our mutual future economies. One hopes the Republican Party in the US and the authoritarian regime in Beijing will find that working for the common good of their respective nations and populaces will overtake the partisan dishonesty that is the rule.

The Presidents of the United States and China have shown leadership in a world afraid to be honest with the public. Let's hope others follow their lead.
Posted by The Dake Page at 2:06 PM No comments: