The Future of Government - Killing Programs That Don't Work 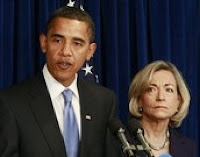 On January 7, 2009, President-elect Barack Obama introduced a new position called the Chief Performance Officer, and named Nancy Killefer to fill the position. Why? According to Obama: "We committed to change the way our government in Washington does business so that we're no longer squandering billions of tax dollars on programs that have outlived their usefulness or exist solely because of the power of a lobbyist or interest group."
That sounds good, but at the same time Obama is pushing for a stimulus package that will near a trillion dollars. He himself notes the financial hole that has been dug: "Just today, the Congressional Budget Office announced that the deficit we are inheriting for this budget year will be $1.2 trillion. And we know that our Recovery and Reinvestment plan will necessarily add more. My own economic and budget team projects that, unless we take decisive action, even after our economy pulls out of its slide, trillion dollar deficits will be a reality for years to come."
Wow. I have to give him credit for his honesty. He's pretty much saying - the economy is in the tank, and things are going to look a lot worse before we can turn it around. Kudos for being direct with the public for a change.
So while some initial steps will actually make the deficit worse, the long term goal is to take a closer look at where all the money goes. Some of the programs the government funds probably are wasteful and need heavy renovation, and some probably need to be tossed wholesale into the "recycle bin."
But which ones?
There are lots of pet programs getting funding that probably shouldn't be, while there are others that are underfunded. We're not talking about pork barrel projects or earmarks, we're talking about fundamental programs that have been going on for ages. Some of them surely don't work, others might work better if the goals and methods were tweaked, others might work better if their funding was increased.
So here's our chance. We whine and complain about this and that. How about we come up with a list of programs that should be shut down...or need renovation...or need more funding?
Let's see what kind of list we can build. Then we'll send it on to the incoming Administration. I hope Nancy Killefer has a big in-box.
Posted by The Dake Page at 4:10 PM No comments: Links to this post