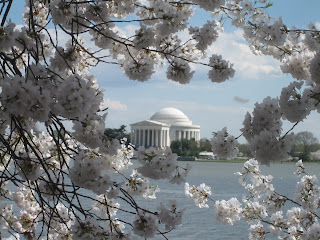 Washington DC Cherry Blossoms 2007
Posted by The Dake Page at 7:31 PM No comments: Links to this post

I was watching The Daily Show with Jon Stewart the other night, and he was making fun of some politician as usual. He had Doris Kearns Goodwin, author of "Team of Rivals" on the phone. Now "Team" is about Abraham Lincoln during the civil war, and the main theme of her book is how he gathered those rivals who most disagreed with him into his cabinet, figuring it was better to have them inside arguing their points rather than outside undermining the process. In contrast, Jon Stewart showed a clip of John Bolton, former Ambassador to the United Nations, saying that, of course President Bush only surrounds himself with those who agree with him, after all, these are the people who elected him and why would he want to give anyone else a dissenting voice.

Frankly, this is more than a bit scary. If I recall, Bush gained the presidency in 2000 by a narrow margin of electoral votes (and a Supreme Court judgment) after losing the popular vote. Even in 2004 his victory margin was small, and despite a "don't change horses in the middle of a war" attitude, again it came down to a somewhat controversial electoral vote. My point here is not to rehash the elections - President Bush won both elections fair and square and within the legal constraints of our election system. No, my point is that in both elections the populace was fairly evenly divided, with roughly half of the voters choosing the other guy.

So to cater to the side that voted for you as if it were some sort of mandate is patently ridiculous. As Lincoln so eloquently noted (alas, eloquence is not a Bush forte), government should be "of the people, by the people, for the people." Meaning, of course, that the President is elected to govern for everyone in the country, even those who didn't vote for him. I'm not suggesting he kowtow to the "anti-anything-Bush" Democrats or radicals on the left, but perhaps a little more attention to the views of the center might be in order. Consider this - the administration has been so partisan, so "I'm right, you're wrong" in all of its actions - that Senate majority leader Harry Reid can get away with saying something inflammatory like (and I paraphrase), Bush has to remember he is President of the United States, not King of the United States. When such a statement brings nods of agreement from such a large proportion of Americans, clearly something is wrong at the top.
Posted by The Dake Page at 8:39 PM No comments: Links to this post