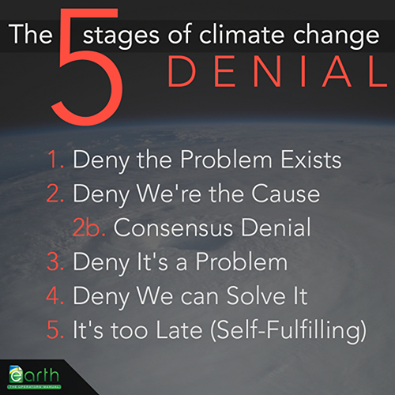 To follow up on my last article, in which I acknowledged the rather obvious fact that Republicans are behind the curve on global warming, the question that begs to be answered is, how does one deal with climate denial? More specifically for this post, does ridiculing climate deniers work? The answer is: sometimes yes, sometimes no.

A year after he proposed action on climate change, and in support of the new EPA rules that will impact coal-fired power plants, President Obama has mocked climate deniers in Congress. On several occasions he has chastised Republicans for using the line "I am not a scientist," usually followed with some sort of denial of the science and/or excuse for inaction. In the Huffington Post article just linked, Obama was quoted:

“Today’s Congress, though, is full of folks who stubbornly and automatically reject the scientific evidence about climate change,” he said. “They’ll tell you it’s a hoax, or a fad.”


I'll pause here to remind readers that virtually every climate scientist, every National Academy, every major scientific organization, millions of empirical data points from more than 100,000 published scientific research papers, and the basic physics of the atmosphere known for over a century all unequivocally demonstrate that we are warming our planet. This has reached the point of being scientific fact.

For years a handful of Congressmen, almost exclusively Republicans but sometimes including Democrats from states whose economies are dependent on fossil fuel facilities, have claimed climate change somehow isn't real. To discredit all the world's science, these congressmen will rattle off talking points created by fossil fuel lobbying organizations. Which is why you suddenly hear them mouthing almost verbatim the lines being used by others in separate interviews.

One such "I got the memo moment" is the use of the aforementioned "I am not a scientist" line. It's clear that with the recent IPCC, NAS/Royal Society, AAAS, the National Climate Assessment, and many other scientific reports reinforcing the fact that human activity is changing our climate, the lobbyists have handed down new instructions. Since outright denial would look bad (not that that stops everyone), the new mantra suddenly became "I am not a scientist." But we all know the meaning, right? Obama sums it up nicely:

“Let me translate," he said. "What that means is, ‘I accept that manmade climate change is real, but if I admit it, I’ll be run out of town by a radical fringe that thinks climate science is a liberal plot.'"

So will ridiculing climate deniers get them to stop denying the science? In some cases, perhaps yes.

For example, if the ridicule exposes the pandering to fossil fuel interests at the expense of constituents living in the state of the denier, it might sway public opinion enough to influence a policy change. One obvious exemplar is Senator James Inhofe of Oklahoma, who has declared "global warming is a hoax" for so many years he is beyond feeling embarrassed by its lack of veracity. On the other hand, Oklahoma is prone to severe drought, a condition that is likely to get more frequent and more severe the longer Senator Inhofe and others choose to delay action. Rather than explain this to his constituents and work toward policies that will enable a shift for working Oklahomans from the dying fossil fuel industry to the growing renewable energy industry, Inhofe has chosen to sacrifice his constituents future for continued short-term campaign contributions from his present corporate contributors. If Oklahomans understood that they are being held back from future economic growth, perhaps they would change Inhofe's behavior or replace him with someone more attuned to their interests instead of his own campaign interests.

The same could be said for other key politicians. If it is clear that the unequivocal science is being denied for expediency or self-interest while ultimately that denial is counter to the interests of people living in the state, people will eventually force a change in behavior.

On the other hand, sometimes ridicule is not an effective mechanism. Several studies have shown that providing more data actually causes people to hunker down in a defensive posture, i.e., become even more sure of their absolutely false view. This is common for ideological followers who have tied their self-worth to an ideological position. Having done so, anything that shows that position is false now is interpreted as a direct attack on the person rather than the position or the facts.

Which gets us back to "I am not a scientist." The catchphrase that suddenly emitted from the mouths of several politicians could actually be seen as a positive step forward, should it continue and not revert back to the even more laughable "hoax" bumper sticker. By admitting that they aren't scientists, politicians are tacitly acknowledging that they trust scientists and will rely on the science. They obviously haven't reached the point where they are acknowledging the unequivocal science already out there, but it does suggest that eventually they may do just that. The more ridiculous the denial becomes in the face of reality, the more likely this "I am not a scientist" will morph into "scientists say so...here is the action that I propose to deal with it."

Then we can get down to discussing honest differences in opinion about how best to take action.

Bottom line? While scientists must continue to produce the science and present the science and correct misinformation about the science, there may actually be some advantages to the use of ridicule by politicians and the advocacy community. It should not be overdone as that would diminish credibility. But using the above exemplar of Senator Inhofe as a starting point, perhaps opposing politicians (in both parties), along with local community advocates, can focus on both the ridiculousness of his climate denial position and the disservice he is doing to his constituents across Oklahoma. The same could be done at the local and state level across the country to encourage constituents to demand action dealing with the science rather than wait for the consequences of inaction caused by denial that borders, and often surpasses, the ridiculous.
Posted by The Dake Page at 10:49 AM No comments: