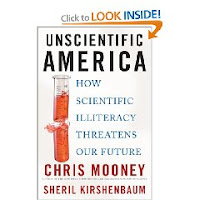 I’ll start by highly recommending this book. Especially to scientists or those interested in science. As suggested by the title – Unscientific America: How Scientific Illiteracy Threatens our Future - the book acknowledges the limits of the public’s understanding of science and how science works. But I felt the book was most powerful because it focuses on the role of scientists in disseminating scientific information. More on that later.

One chapter discusses the role of blogs. As newspapers and broadcast media have been eliminating science coverage, at least 1000 science blogs have sprung up. While blogs can help disseminate information broadly, the authors say “[t]he problem with the internet is obvious to anyone who has ever used it; There’s tons of information available, but much of it is crap.” Misinformation thrives, and those who want to manipulate the debate can publish whatever they want, and unfortunately, usually do. Much of it is biased, inaccurate, or outright fabrication. Which is why blogs may be useful for rapidly getting the word out, they cannot be relied upon for an accurate assessment of the science itself.

The authors refer repeatedly in the book to Carl Sagan, an astronomer who was also a stellar communicator, but whose popularity was often seen by other scientists as an indignity (i.e., to traditional scientists who preferred to do their science and leave the communication to others). But in the end the authors of Unscientific America, one a journalist and the other a scientist (who together write a blog called The Intersection), assert that disseminating the science to the lay public, to the media, and to policy-makers is an “integral part of the job description of scientists themselves.” Essentially, they say that it should be part of every scientist’s responsibility to communicate the science accurately, and to make sure that the science is not misrepresented by those who would misuse it.

The book is eminently readable (I read it in it’s entirety on a cross-Atlantic flight) and surprisingly insightful. I highly recommend the book; it is definitely worth the read.

Other book reviews
Posted by The Dake Page at 7:44 AM No comments: Links to this post