It is altogether fitting and proper, so it seems, that much of the United States and Europe is experiencing ridiculously balmy weather for Christmastime in 2015. After all, 2015 will be the hottest year on record when it comes to global climate.

Every climate research scientific organization has confirmed that last month was the hottest November on record, following on the heals of the hottest year to date on record. With December on its way to a likely record itself, 2015 is guaranteed to be the hottest year ever experienced in the global climate record. Lest anyone forget, the previous record hot year was 2014. Given the continuing presence of El Nino conditions (a record-setter in its own right), the prospects of 2016 becoming the third record-breaking year in a row are significant.

This is why deniers look so silly when they claim "there has been no warming in 18 years." The statement is so patently false it's buffoonish. In fact, even the "charts" used by deniers prove they are lying.

The eastern United States epitomizes on a grand scale the warming. "In many places in the East, temperatures will run some 30-40 degrees above normal." It's so warm that in some cities the low temperatures may exceed the record high temperatures for that spot. 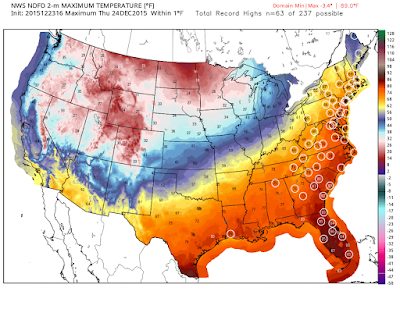 Excess heat isn't limited to the eastern United States; Europe is seeing it too. Record temperatures are being seen in Helsinki, Sweden, Estonia, London, and even Moscow. Ice rinks in Moscow are ponds. "In the Italian Alps, ski stations have had to resort to artificial snow, cherry blossoms have been spotted in Dresden in Germany, and daffodils are flowering in England."

Of course, a Christmas heat wave in one part (or two parts) of the world is not the entire world, so what do the full data for 2015 worldwide tell us? As already noted in the second paragraph above, it tells us that 2015 is guaranteed to be the hottest year ever recorded on a global basis. In late November the World Meteorological Organization (WMO) confirmed that 2015 was well on its way to setting a new global heat record, as well as the warmest 5-year period. Yesterday the WMO confirmed that Europe would experience the second hottest year ever, just barely below the hottest year set last year. WMO noted that:

Globally, 2015 remains on track to the hottest year on record, according to WMO's provisional statement on the status of the climate in 2015. Final figures will be released in early 2016.

In short, 2015 will be the hottest year ever, passing 2014. And 2016 will start off on a fast pace in its attempt to set yet another record. You can get a feel of what that means in the following graphs from NASA (yellows to oranges to reds to dark reds show increasing mean surface temperatures above the baseline). More NASA charts of global temperature can be found here.

So will we never see snow again? Of course we'll see snow (as Denver and other spots in western U.S. will attest); the fact that the planet is getting warmer doesn't mean winter disappears. We may even see loops of Arctic vortex drop down into lower latitudes periodically and heavy snowfalls like we saw last winter in the northeastern U.S. and elsewhere. But global warming does mean we'll have to deal with all the ramifications of a warming climate, and those ramifications are both significant and impact virtually all of the world's 7 billion and growing population. That is why the recent Paris climate agreement is so important for our future.

Merry Christmas, and all that jazz.


Read more at: http://phys.org/news/2015-12-climate-grinch-stole-europe-christmas.html#jCp
In the Italian Alps, ski stations have had to resort to artificial snow, cherry blossoms have been spotted in Dresden in Germany, and daffodils are flowering in England.

Read more at: http://phys.org/news/2015-12-climate-grinch-stole-europe-christmas.html#jCp
Posted by The Dake Page at 10:31 AM No comments: Links to this post