The testing of chemicals for health and safety has been a big issue for a long time, but recently there has been heightened awareness of the problem.  The potential of Congressional action to reform the nation's chemical control law and comments being offered from all quarters on the sufficiency, or lack of sufficiency, of chemical testing has helped show some of the shortcomings in our assessment process.  Now eight scientific societies have offered the expertise of their 40,000 research scientists and clinicians.

In a letter published in the prestigious scientific journal "Science," the societies note that "the need for swifter and sounder testing and review procedures cannot be overstated." They warn that "recent scientific evidence has established direct links between exposures that occur during fetal development and adult disease."  The point out that biomonitoring data collected by the Centers for Disease Control and Prevention (CDC) "have established that most, if not virtually all Americans, are exposed to contaminants in the environment that cause serious health effects in animal models."

One important point made by these societies, which are generally medical, genetic, reproductive health type societies instead of the traditional toxicology societies, is that there is a need to develop and validate "improved testing guidelines and better methods of assessing risks." These new methods could move away from animal models and include non-animal markers such as endocrine function, genomic fingerprinting, and other less invasive and perhaps faster and more sensitive types of studies that could be used to more rapidly identify chemicals for more in-depth study.

And so they are offering their help.  Addressing their letter mainly to the FDA and EPA:


"We ask that you use our scientific boards to provide access to leading scientists in diverse fields. These experts can help ensure that the most up-to-date scientific methodology and scientific understanding are used when devising and refining regulatory guidelines, and when reviewing scientific data pertinent to risk assessment and risk management decisions."

The letter is in the most recent issue of Science.  The eight scientific societies are (click on the name for more information about each):

Posted by The Dake Page at 2:10 PM No comments: Links to this post 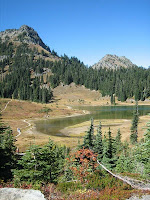 A new study in the journal Climatic Change by scientists at Oregon State University suggests that the Pacific Northwest, a cherished old-growth forest region of the US, could lose virtually all lodgepole pine trees by 2080.  Researchers say that warming temperatures have changed the ecosystem dynamics such that conditions favor increased infestations by bark beetles.  The combined effects of global warming appear to be driving the effects already seen, and continuing warming is likely to make conditions even worse.

Part of the problem is that warming temperatures have reduced the spring frosts that inhibited the growth of competing trees.  Without them the soil has less moisture and more adaptable trees like Douglas fir are able to move into the areas previously dominated by lodgepole pines. For centuries lodgepole pines have dominated higher elevations in the Cascades (along the Pacific US) and the Rocky Mountains (further east).  This may not be the case a century from now.

The researchers estimate that lodgepole would cover "less than 6,000 square miles in America" by the year 2080, which is only "about 17 percent of its current range."  This change in ecosystem dynamics is important, as lodgepole pine is one of the first species to repopulate areas that have been decimated by fire.  They also can get a start growing in post-volcanic soil, a critical attribute in the active volcanic region that characterizes the Cascade range. [Remember Mount St. Helens, anyone?]  But now the trees are being hard hit by both soil conditions and bark beetle infestations.  Recently the Agriculture Secretary, Tom Vilsack, had "to allocate $35 million for tree removal" in the Rocky Mountains because beetles had killed more than 5,000 square miles of lodgepole pine and spruce forest."  And that is just since the late 1990s.

The abstract of the study in Climatic Change can be viewed here.

Source article by Jeff Barnard in the Seattle Times.
Posted by The Dake Page at 1:49 PM No comments: Links to this post

The deadline for reporting greenhouse gas (GHG) emissions is March 31, 2011.  Or not.  Yesterday the EPA announced that it was "extending this year’s reporting deadline" so that it could provide a reporting tool to affected industries.  EPA noted that after "conversations with industry and others, and in the interest of providing high quality data to the public this year," the deadline would be delayed.  The agency will finalize what it calls a "user friendly online electronic reporting platform," which they hope to have available this summer so that the data can be received and published later this year.


The GHG Reporting Program is being designed to address mandates from Congress, even as the new Congress is working to limit EPA's ability to follow through on those mandates.  Despite the likelihood of budget cuts EPA is continuing to develop GHG data reporting requirements "for a wide range of different industries."  According to EPA:


This program will provide Congress, stakeholder groups and the public with information about these emissions while helping businesses identify cost effective ways to reduce emissions in the future.

EPA says they need the extension "to further test the system that facilities will use to submit data and give industry the opportunity to test the tool, provide feedback, and have sufficient time to become familiar with the tool prior to reporting."
More information on the Greenhouse Gas (GHG) Reporting Program can be read here.
Posted by The Dake Page at 10:55 AM No comments: Links to this post

By now readers should know that REACH is the EU's chemical control law, the Registration Evaluation Authorization (and Restriction) of Chemicals regulation.  November 30, 2010 was the deadline for manufacturers and importers to register their hazardous or high production volume chemicals.  And now the European Chemicals Agency (ECHA) has released a report evaluating registration dossiers, as well as substance evaluations.  The goal is to summarize progress to date and provide useful feedback to future REACH dossier submitters.

There are actually three different evaluation processes. One is the "compliance check," in which ECHA "examines the quality and adequacy of data provided by the registrant." The second is examination of "testing proposals," in which ECHA "decides whether testing is necessary and may then provide permission for the tests to be performed." The third is "substance evaluation," in which the Member States prepare a dossier on chemicals they believe "there is a suspicion that certain uses of a substance may cause harm to human health or the environment."


The Evaluation report concludes that there were "quality problems in a considerable proportion of dossiers in 2010," though ECHA is still in the early stages of review. In an effort to improve future submissions, the gives specific recommendations for registrants, including:
The full Evaluation progress report for 2010 can be downloaded as a PDF file here.
Posted by The Dake Page at 11:15 AM No comments: Links to this post

With No Federal Action, Wal-Mart Takes the Lead in Banning Chemicals - Is Retail Regulation the Future?

Is retail regulation the wave of the future?  At this site I have talked a lot about the attempts to reform the Toxic Substances Control Act (TSCA).  So far TSCA reform efforts have failed to produce any federal action to modernize the now 35-year old law.  But now, into this gap in federal-level regulation have come the "retail regulators."  Retail regulation is when influential retail stores like Wal-Mart, Toys-R-Us and Sears make unilateral buying decisions that could effectively ban chemicals of concern.  Call it The Wal-Mart Factor.

A recent article by Lyndsey Layton in the Washington Post discusses how Wal-Mart is "stepping ahead of federal regulators and using its muscle as the world's largest retailer to move away from a class of chemicals researchers say endanger human health and the environment."  Those chemicals, polybrominated diphenyl ethers (PBDEs), have been used as flame retardants in a wide range of consumer products, including computers, furniture, and toys.  With a worldwide buying power rivaling many national economies, when Wal-Mart speaks, manufacturers listen.  And since manufacturers and formulators aren't likely to make one product for Wal-Mart and another version of the same product for other distributors, chemical bans by Wal-Mart have the ripple effect of eliminating chemicals from products sold elsewhere.

As the article points out, this is not the first foray into retail regulation by big box stores.  Toys R Us, Sears, Kmart, Whole Foods, and others have started telling suppliers that products containing chemicals such as BPA, PVC, PBDEs and others will no longer be accepted.  This is caused many suppliers to reformulate their products to replace components of toxicological concern with those that are less hazardous.  The result, in effect, is a market-based ban on certain chemicals.  Though it should be clear that the reason Wal-Mart and the other retailers have made the decision to ban is because state legislatures have been taking action to limit chemicals in which health and safety studies have raised concerns.

Since unilateral decisions by retailers and varied state-level action could create a patchwork of "regulation" across the country, this would seem to be more impetus for moving forward with federal-level action.  Such federal action should include a modernized and rational TSCA reform legislation that encourages both innovation by retailers and manufacturers and protection of human health and the environment.
Posted by The Dake Page at 10:41 AM No comments: Links to this post