CO2 and other radiative forcings of global warming


In my last post I talked about the gases that are known as "greenhouse gases," that is, the ones that control the temperature of our planet. The three main greenhouse gases - water vapor, CO2, methane do virtually all the work even though they make up only a very tiny part the atmosphere. And as I said already, water vapor (H2O) is actually the biggest contributor to the greenhouse effect (between 66% and 85%), but its effects are generally short-term because if too much gets in the atmosphere it just rains or snows out. [It's a bit more complicated than that so I'll go deeper into water vapor in a future post, but this is sufficient for now]

I had intended to go right into the importance of CO2 and methane in this post but it became clear that a quick discussion of radiative forcings was first necessary (I'll go into feedbacks in a future post). Please click on the links for additional description of each term mentioned. In short, radiative forcings are whatever factors that drive or "force" the climate system to change. Some are natural, some are not. And some are a bit of both.

I've already mentioned the main greenhouse gases that are forcings: CO2, methane, and to a lesser extent halocarbons (e.g., refrigerants), nitrous oxide (laughing gas), ozone, aerosols (small droplets), and contrails from airplanes (the white "clouds" you see behind the plane). Another forcing is the land surface albedo, which is the amount of light reflected off the land surface. For example, the whiteness of ice and snow has a high albedo because white reflects better than, say, the dark coloring of lakes and oceans. Humans impact the land surface albedo by deforestation (which increases the albedo) and industrial activity that deposits black carbon on snow (which decreases the albedo). Overall, the total land surface albedo-based forcing is a net cooling and minor compared to the effects of greenhouse gases. You can read more about the basics of albedo here since it's an important concept we will come back to later.

The chart below shows the relative contributions of the main forcings (IPCC, AR5, WGI, Fig. 8.20). Bars extending to the right mean warming, bars to the left signify cooling. It's easy to see that CO2 is the biggest driver of warming. The yellowish bar near the bottom is the total anthropogenic, i.e, man-made, contribution to warming. 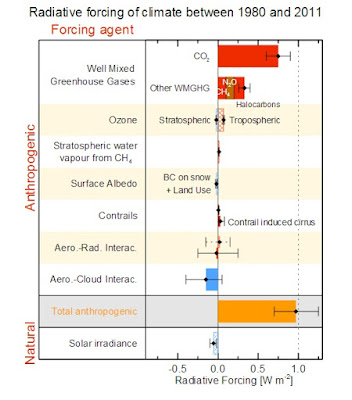 There are a couple of other forcings that we don't have any control over - solar intensity (or solar irradiance) and volcanoes. The brightness of the sun varies naturally over time.  Sunspot cycles of about 11 years are the most obvious variation in solar intensity. There is also the ultraviolet (UV) light intensity, which would be absorbed by ozone and contribute to warming. But the planet's temperatures have been increasing with no correlation at all to the 11-year sunspot cycle, and if it were UV it would mean the upper atmosphere would warm first, and that is the opposite of what is actually happening. In fact, solar intensity has been decreasing for decades while temperatures have been rising. You can see from the bottom bar in the graph above that solar irradiance actually has been contributing a slight cooling effect, far overwhelmed by the warming effects of CO2 and other greenhouse gases. Take all together, the totality of the data clearly demonstrates that it is not the sun that is causing the warming we observe.

Finally, as we all know, volcanoes don't erupt very often, especially big ones that can impact climate for a significant period of time. When they do happen they inject both CO2 and sulfate aerosols into the atmosphere. The warming effect of the CO2 emitted from volcanoes competes against the cooling effects of aerosols and particulates, so most volcanic eruptions actually have a net cooling effect. That effect only lasts for days or weeks. Even the incredibly strong eruption of Mount Pinatubo in the Philippines in 1991 only impacted climate for a couple of years. Also, the amount of CO2 emitted by volcanoes is only about 1% of what is emitted by human activity, so volcanoes aren't causing our climate change, humans are.

Okay, enough with the forcings already (yeah, I can hear you say it). In the next post we'll take a look at CO2 and why it is the primary driver of man-made climate change.

[This is part of a series of posts explaining the basic science of climate change. More posts will be added weekly.]

Posted by The Dake Page at 8:30 AM 2 comments: Links to this post