The House of Representatives Energy and Commerce Committee’s Subcommittee on Commerce, Trade, and Consumer Protection has announced it will hold a hearing on “TSCA And Persistent, Bioaccumulative, And Toxic Chemicals: Examining Domestic And International Actions.”

The hearing is scheduled for next Thursday March 4.

As of this writing, no witnesses had been identified. I will update as soon as I know.

It is highly likely that a TSCA reform bill will be introduced very shortly. I believe that whatever window of opportunity that occurs in March when Senator Lautenberg is healthy enough to do so, he will introduce the bill in the Senate, with the House following suit with a mirror bill.
Posted by The Dake Page at 9:59 AM No comments: Links to this post

Are "Chemicals of Concern" Lists Really Blacklists for Chemicals?

As the TSCA reform process moves in fits and starts, with serious questions being raised recently because of the poor health of its major sponsor, Senator Lautenberg, and the continuing anti-science politics of the ranking minority member, one question floats to the surface. Does creation of a "concern list" mean that those chemicals will become blacklisted on the marketplace?

Many countries have what can be called "negative lists," that is, lists of chemicals that the country believes are in need of either greater scrutiny to discern risk, or where risk has already been found to be unacceptable and the chemicals are slated to be banned or severely restricted. Besides the country by country lists, there are also international negative lists of chemicals to be banned or restricted, e.g., the persistent organic pollutants and CFCs in the Stockholm Convention and Montreal Protocols. There are also "positive lists" in which chemicals are added after they have been evaluated and found to be safe. It's possible we may be headed in the positive list direction with the new TSCA, but for now let's focus on the negative lists.

EPA has indicated in its recently released "action plans" that it will use one of the authorities it already has under the existing TSCA law to create what is called a Section 5(b)(4) Concern List. In Europe, the REACH regulation, which requires registration of all chemicals, both existing and new, also has a separate track called Authorization (the "A" in REACH). Under Authorization the new European Chemicals Agency periodically publishes a list of "candidate chemicals" that are "substances of very high concern" that will then be evaluated for possible banning and restriction.

The result of these "negative lists" is the same as for other negative lists, including ones such as the Wal-Mart list of chemicals they do not want to see in their products. Formulators and end product makers get pressure from consumers to remove these "bad chemicals" from their products, so they start to push back on their suppliers, who push back on the manufacturers of the basic chemicals, who start looking for alternatives that provide the same functionality without the risk.

So is this a good thing? Well, yes and no. Often a chemical gets targeted not so much for its actual risk but for its perceived risk or for its hazard, which because of the lack of exposure may actually not cause a risk at all. On the other hand, without any kind of pressure to replace inherently hazardous materials with inherently less hazardous ones, there isn't any incentive for companies to find alternatives. Why would a company spend a lot of money doing R&D to find a chemical to replace one that they already make, has extensive market penetration, and brings them significant profit? They won't, at least unless the manufacturer believes that some future event or change in attitudes or policy will cause his original chemical to become less favorable to the market. For market forces to work there has to be the potential for significant upside return on investment. Consumers have indicated they are willing to pay a little more to purchase more sustainable products, though it is often difficult to know if new products, e.g., cleaning products, are "green washers" versus "greenwashing." But without there being a way to identify "problem chemicals," the consumer has no way to make informed choices in the market place. Thus their only recourse is to assume that all chemicals in all products have been adequately tested and found to be safe. Consumers have come to realize that that is not the case and thus are less willing to simply take it for granted. Hence, the reason why negative lists may be one mechanism to encourage greater review of chemical safety.
Posted by The Dake Page at 3:26 AM No comments: Links to this post

State of Maine Adopts Regulations to Protect Public from Chemicals 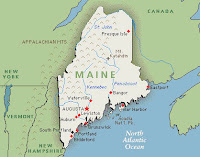 As noted previously, the individual states are acting in the absence of a new federal level reform to the Toxic Substances Control Act (TSCA). This past week the Maine Board of Environmental Protection unanimously adopted the final regulations implementing a chemical policy law enacted in 2008 by the Maine Legislature.

Specifically, the new rules are designed to protect the public, especially children, from toxic chemicals in consumer products and toys. The 2008 law required the Department of Environmental Protection to create and regularly update a database of chemicals that they've determined to be unsafe. In compliance with that requirement, in July of 2009 the DEP released a list identifying 1,300 chemicals.

More information can be found here.
Posted by The Dake Page at 3:35 AM No comments: Links to this post

This past week the Office of the Inspector General, which is part of the USEPA, released a report called "EPA Needs a Coordinated Plan to Oversee Its Toxic Substances Control Act Responsibilities." The report concludes that "EPA does not have integrated procedures and measures in place to ensure that new chemicals entering commerce do not pose an unreasonable risk to human health and the environment." They found limitations in three key processes - assessment, oversight, and transparency.

The OIG report recommended that EPA better coordinate risk assessment and oversight activities by establishing a management plan, establish criteria for selecting chemicals for low-level exposure and cumulative risk assessment, and development a management plan for TSCA enforcement. This last point is critical as the current enforcement activity is woefully funded and barely staffed. You can read the full report here and a critique by EDF scientist Richard Denison here.

Those who have been following the TSCA reform process will know that this isn't the first analysis of the weaknesses of TSCA. The GAO has had a series of reports over the years, and the common theme is that the data requirements of the 1976 law simply do not give EPA sufficient information to adequately protect human health and the environment. As I have been reporting, EPA has been working hard this past year to use it's current TSCA authority to the fullest, but even aggressive use of that existing authority cannot change the fact that EPA is, as Senator Lautenberg noted during his opening remarks at the recent Senate hearing, trying to do its job "with one hand tied behind its back."

The new TSCA will undoubtably have a base set of data that is required for new chemicals, and some mechanism for reviewing the Inventory of existing chemicals. If written correctly, it should allow enough flexibility for data to include not only the usual animal testing but also, and perhaps even in particular, non-animal data such as QSARs, read-across from similar chemicals, in vitro studies, and the new crop of testing being developed as part of the recommendations from the "Toxicity Testing in the 21st Century" report.
Posted by The Dake Page at 4:28 AM No comments: Links to this post

On Friday, February 19, 2010, EPA published in the Federal Register a proposed rule to revise the procedures for developing Enforceable Consent Agreements (ECAs) to generate test data under TSCA. This seems to be yet another way that EPA is using the current TSCA authority to its fullest ability, as Administrator Lisa Jackson indicated she would do when she first took over the Agency.

According to the Federal Register notice, the main features of the ECA process that EPA is proposing to change include "when and how to initiate negotiations and inserting a firm deadline at which negotiations will terminate." There is also a proposal to amend several sections of 40 CFR part 790 to put all the ECA provisions in one section and the Interagency Testing Committee (ITC) information in a separate section.

ECAs are agreements between EPA and the manufacturers of chemicals to conduct specific testing on a particular chemical substance. They help provide data to EPA that then can be used to make assessments. But the key is that the ECA procedure gets data to the Agency without the Agency having to first make risk or exposure findings (which is hard to do without the data they can't request before they do it) or to promulgate a Section 4 test rule (which takes forever to do).

But the average time to negotiate an ECA has been two years, with negotiations for several chemicals taking much more than two years. And that is just to negotiate the ECA, after which the company would have several years to complete the testing, then another period of time for EPA to evaluate the data, then more negotiations to determine the remediation path forward if a concern is identfied. On top of this, many ECAs that begin negotiations never get finished. So the idea of this proposed change is to make the ECA negotiation process more efficient, more flexible, and more transparent.

As noted, the proposed rule was published in the Federal Register on Friday and the comment period is now open. Comments must be received on or before March 22, 2010. After that EPA will evaluate the comments, make any necessary adjustments in response, and then issue a final rule with a date in which it will go into effect.

So it seems there continue to be two roads that both lead to changes in how chemicals are regulated. On the current road EPA is trying to move from a crawl to a walk and maybe to a run. But it's clear that the old dirt road of the past will be replaced with a new paved road of the future. The question remains, however, whether the new road will be a superhighway at rush hour or one at off-peak hours with respect to efficiency and efficacy.
Posted by The Dake Page at 3:21 AM No comments: Links to this post