Record Sea Ice Losses at BOTH Poles: This is What it Means

We've just hit the winter solstice - the first day of winter. And that means sea ice extent in the Arctic is going through its annual period of increase, which generally reaches a maximum around February before beginning its annual melting. And we are seeing an increase. But that increase is setting a record that we wish we weren't seeing because so far it's a record low.


Last year (that is, around February of 2016) we recorded the lowest Arctic sea ice extent in history. This year so far we're seeing that record low being broken. Now it's still early in the growth season so it might recover. Or it might not. Clearly the dropping sea ice extent in the Arctic continues the trend we've been seeing for decades. The ice is melting more than usual in the summer and its not growing back as much in the winter. 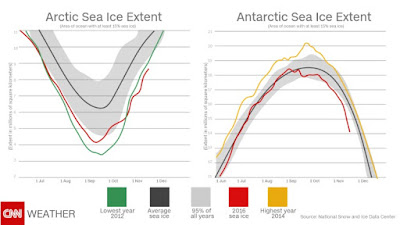 As bad as that is - and it is very bad indeed - we're seeing an even worse result right now in the Antarctic. Because the Antarctic is at the southern pole, the area is now going into summer. As of early December Antarctic sea ice extent was the lowest on record.

It is highly unusual to see record low sea ice extents at both poles at the same time. Of course, these early indicators could reverse as the seasons (freezing in Arctic, melting in Antarctic) continue over the next two or three months, but the overall trends are not giving us much hope for correction.

To make matters worse, the Arctic is seeing its warmest temperatures for this time of year ever. And not just a little warmer; temperatures are heating up to unbelievable levels that have climate scientists startled - at least 20 degrees Celsius warmer than normal. Temperatures have actually been above the freezing point. This is causing melting during a part of the year where the ice should be freezing.

Part of the reason in the Arctic is because this past year set a record low total ice extent for the year (a combination of the record low maximum and near-record low minimum). With warmer waters in the summer and early fall the ice growth never got a good start in the late fall and now winter. If the low ice extent maximum trend continues it creates a vicious cycle of conditions that will lead to acceleration of the downward spiral we've been witnessing for years.

The reasons for the low ice extent in Antarctica are harder to explain. It may be related to weakening of westerly winds that generally insulate the Antarctic from the effects of global warming. Or it might be related to the ozone layer. Or just dumb luck. Unlike the Arctic, the Antarctic is harder to define. One thing is clear, however, and that is that the Antarctic should be the last place we would see the effects of climate change. The fact that we are seeing them (e.g., destruction of west Antarctic ice shelf and more rapid movement of glaciers in the east Antarctic) suggests we may have reached a tipping point. The ramifications of any sudden melting of land-based Antarctic ice (along with melting of Greenland) will be dramatic, to put it mildly.

We'll have to watch what happens over the next few months - melting in the Antarctic and freezing in the Arctic - to see if these record lows continue. If you're not sure how to read the graphs, check out this quick primer. For the basics on how the Arctic and Antarctic are different, read here.
Posted by The Dake Page at 8:00 AM No comments: Links to this post