Should all sushi be banned to save the bluefin tuna? The EU thinks so!

Okay, technically the European Union isn't saying that sushi should be banned. But the EU has recommended listing bluefin tuna as an endangered species. And that could eventually mean that trade of the tuna most used in sushi does get banned. Which means we might all have to live with eating eel.

Most marine scientists agree that many fish species are severely over-fished. This had led to stocks so low that populations are no longer sustainable. Scientific advisors to the EU this week warned EU ministers of collapsing stocks of bluefin tuna in the Mediterranean Sea and the larger Atlantic Ocean. And with the EU behind banning trade of the delectable fish, it is highly likely that the same will happen next March at the next CITES meeting. For those who aren't familiar with it, CITES stands for the Convention on International Trade in Endangered Species of Wild Fauna and Flora, and is an international agreement between governments. According to its web site, its "aim is to ensure that international trade in specimens of wild animals and plants does not threaten their survival."

Not everyone agrees, of course. It should come as no surprise that Japan is actively lobbying to keep the current restrictions in place. These restrictions are much less onerous, something obviously more to the liking of a country that imports about 80% of the bluefin tuna retrieved in waters of the EU (not to mention elsewhere). Spain, Italy and Malta, all with large bluefin fisheries, are also not happy with the idea of any restrictions. On the flip side, several EU members, including France, the UK and the Netherlands, have publicly supported ending or suspending the fishing of bluefin tuna. In the end, the EU, however, votes as a block at CITES - fully 25% of the votes - so it is difficult for any one country to overturn a ban.

The EU’s position isn't final though, and may be revised pending additional information related to ongoing conservation efforts due later this year. And while the environmental unit of the Commission is strongly in favor of a complete ban, the Commission's fisheries unit is not keen on introducing additional regulation that could hurt the EU's fishing industry. Some argue that if the conservation efforts solve the over-fishing problem, a complete trade ban might not be necessary. In any case, the decision will be made in March 2010.

According to the European Commission's position paper, “[f]rom a scientific and technical point of view, the criteria for the listing of Atlantic bluefin tuna [as an endangered species] appear to be met...There is no doubt about the link between international trade and overexploitation of the species.”

Given my own marine fisheries experience, sometimes you have to just say no to fishing.
Posted by The Dake Page at 11:51 AM No comments: 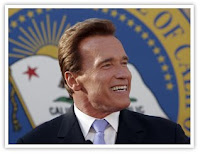 California Governor Arnold Schwarzenegger will reprise the tradition he started last year and host the second annual “Governors' Global Climate Summit 2” in Los Angeles from September 30 to October 3, 2009. This year he will boast some representatives from the current Administration in Washington, DC. The summit is being held in partnership with the United Nations Development Program (UNDP) and the United Nations Environment Program (UNEP).

This second annual summit is being co-hosted by Wisconsin Gov. Jim Doyle (D), Michigan Gov. Jennifer Granholm (D), New York Gov. David Paterson (D) and Connecticut Gov. M. Jodi Rell (R). Doyle also co-hosted last year's event, but the others are new as the other 2008 sponsors have moved on (Florida's Governor Crist to a run for a Senate seat, Kansas Governor Sebelius to Secretary of Health and Human Services, and Illinois Governor Blagojevich to talk radio [and perhaps jail])

The summit in part aims to gain UN recognition for so-called “sub-national” agreements between states and developing countries meant to reduce greenhouse gas emissions. Featured discussions and announcements at the summit are expected to include: reaching a new global deal in Copenhagen; the essential role of progressive states and provinces; urban area contributions and solutions to climate change; forestry solutions and recommendations to negotiators in Copenhagen; global strategies to address the inevitable impacts of climate change; and climate leadership in driving technological innovation and economic growth.
Posted by The Dake Page at 2:07 PM No comments:

Is the agency charged with ensuring chemical safety running out of money?

Chemicals are on everyone's mind these days, it seems. In the US there is talk of "reforming TSCA," the chemical control law that has been in force for over 30 years. In Canada they are prioritizing chemicals for further review. And in Europe, the chemicals agency created to manage the REACH process is struggling to keep its roughly $30 million a year budget.

The European Chemicals Agency (ECHA), which is based in Helsinki, Finland, is tasked with managing the Registration, Evaluation, and Authorisation of Chemicals (REACH) program. The problem is that its funding is dependent on registration fees that haven't started coming in yet. So to help fund it the European Union member states agreed to provide up front money, but due to the worldwide recession states are trying to cut back everywhere they can. And that might include ECHA.

Last year companies who manufacture or important chemicals in quantities of one tonne or more were required to "pre-register" their intent to keep the chemicals on the market. Pre-registration, which ended December 1, 2008, was free to companies, which meant no funds to ECHA. Registration fees vary by tonnage produced but can range up to around $70,000 per chemical and per legal entity. Given that many companies have several legal entities in Europe (e.g., different affiliates manufacturing the chemical in France, Germany and Italy, each one considered a legal entity), the fees going to ECHA can be large per chemical. While ECHA expected about 300,000 pre-registrations, the actual number was on the order of 2.7 million. So ECHA should be well-funded to handle the registrations once they come in.

But what about the period until then. The first registration deadline (for high quantity or more hazardous chemicals) isn't until November 30, 2010, and most of the pre-registered chemicals are slated for later deadlines. So until then ECHA is running on borrowed money, which according to ECHA's Executive Director, Geert Dancet, is barely sufficient to hire and train the needed staff (and get them to move to Finland).

All is not lost, as the European parliament’s environment committee voted recently to maintain ECHA’s annual budget, but this must still be approved by two other committees and the full Parliament. Dancet is relatively confident that he will get full funding for another year, just long enough for the large numbers of registration fees expected to arrive in mid 2010 as companies finish compiling the vast amounts of data needed to support the safety of their chemicals.
Posted by The Dake Page at 2:11 PM No comments: