The Soap and Detergent Association (SDA), a trade association representing the cleaning and laundry product industry for more than 80 years, will formally change its name to the American Cleaning Institute (ACI). The change, which is to officially take place in June of this year, was announced at the 84th Annual Meeting & Industry Convention being held this week in Florida.

The new logo is above, and the new tagline is "For Better Living," which is "what our products and ingredients are all about, describing how the cleaning products industry contributes positively to society." In their press release SDA (soon to be ACI) said:

"Under the ACI banner, the Institute will still reflect our organization's vision: to enhance health and the quality of life through sustainable cleaning products and practices," said Ernie Rosenberg, SDA President & CEO. "The Institute will continue to support the sustainability of the cleaning products industry through research, education, outreach and science-based advocacy."

More information about the switch and about SDA (ACI) can be found on their website at www.cleaning101.com. Other cleaning product news can be found here.
Posted by The Dake Page at 4:28 AM No comments: Links to this post 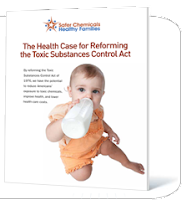 As I've been discussing, most stakeholders agree that some form of modernizing TSCA is inevitable, and necessary. The EPA and various groups representing public advocacy, the chemical industry, and workers have offered their principles for reform. And mostly at the principle level there is good agreement. The details are a bit more contentious.

According to the report, "[t]he Safer Chemicals, Healthy Families coalition believes that, by reforming TSCA, we can reduce our exposure to toxic chemicals, improve our nation’s health, and lower the cost of health care. This report documents some of the scientific findings and economic analysis underlying our position."

The report suggests that "chronic disease is on the rise" and cites increases in leukemia, various cancers, asthma, pregnancy difficulties, birth defects, autism, etc. The report provides a section reviewing each of these diseases. The coalition emphasizes that there are tremendous "health and economic benefits of reforming TSCA" and that estimates of the proportion of disease burden attributable to chemicals ranges widely "from 1% of all disease to 5% of childhood cancer to 10% of diabetes, Parkinson’s disease, and neurodevelopmental deficits to 30% of childhood asthma." While the group acknowledges that identifying actual cause and effect between chemical exposure and disease is extremely difficult, they emphasize that

"[w]hatever the actual contribution, effective chemical policy reform will incorporate the last 30 years of science to reduce the chemical exposures that contribute to the rising incidence of chronic disease. And any decline in the incidence of chronic diseases can also be expected to bring health care cost savings. Even if chemical policy reform leads to reductions in toxic chemical exposures that translate into just a tenth of one percent reduction of health care costs, it would save the U.S. health care system an estimated $5 billion every year."

A press release can be read here, and the entire report can be downloaded here.

Additional information on TSCA reform can be read here.
Posted by The Dake Page at 8:13 AM No comments: Links to this post

In 2009 researchers in China produced 120,000 research articles, second only to the 350,000 produced by the US. Ah, the US is still pretty far ahead, you say. Not so fast, because China's annual output is about 50% more than it had been just 3 years before (compared to about a 30% increase over the last decade for the US). And the trend is for increasingly rapid gains in output by the Chinese as the country puts more and more emphasis on developing the higher education and Universities that used to be where the US led the world.

And whereas the research budgets in the US and Europe have been rather flat for many years, China's investment in research and development has grown at about 18% per year, putting it third behind the US and Japan.

So what does this mean? Well, according to Jonathan Adams, Director of Research Evaluation at Thomson Reuters, writing in the journal New Scientist, "China's emergence as a scientific superpower can no longer be denied, and it is a quesiton of when rather than if it will become the world's most prolific producer of scientific knowledge."

He adds, "The question for the EU and the US as we enter the new decade is no longer about whether we should collaborate with China, but what we can bring to the table to ensure that China wants to collaborate with us."

In short, while some hold up our own scientific advancement with ideological gamesmanship, China is passing us by.

Read the full article by Jonathan Adams here.
Posted by The Dake Page at 7:39 AM No comments: Links to this post

In accordance with the Obama Administration's implementation of the mandate to increase transparency in operations, EPA has now made available online all of the senior manager's calendars, including that of Administrator Lisa Jackson. People can view all meetings attended by advocates, stakeholders, elected officials and others outside the Agency. The calendars don't detail meetings or briefings that only involve EPA representatives, nor do they provide minutes or other details of the meetings, but they do indicate where and with whom meetings were held.

The calendar page also is a good resource for identifying who the key players are at EPA.

The calendar can be found here.
Posted by The Dake Page at 3:34 AM No comments: Links to this post

In continuing their seemingly new-found enthusiasm for existing authority under the current Toxic Substances Control Act (TSCA), the USEPA is planning to issue a series of rules to better regulate nanomaterials. These materials are made small - very small - compared to other materials with the same chemical composition, and there is concern that they may have different risk profiles than their larger counterparts.

EPA announced in December 2009 as part of its "Action Initiation List" that it is developing a SNUR, shorthand for a "significant new use rule." SNURs require manufacturers of existing chemicals intended for significant new uses to notify EPA similar to the way they would if it had been a new chemical. The argument is that since nanoscale materials may have very different properties than the existing chemical form that they may result in very different risk. Not a big stretch given that most nanomaterials are designed specifically to impart different properties to the uses in which they are intended.

Another rule (under Section 8 of TSCA) was recently announced by EPA that would require additional reporting of such things as production volume, methods of manufacture and processing, exposure and release information, and available health and safety data. Taken together with the SNUR, these rules would give EPA substantial ability to better regulate nanomaterials.

So why is this a big deal? A couple of reasons come immediately to mind. One is that it significantly changes the Bush administration finding in 2008 that two vastly different forms of the same chemical would be considered "to be the same substance because they have the same molecular identity," despite acknowledging that "certain physical and/or chemical properties" may differ. Given that the physical and chemical properties can strongly influence the hazard of the chemical, the old designation would seem to be hard to justify.

Another reason it is a big deal is that this means that nanomaterials will be given much greater scrutiny than in the past. Which means most new nanoscale materials will have to go through the slightly more rigorous process for review of new chemicals than they would have if assumed to be existing chemicals (which essentially get no review).

Needless to say, not everyone is happy with the prospects of these new rules. But EPA has felt hamstrung in the past and seems under the current Administration to be more willing to aggressively use their current authority. These individual actions will no doubt be considered by Congress as they prepare the updated Kid Safe Chemical Act.
Posted by The Dake Page at 6:51 AM No comments: Links to this post