What is Happening to the Arctic? How to Read the Graphs

As 2016 starts off even hotter than the record-breaking heat of 2015 because of man-made climate change, one of the fastest warming areas of the planet is the Arctic. This year one of the key measures of Arctic "health" - sea ice extent - is showing signs of even more severe impact than normal. This fact has scientists fearful of a major speed up in climate change effects. It also has fossil fuel lobbyists scrambling to find new ways to deny the science.

So how do normal people (that is, us) know what's going on in the Arctic and elsewhere? This post gives a basic primer on how to read the graphs put out by the National Snow & Ice Data Center (NSIDC). The NSIDC collects data from a variety of sources and provides a monthly update. For this post I'll focus on Arctic sea ice extent as reported in NSIDC's Arctic Sea Ice News and Analysis page. As I write this the last update was in early February covering the status through the end of January. The next update will be in early March covering up through February.

One of the first things visitors to the see will be the "Daily Image Update" in the top right corner. As of today it shows: 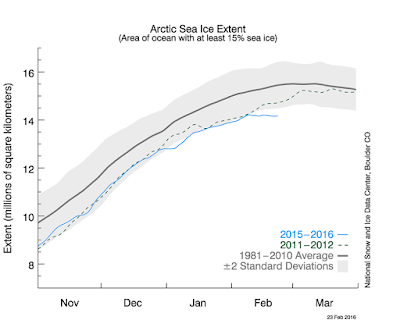 The graphic is fairly simple but shows a lot of important information. The bottom scale shows the months from November to March, so this represents the winter period where Arctic sea ice extent is expected to grow, which it does every year. [In the summer months it shrinks every year] The left scale shows extent in millions of square kilometers, but for now you don't need to worry about that; focus on the graph lines themselves.

See that thick black line running through the gray area? That represents the baseline sea ice extent from 1981 to 2010. It's essentially an average. One important point - that average was recently recalculated because all of the years after the end of the old averaging period were much lower than average. Therefore, the baseline has been lowered. What that means is that we should roughly see as many years over the average line as below. That hasn't been happening, even after lowering the bar. That's a bad thin. But let's not forget the gray area. That represents a range around the average. It gives you some idea of where the current year levels stand compared to the baseline years.

Which gets us to the solid blue (2015-2016) and dashed green (2011-2012), which represent the current year and the year with the record low ice extent. As you can see, the current year (blue line) is tracking well below the record low year. That's not a good thing, but we need more information so NSIDC also gives us the following graph, a bigger version of which can be seen here: 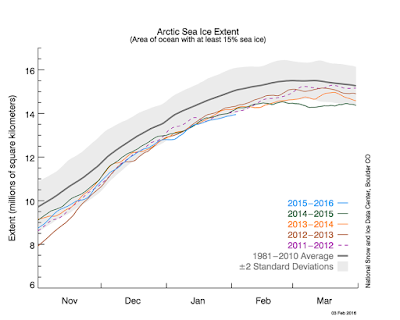 As you can see, this graph is the same as the previous one but shows several more recent years to provide context (note they changed the color of the 2011-2012 record year to purple instead of green, but it's still the only dashed line). You can see that the ice extent lines wiggle along; that's because short-term weather systems can either increase or decrease sea ice extent for any given time period, while man-made climate change is the reason for the longer trends. More on that shortly.

Want even more data? You can pick the years you want to plot on the graph with this handy Chartic Interactive Sea Ice Graph, which is also on the NSIDC page in the right hand column.

The graphs for 2015-2016 (the current winter) show that sea ice extent is dramatically lower than any other year. January was a record low and it looks like February will be too. Scientists are worried that we may have already seen the yearly maximum, which would be very early and dramatically lower than normal. It's from this point that the sea ice extent decreases until it reaches its yearly minimum (usually in September).

That doesn't necessarily mean we'll see a record low sea ice extent minimum this year. If you look at the Charctic Interactive graph you'll see that even though last year started out much lower in winter, it managed to reach only the fourth lowest minimum on record. That's not good at all, but it could have been worse. We won't know how bad this year will be until we reach the minimum, but based on where we're starting and the historic trend, we're pretty much assured it will be bad.

That gets us to the last graph I'll talk about today (larger): 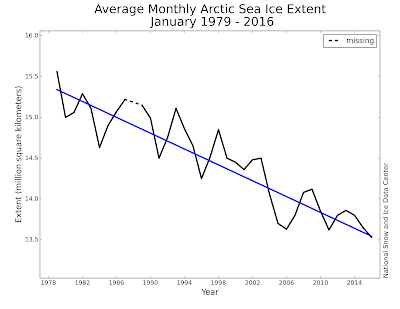 This graph is for January but you can pick any other month and it will reflect exactly the same trend.
What the graph shows is the trend for that month over the years, that is, what the sea ice extent is in January each year from 1978 to 2016. Because of those short-term factors that make the lines in the first graphs wiggle, you see some years where the January extent is higher and some years lower. But look at the trend. The blue line shows how the sea ice extent has been decreasing for decades. The end of the black (and blue) line to the right of the graph is this year, the lowest ever recorded. You can see that this isn't a one-off problem, it's the continuation of a long-term decline in sea ice extent. Again, this graph shows January but every other month shows the same downward trend.

There are more graphics and information on the Arctic Sea Ice and Analysis page, plus information on Antarctica, Greenland, glaciers, and other snow and ice-related topics on the National Snow & Ice Data Center website. These are accurate, scientific sources of information that readers should save for future reference.
Posted by The Dake Page at 10:48 AM No comments: Links to this post