EPA Kicks Off Initiative to Find Alternatives to Phthalates

The kickoff meeting of a partnership between the USEPA and interested parties was held August 24, 2011 in the Washington DC area.  The goal is for EPA and industry to work within the Design for the Environment (DfE) framework to "evaluate phthalates and potential alternatives based on a range of human health and environmental endpoints, and provide this information to stakeholders for informed decision making."

Participants in the kickoff meeting included a variety of stakeholders ranging from manufacturers, state and local regulatory agencies, trade associations, international regulatory bodies, and NGOs. Individual manufactures and users of phthalates present included ExxonMobil, BASF, IBM, Dow Chemical, and others.  It is expected that future activities will include development of a list of existing potential alternatives and an evaluation of the potential environmental and human health effects of those alternatives that seem most viable.  The next meeting of the partnership initiative is will be in October 2001, with early spring 2013 planned for a final report on the project.

An action plan on which this DfE initiative is based was released in December of 2009.  The phthalates identified in the action plan for assessment are:
*each are a mixture of two phthalates

The partnership participants will decide on which substances offer the potential as alternatives.  Collaboration with ongoing reviews by the US Consumer Product Safety Commission (due to use of phthalates in children's toys and baby bottles) and the Green Chemistry in Commerce Council will also be part of the review process.

More information the Design for the Environment Program can be found here.

Posted by The Dake Page at 1:21 PM No comments: Links to this post 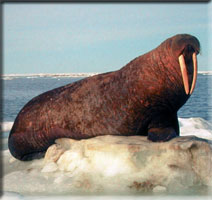 I have previously noted reports of large walrus haulouts onto land due to the lack of Arctic sea ice, and now there are additional reports.  You can read more about it in this summary here.  The original report came from this source here.

More information on radio-tracking of walrus populations can be found on the US Geological Survey Alaska Science Center page.

A short 2-page FAQ on the science behind the walrus haulouts can be seen here.
Posted by The Dake Page at 3:14 PM No comments: Links to this post

The European Chemicals Agency (ECHA) has now developed some "practical examples of how to generate exposure scenarios (ESs) for risk characterization under the REACH chemical substance regulation.  The ESs were developed in collaboration with industry groups in the cleaning products and construction chemicals industries.


The new example exposure scenarios are featured in two publications that are now available on the ECHA website. These are useful for both registrants and downstream users receiving extended safety data sheets (SDSs) for registered REACH substances.  The publications provide descriptions of both professional and consumer use of the substances. One document presents an example ES that refers to the widespread use of a substance in floor coatings applied by workers. The other document contains an example ES on the use of cleaning products by consumers. In both example ESs, the substances are classified as hazardous to human health but with a relatively low hazard level.

ECHA also notes that each publication includes:
More information and links to the example ESs can be found here.
Posted by The Dake Page at 8:52 AM No comments: Links to this post

ECHA, the European Chemicals Agency based in Helsinki, has proposed a list of 20 chemical substances for eventual banning under the EU REACH program.  The August 29, 2011 proposal would label these chemicals as "substances of very high concern" (SVHC), which would make them eligible for placement on the "candidate list."  Once on the candidate list the substances may then be placed on Annex XIV of REACH, which requires manufacturers to apply for authorization for continued use.  Any authorization would be limited to specific uses that can control for the hazardous properties of each substance, and authorization is for a limited time period - just long enough for companies to find substitutes.

Nineteen of the 20 substances are proposed because of their "potentially serious effects on human health." These are classified as carcinogenic and/or toxic for reproduction.  One substance is proposed to be identified as a "substance of equivalent concern...because of its endocrine disrupting properties and potential for serious effects to the environment."

The substances are listed in the table of the ECHA press release here.

Interested parties have until October 13, 2011 to comment on any of the proposed SVHCs. ECHA notes that comments "should focus primarily on the hazardous properties that qualify the chemicals as SVHCs and on the substance identity."  They also ask for "further information on the uses, exposures and availability of safer alternative substances or techniques."

Unless dropped from the list based on comments received, these 20 will join the 53 substances already on the Candidate List. Some of these have already been added to Annex XIV.

More information on the REACH authorization process can be found on ECHA's web site.

Posted by The Dake Page at 8:25 AM No comments: Links to this post