Obama Signs Chemical Safety into Law - This is how Bipartisan Works

President Obama on June 22, 2016 signed into law the Frank R. Lautenberg Chemical Safety for the 21st Century law into force. It's been a long time coming, but it reflects the kind of action that can be accomplished when both parties focus on the reaching the goal rather than thwarting each other. Yes, the bill was bipartisan. 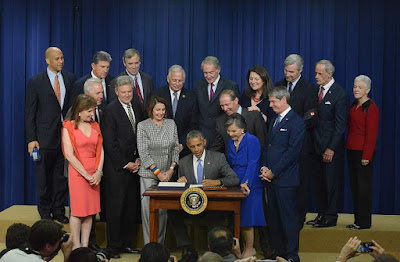 Let me emphasize that. The bill was bipartisan. And not bipartisan in the sense that one party rammed it through and got one or two members of the other party to sign on to it (which is how most "bipartisan" bills are passed). This was truly bipartisan. After both houses of Congress passed their own bills, and after the committee set up to do so reached agreement on a combined bill, the final bill was passed. And not just passed.

Even the name of the law shows bipartisanship: the Frank R. Lautenberg Chemical Safety for the 21st Century. Frank Lautenberg was a Democratic Senator from New Jersey who first introduced a bill to update the Toxic Substances Control Act (TSCA, pronounced TOSCA) in 2005. Lautenberg introduced bill after bill during the next 10 years in an effort to update TSCA, a law passed in 1976 and horrendously inadequate for protecting the public from chemicals. Every Lautenberg bill died in committee without a vote. Literally in the final months of his life, Lautenberg agreed to lend his name to a compromise bill industry helped write for David Vitter, the Republican Senator from Louisiana to introduce. After Lautenberg's death, Tom Udall, Democratic Senator from New Mexico, stepped in to work with Vitter, the chemicals industry, the health and environmental advocacy representatives, the states, the EPA, and dozens of other stakeholders to fine tune the bill into the version signed into law by President Obama.

Yes, the bill is very much industry friendly and nothing like the original bills Lautenberg introduced (which more resembled Europe's REACH law and had zero chance of passing in the United States). And no, the new law won't instantly make Americans any safer. But it does provide a way for EPA to assess the over 62,000 chemicals that were grandfathered onto the TSCA Inventory back in the 1970s without any health and safety assessment at all, and for which the EPA had very limited ability to evaluate. The new law also creates a new way of assessing new chemicals, one that requires a "yes" or "no" conclusion on every chemical (the old system allowed chemicals to default to "yes" if EPA hadn't explicitly said "no" within 90 days. And there are more benefits.

For those not aware of what the new law or the old TSCA does, you can read everything you need to know here. You can read President Obama's comments at the signing here, or watch the whole thing on C-SPAN here.

As the President noted in his remarks:

The Frank R. Lautenberg Chemical Safety Act for the 21st Century will make it easier for the EPA to review chemicals already on the market, as well as the new chemicals our scientists and our businesses design.  It will do away with an outdated bureaucratic formula to evaluate safety, and instead focus solely on the risks to our health.  And it will finally grant our scientists and our public servants at the EPA the funding they need to get the job done and keep us safe.


There is a lot more that needs to be done, mostly by the EPA to come up with the regulations to implement the law, but it shows what can be accomplished when both parties work for the people that elected them and not for their party gains itself. It took a dozen years and a lot of hard work.

Let me emphasize that last part. It took a dozen years. And it took a lot of hard work. A lot of that hard work was done by lobbyists. Yes, lobbyists. This page hasn't been shy about standing up to lobbyists who abuse their power by dishonestly attacking scientists or the EPA or politicians. But lobbying is not always evil (perhaps, at least in some cases, it is a necessary evil).

This law came about not just because of the work of lawmakers and their staffs (who worked very hard), but also because of the hard work of people outside of government who lobbied those lawmakers and staffs. The American Chemistry Council, led by Cal Dooley (a former Congressman himself), was the primary advocate for chemical companies, though there were many other chemical lobbyists who contributed. The Environmental Defense Fund, led by Richard Denison, advocated tirelessly for human and environmental health provisions to protect the public. Again, many other environmental and health advocacy groups lobbied on the public's behalf. The end result is not perfect, and not everyone is perfectly happy with it, but it provides a much better system for evaluating chemicals - new and old - that should in the long run be better at protecting the health and safety of the public.

Finally, this new law is a reminder to the public that our elected representatives can actually do their jobs when they want to. As the President noted:

You don’t get all these people in the same room without a few late nights on Capitol Hill.  I know there were times when folks questioned whether or not all the parties involved would be able to reach this agreement....But that’s what public service is about –- pushing through disagreements, forging compromise, especially when it’s hard, and especially when it’s about something as important as the health and safety of our kids and our families.


It's up to us, the public, to pay attention, learn the facts, and press our elected officials to act. They won't do it without us pressing them to do it. That's true for chemical safety, rational gun laws, climate change, and every other issue that affects our every day lives. For Congress to act, we, the people, must act.

Posted by The Dake Page at 11:04 AM No comments: Links to this post