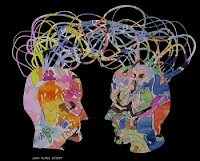 Man-made climate change is real. So how do we encourage people to do something about it? One new paper suggests people are more willing to donate money toward action when thinking about the problem in collective terms. And yet, one wonders if this is really true. Worse, does it even matter?

The study was conducted by Nick Obradovich and Scott Guenther, researchers from the University of California, San Diego, and published this week in the journal Climatic Change. Both political scientists (not climate scientists), their focus was on, as their title suggests, how "Collective responsibility amplifies mitigation behaviors." In short, they found that people were more likely to donate more money to environmental causes when they thought about the problem in collective terms rather than when the appeal was to personal responsibility.

I won't go into the details of the study because others have done that already. There is a great discussion of the study on the blog ClimateProgress. I encourage you to read it, and if you have access to the journal Climatic Change (it's behind a subscription firewall), please read the original paper.

I also am not going to question the veracity of the methods or conclusions of the paper; that I'll leave to others. The goal of my piece is to wonder how much the study even matters.

To begin with, the study group consisted of Audubon Society members, who, not surprisingly, are more likely to acknowledge the reality of man-made climate change and be willing to do something about it. They were also "giving" money that had been handed to them, so weren't even donating out of their own pocket. Nothing wrong with these experimental methods for the purposes of the study, but they don't reflect the realities of where climate action is needed.

Okay, maybe. The study does say that framing the problem in collective terms may be more effective than framing it in personal responsibility terms, so maybe if we somehow focus on how we can all play a collective role in changing our behaviors we might be more successful with climate deniers than finger-pointing. At least in general terms this is consistent with the views of a well-known climate communication expert with whom I recently had a conversation. He felt that finger-pointing merely triggered human defense mechanisms: telling someone they personally have to change (or are wrong) causes them to dig trenches and protect their position, reality be damned.

The problem is, how exactly do we frame the need for climate change action in collective terms that is different from how we're doing it now? It's not like the only message out there is "It's your fault, you must take personal responsibility to fix it." Sure, there is an element of that but mostly it's a matter of we, the United States and the world, collectively, need to, and actually do, take action to reduce carbon emissions and shift to more renewable energy resources. We, the United States and the world, just signed a major commitment with the Paris climate agreement. We are already taking action.

So the problem isn't that we aren't already acting collectively, it's that we could be acting much faster and more definitively if there wasn't an organized denial of the science that, collectively, encourages us to act.

As this page has noted often, there are lobbying groups whose purpose on Earth is to block policy actions that might bring the costs of doing business back onto the corporations who profit from pushing those costs onto society, i.e., us, the collective taxpayers. Collectively we all pay for what fossil fuel combustion is doing to our climate (we also pay for vast amounts of other corporate pollution that is "externalized" from the "free market" system). These professional lobbyists know that their corporate sponsors are causing the climate to warm and don't care; their job is to protect corporate profits and pay various lobbying organizations and their front groups to use any means necessary to block regulatory action.

Action is also held back by amateur deniers who refuse any information that conflicts with their ideological, political, or egotistical pre-conceptions. These folks include both those generally ignorant of the facts and those who are just straight out intellectually dishonest. The latter deniers tend not only to rely on lobbyist and political sources for their "science," they also actively choose to be dishonest in their interactions with anyone who challenges their mental insecurities.

Where all this gets us is to the realization that in communicating science to the public, and getting the public to act - collectively and/or personally - isn't a once-size-fits-all solution. Different methods of communicating with the public will be needed. As the study discussed above suggests, framing in collective terms may be successful with those who are already environmentally sensitive, and, perhaps to a lesser extent, with some groups of more antagonist citizens. Such framing may be a waste of time on lobbyists and individuals whose professional jobs require them to ignore reality in favor of profits, or with amateur deniers whose intellectual insecurities cause them to engage in patently dishonest behaviors.

On the other hand, those citizens who have merely been misled by professional and amateur denier networks will likely be quicker to shift to action once they perceive their self-selected "group" is ready to take action.

And that is where science communicators and advocates for action need to focus their attention.

Read more at: http://phys.org/news/2016-05-climate-people.html#jCp
the study finds that people are willing to donate up to 50 percent more cash to the cause when thinking about the problem in collective terms.