So is it "Global Warming" or "Climate Change?"


One of the things that seems to cause a lot of confusion is the use - and misuse - of the terms "global warming" and "climate change." Frankly, people misuse words all the time and this one example shouldn't be that big of a deal. Mostly the confusion is caused not by the words themselves but by the lack of understanding of the concept of climate change, both from normal ignorance (not everyone can be a climate scientist) and from intentional abuse in order to avoid policy discussions to deal with the science. In either case, it doesn't change the science to say global warming when you should be saying climate change. Still, the jargon used by various professions tends to be confusing to those outside the profession.

So this article begins a series in which basic climate science will be explained for those who want to know but don't have a background in climate science. Feel free to refer to them when talking with your friends, family, or deniers on Facebook and other social networking sites. First up, some definitions so we all know what we're talking about. I'll start with the obvious ones and I'll update as questions arise during subsequent commenting and posting.

"Global Warming" and "Climate Change": As I said, for most people it doesn't matter which you use, but in practice the terms have specific meanings. Remember your high school SAT questions? Well this is more or less like "orange is to fruit" as "global warming is to climate change." An orange is just one of the many kinds of fruit (in technical terms, a "subset"). Global warming is just one component of the many things happening that tell us there is a changing climate (e.g., ocean acidification, melting ice sheets, altered migration patterns). Of course, it's not really that simple, as we will see in subsequent posts, but it's a good start.

"Anthropogenic": Simply put, "man-made." That doesn't mean there aren't natural forces out there also at play; natural forces have impacted climate for millennia. So when scientists say anthropogenic or man-made or human activity they are referring to that component of global warming (or climate change) that is attributable to the things we do - most notably the emission of carbon dioxide (CO2) and other greenhouse gases into the atmosphere. And over 100 years of data tells that what 7 billion humans do make a significant difference to our climate.

"Theory": This is another word that causes great confusion because the general public uses it to mean something completely different than do scientists. To most people, in common usage a "theory" is like "well, yeah, he could win the game in theory." In other words, most people use "theory" when they mean more or less a wild guess, or at best an educated guess. That's not what it means in scientific circles. When a scientist says "theory" he means it is an unequivocal conclusion based on the preponderance (i.e., vast majority) of the evidence. It is built on the forming of hypotheses (proposed explanations for something we observe and measure), the testing and refining of those hypotheses, and then eventually a pretty solid case for what causes what. Hypotheses stay hypotheses as data are collected and analyzed until every attempt to find some other explanation proves futile. Once the evidence is so overwhelming that all other explanations are ruled out it becomes a "theory." In short, things that are unequivocally demonstrated are called theories. Most people wouldn't be too worried about the meaning of "the theory of gravity.;" gravity keeps us from floating off the planet. The same holds true for "the theory of anthropogenic (man-made) climate change." The data are unequivocal; we are warming our climate.

"Scientific Consensus": Another common point of confusion is when scientists say that there is a scientific consensus. In the case of climate change, there is an overwhelming scientific consensus that climate change is happening and it is being caused by human activity. When most people hear this they think of a bunch of people sitting around a table discussing where to go for lunch. "Aha, we've reached a consensus, it's definitely Taco Bell!!" In other words, many people think it's like taking a vote. But that is not what scientific consensus means at all. When a scientist says there is a consensus that means that the issue has been studied for a long time and in many different ways and the sum total of all the collected data from multiple lines of evidence and all of the analysis done by multiple people has eventually built up the evidence to a point where it leads so overwhelmingly to a particular conclusion that the vast majority of scientists agree that what the data tell them is true. That sentence may be a mouthful, but basically it means the conclusion is overwhelmingly, and unequivocally, demonstrated by the evidence. This is the case for man-made climate change.

"Uncertainty": Scientists are always looking at "uncertainty." In every published scientific paper there is a section in which the uncertainties are discussed. In most cases, those uncertainties are quantified statistically to the point of something like "I'm 95% certain the result is this..." This causes confusion to the general public because to most people uncertainty means "we aren't sure." That is not what it means in scientific studies. As science is always collecting and incorporating new data, nothing can ever be said to be 100% "certain." But that doesn't mean we aren't sure. It just means we aren't sure about some particular details. For example, we can be very sure that gravity exists, but there is uncertainty as to exactly how and why it exists. Think about what you would do if the weatherman said there was a 95% chance of rain. That means there is still 5% uncertainty, but I'm betting nearly everyone will have their umbrella handy.

Here are some other terms that have different meanings to the public and scientists (meme from internet, original source uncertain): 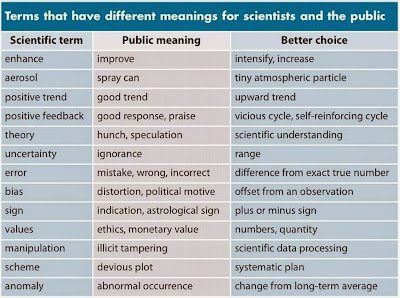 In addition, the USEPA has compiled a list of useful climate change terms that could come in handy.

Okay, that's all for now. Any other terms that people think need to be defined? If so, put them in the comments and I'll add them to the list.
Posted by The Dake Page at 10:01 AM No comments: