President Obama Went to Alaska; Here's Why That is Important to Climate Change Communication 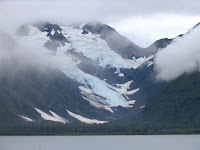 It's been a big week in climate change, in more ways than one. This is especially true for President Obama. First he went to New Orleans, and then he spent several days in Alaska. That's a big deal for climate communication.

The New Orleans visit was on the occasion of the 10th anniversary of Hurricane Katrina. Ostensibly the focus of the trip was to show the federal government hasn't forgotten about those who are still struggling to recover. Despite Republican Governor Bobby Jindal's request that Obama not mention climate change, he did. And it was appropriate to do given that much of New Orleans still lies below sea level...and sea level is rising. Which means the next Katrina could be even worse.

But it's the Alaska visit that is most critical. Using a variety of modern media methods to reach out to the populace - Twitter, a "survival" television show appearance, Instagram, and video blogs, the President highlighted the importance of places like Alaska in climate change effects, and why solutions are needed.

He even talked about gigatons!

Science writer Chris Mooney wrote a nice column in the Washington Post about why Obama explaining gigatons is such a big deal. I recommend you read Mooney's fine article here. Most people probably still won't get the whole "science speak" stuff, but they might be able to visualize the idea of blocks of ice the size of the National Mall from the Capitol Building all the way to the Lincoln Memorial and four times as tall as the Washington Monument - then multiply that volume 75 times.

Now picture all that melting every year just from Alaskan glaciers. Add in melting ice from glaciers all over the world, plus Greenland and other northern land masses, plus Antarctica, plus, well, you get the idea.

If not, watch the video.

Here's the bottom line. Human activity is making our global climate warmer. That warming is significant. This year, 2015, is on track to be the hottest year on record, passing the last hottest year, which was 2014. And with a strengthening El Nino system in the Pacific, 2016 might even pass 2015. Action is necessary to reduce (and preferably reverse) emissions of carbon dioxide (CO2) into the system. These are the facts.

Our decision point is not whether it is happening. It's happening. Our decision point is what do we do about it. The President has taken several steps and is leading the world into making substantive goals for CO2 reduction. Over the last year Obama has brought China, the other major emitter, into an agreement to deal with man-made climate change. Other agreements and goal-setting have been accomplished with other major contributors in the lead up to the big meeting in Paris at the end of this year.

This activity, and his trip to Alaska to highlight the need for action, is in stark contrast to the Republican-led Congress and the Republican candidates for president, all of whom are denying the science and choosing inaction.

By raising the visibility of man-made climate change, the President is speaking directly with to the public. An informed public can then ask their Governors, Senators, and Representatives what they are doing to deal with the unequivocal science. Denial isn't sufficient; the science doesn't go away because they ignore it. The effects seen already, and those sure to come, are real and impact the very constituents who send the most climate deniers to Congress. Yes, the people of Texas, Louisiana, and the midwest - all denier states - receive the most federal disaster aid yet deny the science on which the need for that aid is based. The constituents of Oklahoma, Florida, Louisiana, Missouri, and all the rest deserve to be represented by their elected officials, not pawns in a game in which those officials sacrifice the present and future for donations to their campaigns.

A more complete visualization of a gigaton and the ramifications of man-made climate change can be found on this expansion of Mooney's piece in the Washington Post.

For more on the President's Alaskan trip, check out this blog by Obama's chief science adviser, John Holdren.

For a good primer on man-made climate change, check out this series of helpful pages by the NASA climate research team.

One last point to make regarding President Obama's trip. Fossil fuel lobbyists, their front groups, and their network of media in collusion are unsurprisingly negative in their attacks on the President. Environmental groups and like-minded individuals are generally supportive, but even they have criticized the President for apparent contradictions (or hypocrisy) in going to Alaska to talk about climate change (plus all his other actions) while also signing off on oil leases in the Arctic for Shell Oil. I'll go into this in more detail in following weeks, but for now watch Obama's video, in particular about halfway through where he addresses his rationale regarding the leases.

To recap, President Obama has been doing two things in recent weeks and months that all of us should appreciate in terms of communicating climate science. One is that he is taking direct action where he can with his limited Executive Branch powers. This is absolutely necessary given Congresses inability and unwillingness to pass anything of substance. The second is that Obama is talking directly to the public about both the science and the need for action.

And that is a very good thing for all of us.

Posted by The Dake Page at 8:00 AM No comments: