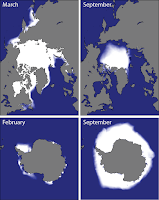 Arctic sea ice is melting. This is one of the most common points made whenever climate change is discussed (in addition to the obvious point that the climate is heating up). But Antarctic sea ice is growing, so it's a wash, right?

This time of year climate scientists (and the informed public) spend a lot of time tracking the annual melting of sea ice in the Arctic. Climate deniers counter by exclaiming: "but the ice is growing in Antarctica." Deniers cry that the overall global sea ice total is the most important number and that Antarctica makes up for the ice lost in the Arctic.

Again. Emphatically. No. No. No.

This idea is akin to saying that a person making a billion dollars a year and a person making minimum wage (about $15,000/year) are equitable because the average income between the two is over $500 million.

In other words, it's silly.

The fact is that the Arctic and Antarctic are completely different systems and not directly comparable in any way. To help people understand the difference between the two poles, let's take a look at the main processes of both.


The most obvious difference is that the Arctic is an ocean surrounded by land and the Antarctic is continental land surrounded by ocean. This difference has a profound affect on how and when ice is formed, not to mention what happens when it melts.

Every summer sea ice shrinks in the Arctic, and every winter it grows. To track these patterns we rely on several measurements, one of which is sea ice extent (others are ice volume and ice age). Sea ice extent is defined as an area of ocean covered by at least 15% sea ice.* Two key numbers are the maximum ice extent (the greatest ice extent of any given year, usually in February) and the minimum ice extent (the least ice extent of any given year, usually in September). Generally the melting in the summer is not complete, that is, there is still sea ice even at the minimum. This, however, could change as various feedback effects tend to increase melting (e.g,. more open water means more warming, which means faster and greater melting). It is expected that at some point we'll see an ice free Arctic for some period of time during the summer. For a variety of reasons, that's not a good thing at all.

Both the minimum and maximum indicators have been showing an overall decrease in sea ice extent in the Arctic. For example, the following chart shows ice extent for March 1979-2016. As can be seen, some years are worse than others, but the general trend is clearly loss of ice over time. The same pattern applies to every single month. Feel free to look at other examples on the National Snow & Ice Data Center website. 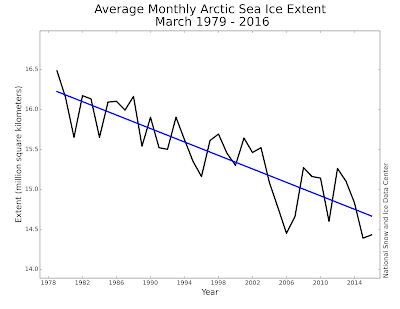 Because of short-term variations in weather, the year to year values vary, but the trend is clear - the Arctic is losing ice. [See here for a video explanation of trend and variation] By the way, when deniers claim "Arctic ice has recovered," they are falsely cherry picking one of those little peaks and dishonestly ignoring the clear overall trend to fabricate their entirely - and obviously - false conclusions. [This intentional deception is why we know that deniers are being dishonest, not merely ignorant]

While the Arctic is frozen ocean, the Antarctic is frozen land. While the sea ice in the Arctic grows out into the ocean and is constrained by the land, the sea ice in the Antarctic grows out from the land, basically surrounding the continent and expanding without much resistance as far as the cold water and winds can take it. Remember that sea ice extent is defined as "at least 15% coverage of a unit area," so it doesn't necessarily mean the entire area is covered with ice, but with that much unhindered space to grow, it can go a long way.


One important factor is that greater melting of land-based glaciers and ice sheets has put more freshwater into the ocean surrounding Antarctica. Since the water is so cold, and because the freshwater tends to float on top of the denser saltwater of the ocean, you see rapid freezing of this new surface water. Another factor is the wind. Unlike the land-constrained Arctic, the winds have virtually limitless ability to push any forming sea ice floes further out to sea, where the cold temperatures tend to fill in the spaces and increase sea ice extent. Studies have also shown greater and faster movement of Antarctic glaciers toward the coasts, which helps push more ice offshore. In addition, the west Antarctic ice shelf** has been collapsing, and will continue to do so irreversibly. 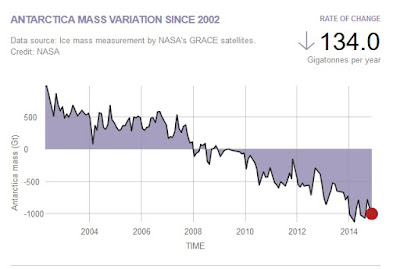 The graphic above comes from NASA's GRACE satellite. It shows that despite the annual winter increase (and annual summer loss) of sea ice in the Antarctic, the overall ice mass of the continent itself has been dropping. Ice mass on Greenland shows the same pattern, only worse.

All of this information tells us that while we may see short-term increases in the Antarctic annual sea ice extent, continued warming of the climate will inevitably result in a much rapider overall ice loss as the glaciers continue to move to the coast and the west Antarctic ice shelves disappear.

So we can see that the two poles are completely different in every aspect, which makes any adding of their ice masses meaningless. All the factors in the Arctic point to continued and rapid ice losses by every measurement (sea ice extent, ice mass, ice age, ice thickness, ice volume). The increased open water results in even faster warming and melting, with these effects getting worse as additional feedback mechanisms kick in. Antarctica is showing a very different pattern but one no less of concern. Sure, the sea ice extent is increasing, but the reasons for it all point to major long term problems in Antarctica that will eventually have global ramifications even coming from such a remote continent. Continued overall ice loss from the land will contribute, along with ice melting on Greenland, to rapid sea level rise. Some recent studies have suggested that we could reach a  threshold that would cause a catastrophic melting of the two ice sheets, thus resulting in huge increases in sea level in a matter of decades rather than centuries. That may not happen, but then again, it might.

As mentioned earlier, climate deniers like to talk about the Antarctic whenever the discussion is about the Arctic (especially given it is the winter growth period in the south while we're watching the summer melting in the north). But adding the two together to get some sort of "total sea ice" value is both meaningless and dishonest. The two areas work independently, both in how they are impacted by man-made climate change and how they contribute to it.

By no honest analysis can anyone say the trends are good.

*The 15% threshold is a bit confusing because it doesn't mean the entire area is covered with ice or that any given area is exactly 15% - the area could have anywhere from 15% to 100% sea ice. Obviously, an area that is 100% packed with ice would have more ice than an area only 15% covered by ice, yet they would both be counted as being the same sea ice extent. This is why we also look at ice volume, ice age, and thickness.

** Ice shelves are floating ice still connected to the land. Sea ice is that which has broken off and is floating. Ice sheets are the massive layers of ice that cover huge areas of land - Greenland and Antarctica carry the two remaining large ice sheets. Glaciers can be thought of as mini ice sheets flowing down mountains.

FYI, Tim Ball is a paid lobbyist for the fossil fuel industry. He is best known for misrepresenting his credentials and denying basic science. He fronts a fossil fuel group deceptively called "Friends of Science." Ball is also one of Heartland Institute's "experts," i.e., disinformers. His views are routinely debunked.

Anyone interested in learning more about the lobbyist Tim Ball can check out:

Dake doesn't like dissension. Dake likes ad hominem attacks. Dake has nothing of substance to say. The world is fine. Life is good. Enjoy it!

False, S. Lawrence Parrish. This page welcomes honest discussion. What it doesn't like is blatant dishonesty and spammers. "Martha Ball" has been spamming multitudinous blogs and Facebook pages she finds in Google searches, without bothering to read any of them. She posts the same cut-and-paste of Tim Ball's latest lobbyist-funded anti-science propaganda.

Tim Ball is a long time lobbyist of the fossil fuel industry. He has had a track record of blatantly and repeatedly lying about his credentials and has zero climate science research background. Virtually everything he says is regurgitated lobbyist talking points that have been debunked thousands of times already.

For the record, "S. Lawrence Parrish" is a Facebook troll who has harassed posters and commenters on Facebook, and now on this blog. He too should refrain from furhter spamming.

Anyone who disagrees with Dake is a "troll".

Well put dake. .this is how knowledgeable and rational people understand the effects of climate change . Thank you. Keep it up

Well put dake. .this is how knowledgeable and rational people understand the effects of climate change . Thank you. Keep it up

Sorry, "Anonymous," but one study doesn't make the science. The sum total of all studies suggests that Antarctica is overall losing ice mass. As was said in the article above:

"The graphic above comes from NASA's GRACE satellite. It shows that despite the annual winter increase (and annual summer loss) of sea ice in the Antarctic, the overall ice mass of the continent itself has been dropping."

The graph provided in the article above clearly demonstrates this trend. You don't get to ignore all the data because one study says what you want it to say.

Since you like Zwally, you should know that he states any ice gain from his one study is likely temporary and that while ice melt from Greenland is currently outpacing Antarctica in contributing to sea level rise, it may only take "a few decades for the ice melt in Antarctica to outweigh the ice gains." In other words, even if Zwally is right about Antarctica, we're still going to be swamped by Greenland's ice loss, with ice loss from Antarctica catching up and dwarfing even that. Kind of sucks, especially if you live in Florida or the coasts (where most people in the world tend to live).

Sorry that you can't ignore the history of data you find inconvenient and simply cherry pick the one study you find more to your liking. Perhaps that is why you chose to remain "Anonymous" and didn't bother to link to any support for your opinion.