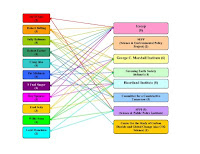 Not long ago I wrote an article demonstrating that the most cited climate skeptic scientists were all associated with free market lobbying groups. I compiled a chart that showed these connections, including color coding so that the mash-pit of lines between the boxes could be discerned. The summary of that article, sans comments, can be read here, and is good for those who don't want to wait the 10-20 seconds it takes for the original article to load, complete with its 647 comments when I shut it down because it was too slow (which, of course, is why the denialists tried to saturate it with repetitive comments).

Apparently the local denialists felt a little threatened by the verifiably accurate chart showing connections between these skeptics and the free market lobbying organizations, because there has been a mad scramble to find new names that don't show up on the list (despite the list being the names they most often cited). One such denialist is now touting a Dr. David Evans (not to be confused with Gather's own David Evans, who is an actual marine scientist).

Unfortunately, the copy-and-paster denialists don't seem to worry too much about credibility, and have said as much.

So, how does Dr. David Evans fit into the chart?

First off, Dr. David Evans is a bit of a fraud. He claims to be a "rocket scientist" in an effort to manufacture credibility, which takes a nose dive when he was exposed for what he really is, a PhD in Electrical Engineering who has never published one peer-reviewed paper in climate science, rocket science, or any science. [Other aspects of his posted resume also lack credibility, but we'll stick just to those that are relevant for climate science.] His climate change "credentials" include some blog articles on climate change, which have been debunked widely. He "produced" (meaning he wrote the line code) for carbon counting software used by the Australian government.

And gee, he even has a company called Science Speak with Joanna Nova, the performance speaker who wrote the Climate Skeptics comic book so widely used by denialists. Oddly enough, Science Speak bills itself as "a scientific modeling and mathematical research company, and we speak about some science issues." [Notice the phrasing, which is designed to suggest more than it actually says. In reality, the fact that David and Joanna "speak" about science doesn't mean they know about climate science at all. And the "scientific modeling and mathematical research" turns out to be more about "Our investment interests led to goldnerds.com.au, which sells subscriptions to spreadsheets that analyze gold and silver companies listed on the North American and Australian stock exchanges. David wrote "Why Invest in Gold Now?" in 2004, foreshadowing the current financial crisis and explaining why gold is a good investment during such times."

Climate change? Not so much.

Ah, but the chart. Where is David Evans?

Well, mate, that explains why he is associated with The Lavoisier Group, a global warming skeptic organization based in Australia. The group is closely associated with the Australian mining industry, and was founded in 2000 by Ray Evans, then an executive at Western Mining Corporation (no information on whether Dr. David Evans and Ray Evans are related). Like the Heartland Institute in the US, the Lavoisier Group is a free market group that denies the science because "any policy responses, such as signing the Kyoto Protocol, would be too expensive for Australia's industry." [Yep, don't like the possible policy options, so the science just must be wrong, right, mate]

Dr. Evans also has written for the Ludwig von Mises Institute, which is another free market lobbying group that bills itself as "the world center of the Austrian School of economics and libertarian political and social theory." Not much climate science going on there either.

So, why mention Dr. Evans? Well, because in their desperation to cite anyone else besides the usual crew of skeptic scientists who are all associated with free market groups, they have latched on to the Australian version of a free market skeptic. In other words, Dr. Evans has no real expertise (or even experience) studying climate science, but he does have a free market ideology (and a penchant for resume padding).

And despite what denialists claim, credibility matters.
Posted by The Dake Page at 2:31 PM No comments: Links to this post