"Warming of the climate system is unequivocal." "Anthropogenic drivers...are extremely likely to have been the dominant cause of the observed warming since the mid-20th century."

These are the top line conclusions of the most recent IPCC Assessment Report 5, commonly known as AR5. The term "unequivocal" is defined as "leaving no doubt, unambiguous" (i.e., undeniably occurring). The term "extremely likely" is defined as "95-100% probability" of occurrence. Keep in mind that scientific conclusions are generally conservative (i.e., it's probably even worse).

There is a scientific consensus that the climate is warming. It's unequivocal. Humans are the dominant cause. These findings are undeniable.

Contrary to what deniers suggest, scientific consensus isn't some sort of hands-raised vote that goes on in some boardroom; it's the result of more than 100 years of scientific research published in peer-reviewed science journals. The nature of science is to always try to falsify assumptions, so when the data are so overwhelming that no doubt remains as to the overall conclusion, then that conclusion is seen to have reached consensus. Scientists are a skeptical bunch, so when the data demonstrate something this unequivocal it's considered a consensus. There is no denying it.

This scientific consensus has been demonstrated by several papers using a variety of metrics. And now a new paper, Consensus on consensus: A synthesis of consensus estimates on human-caused global warming (PDF), brings together the authors of seven of those earlier papers to demonstrate the scientific robustness of that consensus.

A good summary of the issue is presented by Dana Nuccitelli, a co-author of the paper, in The Guardian. This new study concludes:

1) Depending on exactly how you measure the expert consensus, it’s somewhere between 90% and 100% that agree humans are responsible for climate change, with most of our studies finding 97% consensus among publishing climate scientists.
2) The greater the climate expertise among those surveyed, the higher the consensus on human-caused global warming. 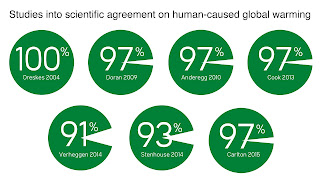 The previous papers all used different methods to assess consensus. This paper shows that despite the method used the results are all similar; the vast majority of climate scientists agree that more than 100 years of peer-reviewed science demonstrates that humans are warming the climate system. The details of the study can be found in the PDF above or online here.

Nuccitelli, and the paper itself, also delves into the work of Richard Tol, an economist associated with the UK policy lobbying firm, Global Warming Policy Foundation. While not a climate scientist, Tol has admitted that the scientific consensus is "indeed correct." This hasn't stopped him from vigorously pursuing his role with the lobbying firm to block policy action, spending substantial amounts of time trying to discredit the consensus he has already acknowledged. The current paper builds on previous critiques of Tol's work, identifies further fatal errors in his analysis, and unequivocally debunks his misrepresentations. Based on previous experience, no one should be surprised that denier attempts to deny the scientific consensus are error-filled (some so egregious it's difficult to accept they weren't intentional) and fail to stand up to scrutiny.

The scientific consensus, on the other hand, has stood up to intense scrutiny. As this new paper documents, no matter what method is used to determine consensus, the results always show something approaching unanimity. Climate change is happening and humans are the dominant cause.

Nuccitelli ends his Guardian article with the following, which seems an appropriate way to end this piece as well:

While the consensus may be an inconvenient truth for those who seek to obstruct and delay the implementation of global warming solutions, it's nevertheless an indisputable reality; one we'd be better off if people learned to accept.