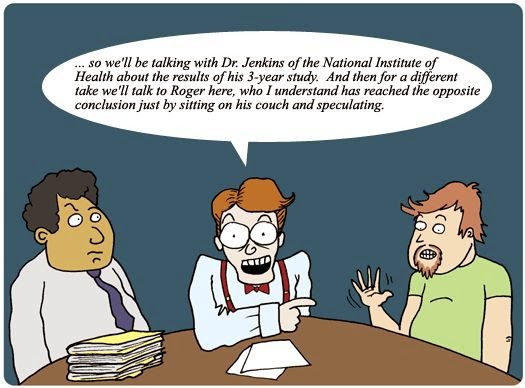 Climate denial remains active despite the overwhelming consensus that human activity is causing the warming of the planet and that action to reduce carbon emissions is immediately necessary. Professional climate denial lobbyists are a big reason for the continued anti-science sentiment, but the media have played a critical role in climate denialism as well.

To begin with, the media have been lax in reporting man-made climate change commensurate with its importance to current and future policy needs. Earlier in 2014 several Senators called for the media to increase climate coverage. Whether media coverage of climate has increased is debatable, especially given the release of so many critical climate change reports this year. But even when the media do report on climate issues they often misinform as much as they inform. This post looks at a few of the reasons why this is so.

In some cases this media role is overt and intentional.Time after time studies have shown that Fox News, to name the best known and most egregious example, intentionally misrepresents the science of climate change and actively foments distrust of scientists while giving false credence to non-scientists. One recently published study demonstrates that partisan media, especially the conservative media, effectively turns the public away from science.

While these ideologically motivated anti-science venues are obvious, at least to impartial observers, in most cases the role of the media in spreading climate denial is more subtle and a function of the differences between how the media works and how science works. This problem is exacerbated by the fact that most media outlets have cut back on professional journalist staff, in particular on dedicated science reporters. Which means people who cover politics – or travel – one day are covering science stories the next. The tendency toward limited science expertise, short deadlines, and an inclination toward “balanced” reporting, sets the media up for both internal and external manipulation by climate denial lobbyists.

In most cases the failure of the media is less about ideological bias and more about the way “journalism” works.  Since most of the denialist industry comes from the realm of political lobbying, the media tend to treat climate science as if it were  some sort of political philosophy. This is in direct conflict with how science itself works, where everyone’s goal is to advance our knowledge and taking that knowledge wherever the data will defensibly take us. This sets up an inherent conflict between the normal incremental movement as scientists do studies to address small aspects of the bigger picture and the tendency for the media to treat each new paper as if it were the science in and of itself. Such reporting often seems to say one thing one day and the opposite the next - an unintentional media glitch that professional denial lobbyists willfully exploit.

Let's take a look at the problem of "balance" in media. Ironically, the desire to provide “balance” in principle can lead to massive imbalance in practice. For example, consider a scenario in which a news anchor wants to discuss the state of climate science. The young producer calls up the National Academy of Sciences and asks for an expert on climate science. Good start, right?

Maybe. Already this interview has the potential for incompletely informing (and possibly misinforming) the public because the news anchor will presume that the expert called will be an expert in every facet of the science. Rarely is that the case. One scientist may be an expert in Arctic ice thermodynamics while another may be an expert in atmospheric physics. Each may be able to discourse for hours on their topic (usually putting the audience to sleep) while possibly not quite getting all of the minute details right on other facets of the science. Any errors or hesitancy to opine on an area outside their specific expertise is painted as ill-informed or hedging. Further, the anchor could ask politically charged questions, which the expert is likely not in a good position to answer (most scientists are not very political). The potential for miscommunication is huge.

But let’s take this a step further.  Themedia, especially the political media, are used to staging debates betweenopposing sides. That may work when you have two parties with different views of how to finance job creation where either view may have merits on its own. But it doesn’t work for discussing the state of the science. Certainly there are dramatic debates between scientists on specific studies, but by the time the totality of the science has reached a point where the vast majority of scientists agrees on its meaning, i.e., a scientific consensus, that is the state-of-the-science.

Unfortunately, the media rarely present this state-of-the-science, usually because the discussion can get too technical and it just is not enough drama for ratings. In order to "turn up the dial" enough to attract viewers the media willoften choose to contrast the science with a denial of the science. Doing so creates a false equivalence that just doesn't exist. Since there is a tendency to give equal time to opposing "views" you have the situation where a non-valid and usually non-factual denial appears to have equal weight with what is the end point of tens of thousands of studies by thousands of scientists all over the world.  To the viewer this comes off as:


“Well, Scientist A says global warming is happening but Scientist B says it isn’t.  It seems like scientists are still divided over this issue, so I can relax and wait until they figure it out.”

See the problem there?  Scientist A is, in fact, a scientist and has either presented a summary of the sum total of all of the science from thousands of scientists or merely offered his insight on one particular area in which he has expertise. On the other hand, “Scientist B” is often not even a scientist at all – he is a political operative hired by a free market lobbying organization to deny the science. The viewing public generally doesn’t understand this; all they see are two people arguing. The very fact that these two guests are being interviewed implies that they have comparable expertise and credibility on the topic being discussed. That is most definitely not the case. So in an effort to provide “balance,” the media actually tips the scales towards the non-scientist lobbyist who really shouldn’t even be part of the discussion.

This is exactly the scenario that the denialist industry strives to achieve. That is their goal – make it look like there is a disagreement where there really is none. The goal is to manufacture doubt in the minds of the people and give their favored politicians cover to deny the science. And the media are complicit in this - sometimes unintentionally but ofttimes intentionally.

Future posts will look closer at the media, including the "semi-accidental" denialism. One thing that the media can do now, however, is to stop referring to climate deniers as "skeptics." As shown before, denialists are not skeptical at all. Skeptics look at evidence and are simply harder to convince. Denialists dishonestly reject all scientific evidence and unskeptically accept any conspiracy blogger or lobbyist misinformation no matter how obviously false it is. It's time to call denialists what they are - science deniers.

Posted by The Dake Page at 11:18 AM No comments: Links to this post