How Not to Run the EPA 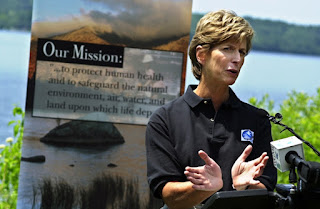 These pages have previously pointed out the dishonesty of Trump's EPA Administrator, Scott Pruitt. For example, see here, here, here, and here. Now a former Republican Administrator of the EPA, has come out against the  actions of Pruitt in a New York Times Op-Ed whose title I have co-opted for this post.

In "How Not to Run the E.P.A.," Christie Todd Whitman states that the actions of Scott Pruitt have "confirmed my fears." Early in her piece she makes this astounding statement:

As a Republican appointed by President George W. Bush to run the agency, I can hardly be written off as part of the liberal resistance to the new administration. But the evidence is abundant of the dangerous political turn of an agency that is supposed to be guided by science.

After pointing out the egregious breach of oath when Scott Pruitt attacked a reporter for accurately reporting the crisis in Texas pollution following Hurricane Harvey, Whitman notes that Pruitt's agency is systematically purging the words "climate change" from EPA's websites, grant approvals, and presentations. Examples of EPA forcing its own scientific and communication professionals to remove "climate change" from presentations have reached epic proportions. Basic science communication of facts has been attacked by Pruitt. The censoring of scientific terms has become absurd, with some presentations now using "C****** C*****" (with the asterisks) or "extreme weather perturbation events" when talking about climate change.

In case you haven't noticed, this is a violation of Scott Pruitt's and the EPA's legal mandate. In other words, what Pruitt is doing is unethical, illegal, and in violation of EPAs own scientific integrity policies. Similar violations of ethics and integrity are being carried out by Trump's other anti-science appointees placed in charge of the nation's scientific agencies.

All of that is bad enough. But Mr. Pruitt recently unveiled a plan that amounts to a slow-rolling catastrophe in the making: the creation of an antagonistic “red team” of dissenting scientists to challenge the conclusions reached by thousands of scientists over decades of research on climate change. It will serve only to confuse the public and sets a deeply troubling precedent for policy-making at the E.P.A.


Indeed, Pruitt has proposed a "red team/blue team" approach to science. This is the ultimate in dishonesty and anti-science. Pruitt has a long history of promoting fossil fuel lobbyist interests - he routinely copied lobbyist talking points into official Oklahoma state positions when he was Attorney General of that state (repeatedly suing the agency he now runs using arguments from lobbyists based on falsehoods; the same lobbyists who funded his campaign coffers and pushed for his appointment as current EPA head). He now continues that attack on EPA's health and safety regulations - which are mandated by laws passed by Congress - from the inside. Again, a clear violation of his and his agency's legal obligations.

Why is the red team/blue team so anti-science? Whitman continues:

As a Republican like Mr. Pruitt, I too embrace the promise of the free market and worry about the perils of overregulation. But decisions must be based on reliable science. The red team begins with his politically preferred conclusion that climate change isn’t a problem, and it will seek evidence to justify that position. That’s the opposite of how science works. True science follows the evidence. The critical tests of peer review and replication ensure that the consensus is sound. Government bases policy on those results. This applies to liberals and conservatives alike.

In essence, Pruitt plans to have people claiming Elvis still lives on equal footing with the entire historical and scientific evidence of Elvis's very real and permanent death. In a word, that's crazy. It's anti-scientific. It's dishonest.

Whitman points out why this is so:

On one side is the overwhelming consensus of thousands of scientists at universities, research centers and the government who publish in peer-reviewed literature, are cited regularly by fellow scientists and are certain that humans are contributing to climate change.

On the other side is a tiny minority of contrarians who publish very little by comparison, are rarely cited in the scientific literature and are often funded by fossil fuel interests, and whose books are published, most often, by special interest groups.


This bears reinforcing. There is 100+ years of published science that overwhelmingly, undeniably, and unequivocally demonstrates human activity is causing the climate to warm, that it is happening now, and that action must be taken. Pruitt contends to ignore this and push the views of fossil fuel lobbyists that have no scientific merit whatsoever.

The science demonstrating climate change stands up to scrutiny. It is unequivocal.

The opposing opinion of fossil fuel interests does not stand up to scrutiny, has no scientific basis, and has already been admitted by Exxon and other companies that they know their views are false.

Whitman ends by stating emphatically that Scott Pruitt and the Trump administration are being dishonest and anti-science. If Pruitt insists on pushing through his dishonest program,

...it should be treated for what it is: a shameful attempt to confuse the public into accepting the false premise that there is no need to regulate fossil fuels.

So what can scientists, the public, and honest people everywhere do about Pruitt and Trump's attack on science?

Within the EPA (and other agencies also under internal attack), one option is to become a whistleblower. One Department of Interior scientist, Joel Clement, has gone public with some of the tactics used by the Trump administration to violate the scientific integrity of its mandate. There are legal protections in place for employees who speak up against being forced by political appointees to violate their ethics.

Outside the EPA and other agencies, watchdog groups can file formal complaints with the office of scientific integrity. Pruitt and others are clearly violating their obligations. The mission of the EPA is clearly stated: "to protect human health and the environment." Yet, Scott Pruitt has done everything in his power to destroy the EPA's ability to "protect human health and the environment." Pruitt's actions and statements have one clear motive - protect fossil fuel and mining interests.

Other public interest groups can file lawsuits against Pruitt and the EPA for violating their legal mandates. Opening up national monuments to mining, fossil fuel extraction, and other destructive development is a violation of the principles and promises of the acts of creation.

As citizens, each and every American can call, email, mail, and visit with our members of Congress, both in the House and Senate. This is our country, and Scott Pruitt, Donald Trump, Rick Perry, and other political appointees charged with protecting our public lands, human health, and environment, cannot be allowed to destroy them instead for their own personal gain.

Posted by The Dake Page at 9:43 AM No comments: Links to this post