As anticipated for many months, 2015 was the hottest year ever recorded. And not just the hottest by a slim margin...this was no "by the nose" win...2015 obliterated the previous record holder. By the way, that was 2014. NASA and NOAA jointly announced their independent findings this week. Here's the trend video:

This is no big surprise. Rising CO2 levels surpassed 400 ppm, a trend that has been taking CO2 about 40% higher than the normal range maintained for thousands of years. With CO2 as a driver, the mean global temperature trend has been staggering upward for many decades. Each decade has been warmer than the one before, and the hottest years are stacking up. The ten hottest years have all been since 1998, with 15 out of the 17 hottest years occurring since 2000. 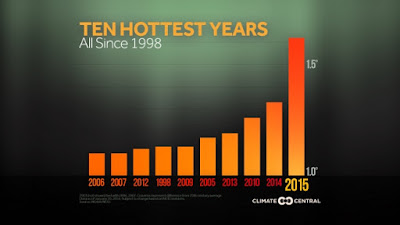 You want a cool graphic? Check out this 15-second video that shows the record years continuing to rise.

In short, human activity is continuing to heat up the climate system.

Why was 2015 such a huge record breaker? Part of it is because of a massive El Nino event. You remember El Nino, right? The last big one was 1998, which not coincidentally is the year that the denier lobbyists cherry pick as their start date when they want to falsely claim "warming stopped" (despite the obvious fact that warming has continued, and more recently, sped up). El Ninos appear sporadically and in El Nino years we can generally expect global temperatures to be higher. La Nina years tend to tamp down increasing temperatures.

Aha! You might say (incorrectly). It's only warmer because El Nino made it warmer. Wrong. It's warmer because CO2 and other greenhouse gases are driving the warming trend in our climate. This year would have continued that trend even without El Nino. What El Nino did do was help 2015 not only break the previous record (of 2014), but smash it. Look again at the far right column in the graph above. Now look at the second from the right column - that's 2014. Normally the new records increase only incrementally over the previous record; after all, the climate is fairly stable and it takes a lot to change it. El Nino helped 1998 make a big jump, and it helped 2015 make a big jump. Based on how this year is starting out, 2016 has a reasonable chance of breaking the record for the third year in a row.

NASA and NOAA are not alone. The Met Office in the UK also reported that 2015 was the warmest year on record. The Japan Meteorological Agency is expected to report the same within the next few days. 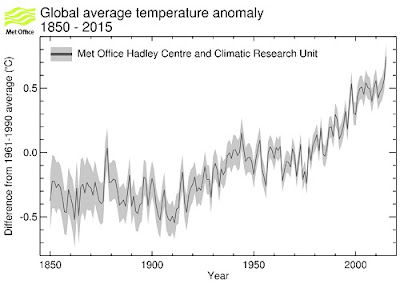 None of this comes as a shock given that the early months of 2015 were already breaking monthly records by such a large margin that it would have taken a worldwide deep freeze for the rest of the year to not break the record. Instead we saw continued monthly record-breaking, which is why 2015 shattered the annual global mean temperature record.

Of course, denier lobbyists and their affiliated blogs have trotted out their usual non-scientists to dismiss the scientific findings with claims of worldwide conspiracies. Mostly the deniers have tried to ignore the inconvenient science and instead have focused on the snowstorm expected to hit one part of the eastern United States, as if it is somehow relevant. In other words, deniers will continue their desperate attempts to keep policy action from happening by intentionally lying about the well-known science.

But as the recent commitments in Paris demonstrate, the world has left the deniers to drown in their own buffoonish dishonesty while the rest of us take responsibility. It's on to 2016.

Posted by The Dake Page at 11:38 AM No comments: Links to this post