Carbon dioxide - the smoking gun of global warming! There, I said it. So far in this series we've established that the greenhouse effect is the normal process that keeps our planet within a reasonable temperature range so that we can live here. Now we'll jump ahead a bit and show why we know that it is CO2 from fossil fuels that is causing the rising global temperatures. This will take several posts so to begin with I'll focus on a series of graphs that will clearly show the relationship between CO2 and temperature.

First, a reminder of what has been happening with temperatures since 1880. In this land-ocean temperature index graph it's pretty clear that average global temperatures have been rising. 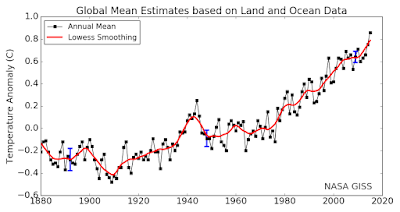 Now, what has been happening with CO2? Well, we have more than 50 years of very high quality continuous data on CO2 taken at the Mauna Loa Observatory in Hawaii. The famous Keeling curve shows that CO2 has been rising steadily during that time. The line line goes up and down because CO2 release is seasonal. This year we passed 400 ppm, a 40% increase over pre-industrial highs. 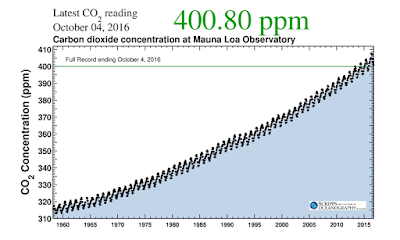 By the way, if you look at the temperature graph and then the Mauna Loa CO2 graph you'll notice that the relationship isn't linear. In other words, while the CO2 has had a fairly steady and even climb, the temperature tends to go up and down in the short-term because there are important short-term events (e.g., El Nino, La Nina, AO, etc.) or other pollutant impacts (e.g., aerosols), not to mention the occasional volcano, that can either enhance or inhibit the effects of CO2. Anyone who suggests that there is an exact one-for-one linear relationship between CO2 concentration and temperature on a short-term basis clearly doesn't understand the science. In any case, even with the short-term "noise" you can still clearly see the longer-term climb in temperatures along with the CO2.

Okay, continuing on, you can also track back and see how CO2 and two other greenhouse gases have increased dramatically in the last century. 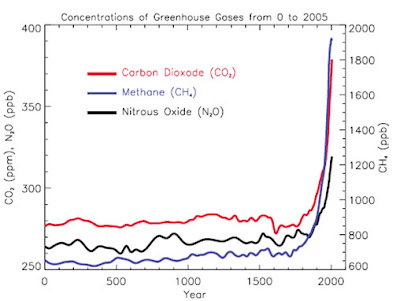 I'll come back and talk about methane and nitrous oxide in future posts, so for now just focus on the carbon dioxide (CO2), the red line in the graph above. So how does the CO2 relate to the temperature. In the graph below you can easily see that temperatures (cool blue to warm red) have increased as CO2 increased (the black line). 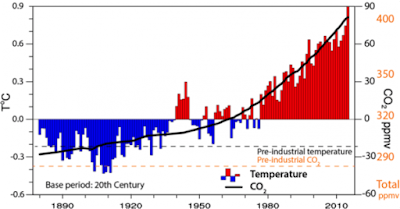 The following graph also shows the correlation between increasing CO2 concentrations in the atmosphere and temperatures. 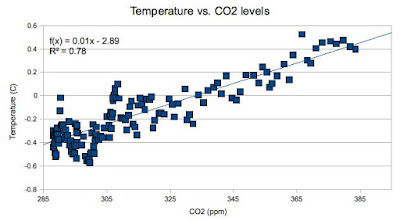 Looking pretty clear, isn't it. And it is pretty clear. As I've discussed in previous posts the dynamics of the greenhouse effect are basic physics, and they were first discovered 200 years ago. Of course, science always will look at new data, and with the incredible growth of technology, use of satellites, ability to measure ice cores and ocean depths, etc., climate scientists from all disciplines have been able to find more and more data, and all of it supports the concept that CO2 is causing an increased warming of the atmosphere.

Okay, this post has hit some of the highlights and tried to show the correlation with graphs. I'll take a closer look at key points in future posts. For now I'll leave you with one more graph. Scientists often get asked how they know it is human activity that is causing the increasing temperatures. The following is just one way we know. Graphs for each part of the world show the same trends. 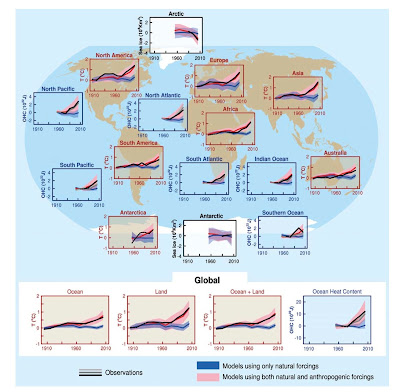 I'll talk more about this later, so for now just look at the black line and the pink and blue bands in each small graph. The black lines are the observed (measured) temperatures in each geographical region going back to the early 1900s. The blue bands show the results of modeling with just the natural forcings, like those things I talked about in earlier posts. The pink bands show the results of modeling when human activity forcings are added to the calculations. Guess what. The modeling thatincludes human activity match pretty well in all regions to the actual observedtemperatures. The modeling that omits the human component, well, not so much.


[This is part of a series of posts explaining the basic science of climate change. More posts will be added weekly.]
Posted by The Dake Page at 8:30 AM No comments: Links to this post