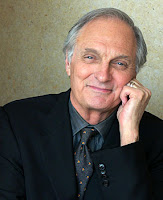 Alda Alda is in the house. He is here to help communicate the science of communicating science.

I arrive a full hour before the lecture and 10 minutes before they open the doors, but the line is already wrapped around the side of the building. Alda is a paragon in the acting business, best known for his roles of Hawkeye Pierce on M*A*S*H and Arnold Vinick on The West Wing. He won an Oscar for his role in The Aviator (a movie about Howard Hughes). But Alda is also a lifelong science geek that found his dream when he hosted Scientific American Frontiers for 11 years. That show taught him how to help scientists communicate better with the public. When it ended, he helped found the Alan Alda Center for Communicating Science at Stony Brook University.

I grab a seat five rows from the front. The auditorium holds 1500 seats, more than three-quarters of which are filled by the time he struts on stage. At 81 years old he looks a little bedraggled at first, but quickly warms up and has the audience laughing and cheering. His long career in acting is put to good use - he becomes a storyteller. And the stories he tells are how to communicate science.

He tells us that the beginnings of this crusade came when he was about 50 years old and laid back in a dentist's chair. Just as the scalpel was about to touch his gums the surgeon says, "There will be some tethering." Wait, what? Alda asks him to explain what tethering is and the reply is a frantically impatient "Tethering! Tethering!" with no further explanation. Two weeks later Alda is posing for a close up on a movie set and the cameraman asks him why he is sneering. It turns out that the dental operation left him with reduced mobility such that his intended smile came off as a sneer. The incident brought home the importance of proper communication from doctor to patient, though Alda admits the artifact now lets him play villains more credibly. The ensuing laughter sets the story in our minds.

His long experience interviewing scientists helped him understand what communication works...and what doesn't. Most scientists talk over the heads of their non-science audiences, making the science inaccessible. Throughout his lecture Alda offered tips on how to communicate better. He also conducted practical examples of the kind of training he and his Stony Brook colleagues teach at the Center for Communicating Science.

Much of that training relies on what actors and comedians call improvisation, or Improv. Simple exercises like "mirroring" help build empathy and relating of the scientist to the non-scientist. The communicator is responsible for guiding the other person to make sure they are following. Paying more attention to how and whether the other person is understanding you allows you to see where you are losing them and change tack. Improv helps scientists learn how to reach people, to learn empathy. The concept of empathy is intriguing. Practicing paying attention leads to better reading of the emotions the person is feeling, which he says is a tremendous tool for communication.

If you can't attend Improv training, he suggests reading literary novels that delve into the thoughts and emotions of the characters. Or watch a movie with the sound turned down and try to figure out the emotions of the actors. He likes watching Scandinavian movies since he doesn't know the language. Another option is try to figure out the emotions of people you meet during the day, something you do every time you go to Starbucks or buy groceries. Paying attention heightens your awareness, which can make you a better communicator.

He also warns about overuse of jargon, something I've talked about before on these pages. Scientists must fight the "curse of knowledge," where they understand their field of work so well they forget that others don't know these things. This holds true for the general public as well as other scientists in different fields.

In another exercise he had a volunteer from the audience tap out the tune of a well-known song. Because the tapper could run the tune in his head while tapping he assumed everyone would recognize the song, but only a few hands went up. [The song was the national anthem] This emphasized the importance of story, or in the tappers case, melody. People need the context, the story along with the facts. Tell a story. Provide the melody that gives the notes context.

Alda made many other points in his hour presentation and the Q&A period that followed. The time was filled with laughs (humor is another communicating tool) and applause. There clearly was a tremendous amount of respect for him in the room, both as an actor and in appreciation for what he is doing to improve scientific communication. He received a well-deserved standing ovation at the conclusion, and the chatter exiting the room was electric as each of us anticipated putting his tips into practice.

Posted by The Dake Page at 9:58 AM 2 comments: Links to this post