New book attacks the chemical industry as "The Polluters" 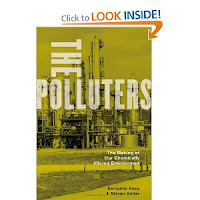 A new book by Benjamin Ross and Steven Amter apparently pulls no punches in attacking the chemical industry for lobbying to inhibit regulations of toxic substances.  I have not read this book, so for more information please see the Washington Post book review by Seth Shulman.  The title is "The Polluters: The Making of Our Chemically Altered Environment" and is available at Amazon.com.

Based on the review, it appears to be reminiscent of two other recent books, "Doubt is Their Product: How Industry's Assault on Science Threatens your Health" (by David Michaels), and "Merchants of Doubt: How a Handful of Scientists Obscured the Truth on Issues from Tobacco Smoke to Global Warming" by Naomi Oreskes and Erik M. Conway.  Both borrow the famous phrase from a former tobacco executive for their titles, and both accuse various industry's trade associations and individual companies of hiding the truth to protect corporate profits.

The Shulman review includes the following regarding the industry's lobbying role:


Some parts of the story are wrenchingly familiar. Just as tobacco executives twisted the science and strove to manufacture uncertainty about the dangers of their products even when fully aware of them, so did the chemical industry undertake a similar campaign through its main lobbying arm, the Manufacturing Chemists Association (now the Chemical Manufacturers Association).

It's unclear whether Mr. Shulman wrote that or if it is extracted from the book, but the Chemical Manufacturers Association is no longer in existence, at least by that name, as it has been called the American Chemistry Council for the last 10 years.  Hopefully the rest of the book is more up to date.

In any case, the book's authors are scheduled to appear at the National Book Festival being held on the Smithsonian Mall on Saturday, September 25th.
Posted by The Dake Page at 1:54 PM No comments: Links to this post 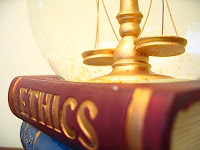 OMB Watch, a watchdog organization focusing on scrutinizing Office of Management and Budget activities, has given support to comments filed criticizing the Department of Interior's proposed scientific integrity policy.  The policy is in response to the March 2009 memo from President Obama establishing six principles for scientific integrity.  OMB Watch joins comments filed by the Union of Concerned Scientists and other public interest and environmental groups in saying that the policy "fails to address the full range of threats to scientific integrity at DOI, such as those evidenced by abuses at the former Minerals Management Service."

The commenters do agree that the proposed policy "does take steps to prevent misconduct by scientists."  But they charge that it "fails to protect scientist whistleblowers" and "does little to improve either the transparency of scientific activities or the ways that scientific information is used in decision making."  They further state that the proposed policy effectively "does nothing to prevent political interference with science."

OMB Watch and the Union of Concerned Scientists provide comments that discuss three areas where reforms are needed: 1) protecting government scientists, 2) making government more transparent, and 3) gathering scientific information and advice.  More information can be found at OMB Watch, the comments themselves, and the web site of the Union of Concerned Scientists.

Recommedations are more than a year overdue.
Posted by The Dake Page at 2:43 PM No comments: Links to this post

Manufacturers and importers of chemicals in Europe have been pretty busy lately finalizing their extensive registration packages for REACH.  At least those that must meet the November 30, 2010 registration deadline for high production volume and substances of very high concern.  But the European Chemicals Agency is reminding everyone not to forget another looming deadline - notification under the regulation on Classification, Labelling and Packaging (CLP).

With the first deadline for notifications being January 3, 2011, just one month after the first REACH registrations are due, ECHA is concerned that companies will forget about this other obligation.  The CLP regulation requires "all chemical companies operating in the EU market...to classify and label their hazardous substances according to the CLP rules."  All notifications go into a central inventory database maintained by ECHA.  And ECHA is estimating that there will be millions (yes, millions) of notifications, which includes information on hazard that will go onto labels of substances and mixtures.  Also included are a standard set of "pictograms, signal words, hazard statements and precautionary statements" that will "allow manufacturers, importers, downstream users and distributors to easily share information on the hazards of substances and mixtures."

More information on the CLP requirements and how to notify ECHA can be found on ECHA's CLP page.  Click on the listings in the left hand column for specific guidance and time lines.
Posted by The Dake Page at 1:37 PM No comments: Links to this post

Nano Nano: Yesterday the EU, Today the US pushes for new use rules on nanomaterials 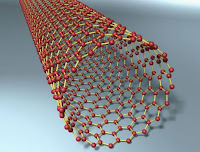 Yesterday I noted that the EU President had called more stringent regulation of nanomaterials, those very small versions of substances that may, or may not, present a different risk pattern than their larger cousins.  But the EU isn't alone in pursuing greater regulation.  The US EPA has now issued a Final Rule for "Significant New Uses" of several specific nanomaterials called single- and multi-walled carbon nanotubes.  As the name suggests, these materials basically look like tubes of chickenwire, which may be either single (like the photo) or have more than one layer of chickenwire tube.

The significant new use rule (or lovingly, a SNUR), may be the beginning of wider EPA rulemaking activity on nanomaterials.  While nanotubes have some particular differences from other types of nanomaterials, for example, fullerenes (also known as buckeyballs as the base form was named after Buckminster Fuller, the developer of the geodesic dome, which the fullerenes resemble in structure), the actions taken could be a steppingstone for changes in the way other nanomaterials are regulated as well.  The SNUR addresses several issues including releases to water or dust emissions of such small particles, as well as how to deal with articles such as those products made from plastic where residues or erosion of substance may lead to nanoscale releases of the base chemical. One potential problem raised is that long, thin nanoscale materials such as nanotubes may act like asbestos fibers and find their way into the furthest reaches of the lungs.  Whether that is the case or not, the concern is there and is being raised by such people as those at NIOSH.

Where this will go is still a question, but we may find out sooner rather than later as it is expected that a broader SNUR being developed by EPA will be sent to OMB for review in the next few months.

More to come on the nanomaterial front as there are reminders from regulators and advocacy groups that everyone took the safety of GMOs for granted until a public outcry, whether justified or not, began halting development.  The goal for nanomaterials has been to develop an appropriate mechanism for assuring safety.  Though in a way it is like closing the barn door after the horses have escaped since many of the products we have been using for years already contain nanoscale materials in their composition.
Posted by The Dake Page at 1:47 PM No comments: Links to this post

Nanomaterials are substances that are very very small, but they have been making very big news in recent years.  Regulatory bodies in the United States, the European Union, and other jurisdictions have been trying to figure out how to, or even whether or not to, manage materials that may be the same as materials already evaluated...except for the size.

And therein lies the problem.  Nanomaterials are so small that they may have different properties than the same substance in a larger size.  The bigger version may not be so much of a toxicology problem, for example, because the particles are too big to get into the body in sufficient amounts.  But make that same material in very small particle sizes and suddenly it can get into the lungs, the bloodstream, and even pass through cell membranes.  Or maybe not.

That uncertainty has led to the recent calls by the EU President for an increase in the public's "right-to-know" about nanomaterials in products used by consumers. The proposal includes calls for a mandatory registry of nanomaterials so that regulators and the public can see where they are being used.  He also wants to see nanomaterials noted on labels so the public can have the information they need to choose whether to use or not use.  There were also calls for member states of the EU to develop national strategies.

Is all this needed?  Many argue that it is not.  Most nanomaterials are just smaller versions of chemicals or products that already undergo regulatory review.  In theory, any review should include the form in which the material is placed on the market.  And once in an article or product, the nanomaterial acts as the article or product, not as a nanomaterial.  But then others disagree.  Nanoscale materials may have very different properties than the bulk material.  Think of a big chunk of iron versus iron powder.  Now think of iron powder versus powder so fine that you can't even see it.

So the EU has made a proposal and time will tell what member states or the EU itself will do.  Likewise the United States is struggling to determine the best way to ensure that nanomaterials are as safe as their non-nano equivalents.  But then given the debate over whether TSCA has been a sufficient regulatory vehicle to ensure safety, there is no question that nanoscale materials will be a consideration in any new path forward.
Posted by The Dake Page at 2:22 PM No comments: Links to this post