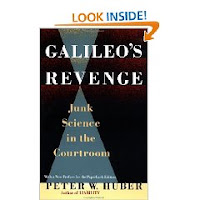 Galileo’s Revenge is actually an older book published in 1991, and the author has written several since that time. But it is definitely must reading for both scientists and lawyers. Peter Huber is believer in free markets and works at the conservative Manhattan Institute. He is considered an expert on liability lawsuits and clearly feels that courts have mismanaged tort law by allowing spurious claims to move forward, often resulting in huge monetary awards to plaintiffs on questionable science. I suggest the reader quickly move beyond this motivation and seriously consider the information that is put forth in the book.

The book provides several chapters of example cases illustrating the abuse of the courtroom by “experts” pushing specious, and often illogical, scientific explanations for serious injuries or harm. He includes the famous sudden acceleration cases in which the Audi 5000 was targeted as inexplicably bursting forward even though the driver “had their foot jammed on the brakes” (though nothing was shown to be wrong with car). Also liabilities associated with accusations that obstetrician mishandling of birth caused cerebral palsy (since proven false), chemically-caused disease (most of which was shown to be untrue), cancer caused by trauma (not true), the mosaic theory against Benedectin (shown to be specious), and ignoring lifelong smoking to “prove” asbestos caused cancer, etc. There are even cases won by plaintiffs because they had real fear of living close to tuberculosis patients even though there was no medical basis for such a fear. One could add other examples that have occurred since publication of the book.

But the real thrust of the book is how the courts have gotten away from a landmark 1923 ruling (Frye), which “allowed experts into the courtroom only if their testimony was founded on theories, methods, and procedures ‘generally accepted’ as valid among other scientists in the field.” This held sway until the 1970s when expert testimony came to be allowed “if scientific, technical, or other specialized knowledge will assist the trier of fact to understand the evidence or to determine a fact.” According to Huber, at this point mainstream scientific consensus was no longer a requirement, and any fringe theory could be advocated in the courtroom even if it was in conflict with established scientific belief. Together with liability insurance and the tendency to sue those with deep pockets, Huber believes this accounted for many of the huge awards being given to cases based on questionable, or even false, scientific and medical testimony. He spends some time in each chapter describing the unscrupulous “experts” that were hired to provide the needed testimony in such cases.

This book predates the 1993 Daubert ruling, which provided for standards of evidence to be used in court. Daubert superceded the Frye standard of generally accepted by the scientific community, and set a number of additional guidelines for the court to use to determine scientific reliability: testable technique or theory; known error rates of technique or theory; and methodology that has been peer reviewed. These are similar to some of the suggestions offered by Huber in his final chapters. He notes that “a scientific fact is the collective judgment of a specialized scientific community. Good science is defined not by credentials but by consensus.” He argues that there must be careful development of rules for the admissibility of legitimate evidence. There should be a scientific consensus on what the data tell us, not some theory acceptable only to the expert on the witness stand.

I highly recommend this book as a thought starter for all scientists and lawyers. From here readers should move on to more recent books on the topic. And consider Huber’s final words as he suggests that “the best test of certainty we have is good science – the science of publication, replication, and verification, the science of consensus and peer review; the science of Newton, Galileo, and Gauss, Einstein, Feynman, Pasteur, and Sabin; the science that has eradicated smallpox, polio, and tuberculosis; the science that has created antibiotics and vaccines. Or it is, at least, the best test of certainty so far devised by the mind of man.”
Posted by The Dake Page at 9:41 AM No comments: Links to this post

Today the US Senate voted 79-17 to "give the Food and Drug Administration authority to regulate the content, marketing and advertising of cigarettes and other tobacco products" according to a story in the Washington Post. The bill would give regulators "new power to limit nicotine in cigarettes, drastically curtail ads and ban candied tobacco products aimed at young people." The vote now sends the bill back to the House, which had previously passed a similar bill. Speaker Pelosi apparently believes the House can simply pass the Senate version and send it on to President Obama, who has supported the idea despite the fact that he is a smoker who has struggled to quit (or perhaps because he is a smoker who has struggled to quit).

Many may not realize it, but tobacco products have been exempt from the normal regulation administered by the Food & Drug Administration. This bill would change all that.

Supporters of the bill say it is long overdue, and that it will save hundreds of thousands of lives annually and reduce the "$100 billion in annual health care costs linked to tobacco," which is considered one of the "leading preventable causes of death in the United States" according to those quoted in the Washington Post story.

While no opponents of the bill - which got bipartisan support - were quoted in the Post article, there are many who believe that regulating tobacco is an unwelcome intrusion into personal choices. They point to the inability of Prohibition to reduce alcohol consumption, and its eventual repeal.

So, is it a good idea for tobacco use to come under the regulatory arm of the FDA? Will it save lives? Reduce health care costs? Place a burden on the tobacco industry? Fail to result in changes in smoking habits?
Posted by The Dake Page at 3:55 PM No comments: Links to this post