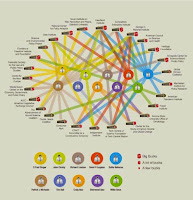 We've known it for a long time, but a recent analysis of court documents has provided further proof that fossil fuel corporations and trade associations (aka, lobbyists) have intentionally worked to mislead the public about man-made climate change. From the Guardian:


Peabody Energy is the euphemistically deceptive name for the biggest coal mining company in the United States (but hey, Peabody Coal sounds dirty, so voila, it's Peabody Energy). On April 11, 2016 the firm declared Chapter 11 bankruptcy, which meant in order to avoid paying their debts they had to file substantial financial records with the courts. Those records, like other bankruptcy filings for other companies before them, have documented how Peabody and other fossil fuel companies and their lobbyists have funded the denial of climate science for decades.

Among the deniers being funded by Peabody Energy are:
Individual denier scientists were also funded by Peabody (and others), including:
And these are not the only ones. Bankruptcy filings by Alpha Natural Resources (another euphemism for one of the country's largest coal companies) revealed that Chris Horner, an attorney with the Competitive Enterprise Institute (itself a lobbying firm), was being paid to protect coal interests (hence his constant misrepresentation of the science). In addition, records show another climate denier and lobbyist, Patrick Moore, has been paid by coal interests to speak on their behalf.


“The breadth of the groups with financial ties to Peabody is extraordinary. Thinktanks, litigation groups, climate scientists, political organisations, dozens of organisations blocking action on climate all receiving funding from the coal industry,” said Nick Surgey, director of research for the Center for Media and Democracy.


Peabody Energy and Alpha Natural Resources are not alone in funding climate denial. Records show that Exxon was well aware that fossil fuel burning was causing man-made global warming as far back as the 1960s. They initially undertook an extensive scientific program to determine the cause and effect, but after determining that the ramifications to their profit margins were significant, they shut down the program and instead invested in denying the science and funding climate denial and a broad network of lobbyists, front groups, and malleable scientists like Fred Singer and others. Collusion among the various lobbyists, key spokespeople, and media outlets also recently came to light.

The prior knowledge and then suppression of that knowledge by Exxon follows the playbook of the tobacco industry to deny smoking causes cancer. In both cases, corporate denial and subterfuge results in huge human health and environmental costs to society. The similarity to the tactics used by the tobacco industry is why once again many state attorneys general have banded together to launch investigations into Exxon's (now ExxonMobil) deceit. As a public company, stockholders have raised the questions to corporate executives of whether their knowledge and obfuscation endangers their stock holdings.

So once again fossil fuel interests have been caught paying for climate deniers to mislead the public and misrepresent the science, all to protect the profit margins of fossil fuel corporations. As these bankruptcies show, however, fossil fuels have peaked and businesses are failing due to a combination of mismanagement, fraud, and the higher and higher costs of trying to extract fossil fuels from ever more difficult locations. Still, these companies aren't going to give up their remaining profits without a fight, no matter how much deceit and collusion needed to do so.
Posted by The Dake Page at 2:48 PM

Why was Hillary and the Clinton empire left off the list of those receiving funding from international and domestic lobby groups?