Are Politicians Ignorant or Dishonest When it Comes to Science? 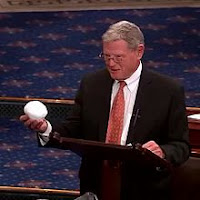 I'm about halfway through reading a new book by Dave Levitan called Not a Scientist: How Politicians Mistake, Misrepresent, and Utterly Mangle Science. The main title is derived from a constant refrain among Republican politicians during the last presidential election. While declaring they were "not a scientist," they would then go on to issue statements directly contradicted by science. I'll post a full review on Goodreads and Amazon when I'm finished, but there is one issue that strikes me is need of further discussion.

As Levitan's subtitle suggests, he refrains from labeling politicians as dishonest or outright liars despite their repeated spouting of abject falsehoods. One wonders if this is in an attempt to be fair (aka, false equivalence) or avoid potential lawsuits. It does beg the question: If politicians continue to say things that are not true, are they being profoundly ignorant or fundamentally dishonest?

Each chapter identifies the "types of errors" routinely made by politicians (and others) when discussing science. They include "oversimplification," "cherry-pick," "ridicule and dismiss," "literal nitpick" and others. Many of these errors (aka, tactics) have been discussed on this page over the last decade, though often under different labels.

As I said, I'll do a full review when I've finished the book. For now I want to address the idea of intent that Levitan tries to avoid.

Let's take an example where Levitan discusses Republican Senator James Inhofe's statement regarding regulations on fracking. An infamous climate denier (he was featured in an earlier chapter for his "snowball" speech), Inhofe represents the fossil fuel industry in his home state of Oklahoma (often to the detriment of his constituents). Levitan points out that Inhofe issued a press release with the following statement in an attempt to block regulations and legislation to protect the public from activities related to hydraulic fracturing ("fracking") for natural gas:

"Since 1949, my state of Oklahoma has led the way on hydraulic fracturing regulations, and just like the rest of the nation, we have yet to see an instance of ground water contamination."


It won't come as a surprise to learn that Inhofe's statement isn't actually true. Levitan focuses on the "mistakes" that Inhofe makes and describes the fracking process, issues, and actual facts well. He explains how this fits into the "error" of "the literal nitpick." But one point near the end of his discussion exemplifies the problem: Inhofe's statement was very highly focused on the "the physical act of cracking rocks through hydraulic fracturing." In other words, he chose his words very specifically to be "true" while making them mean something that wasn't true. The fracking process has multiple components, and Inhofe diligently cherry-picked one aspect that he could tease out as not causing the problem while ignoring all the other components that are, in fact, of greater concern.

Which gets to my point. Republican Senator James Inhofe, from the fossil fuel dependent state of Oklahoma, and who receives substantial campaign funding from those fossil fuel companies and lobbyists, intentionally chose highly selective words to sound true while misleading other policy makers, the general public, and his own constituents. He intentionally chose to say something that was misleading to reach a goal that his financial supporters asked him to reach.

My use of the word "intentional" above is intentional in its own right. Inhofe has served as the senior U.S. Senator for 23 years, with 7 years as a U.S. Representative before that (plus had previously been mayor of Tulsa). He chaired the Senate Committee on Science and Public Works - twice! He has had ample staff and constant access to the scientific community. The facts have been explained to him myriad of times.

So is Senator Inhofe still profoundly ignorant of the science despite all these resources? Is he accidentally being highly specific in his word choice to give the impression of truth while extrapolating patently misleading and false conclusions? Has he somehow been duped for more than 30 years of his time in Congress?

Senator Inhofe actively and intentionally "cherry-picks" and "literal nitpicks" his words to further the interests of his campaign contributors. He or his staff meet with fossil fuel executives and lobbyists routinely to plot their attack on regulations that might impact the bottom lines of those companies and their lobbying arms. Lobbyists work directly with the staffs (and the lawmakers themselves) to craft language that they can argue is strictly factual (even when it isn't) while extrapolating it deceive. This is the case with Inhofe's example statement and many others. He takes a very narrow "factoid" and uses it to argue for a broad ban on regulations for which the narrow "factoid" is not relevant, all while ignoring the voluminous evidence that contradicts his position. There is a word for the action of actively deceive the public and fellow lawmakers.

Inhofe isn't the only one who does this, of course. Texas Senators Ted Cruz and John Cornyn, along with Representatives Joe Barton, Lamar Smith, and many others all actively mislead the public in service of their fossil fuel benefactors.

All lawmakers, of course, work with stakeholders (which includes lobbyists for all special interests, and at least in theory, the public) to educate them on issues so they can make honest judgments. The problem is when those interests (aka, campaign contributions and other "perks") cause lawmakers to intentionally mislead their own constituents.

Inhofe is hurting Oklahomans because of his intentional deceptions. Oklahoma has had a huge increase in earthquake activity. The cause - oil and gas extraction activity. Oklahoma also is severely endangered by man-made climate change, as its largely arid environment is highly vulnerable to climate change's effects, including higher risk of agricultural failures, extreme weather events, and heat- and pollution-related health effects. Senators and Representatives in Texas also endanger their constituents in a similar manner.

So to answer the question posed in the title: is it ignorance or dishonesty?; the answer is rather obvious.


[Photo: Senator James Inhofe (R-OK), from Wikipedia]
Posted by The Dake Page at 11:00 AM No comments: Links to this post