Administrator Jackson, with a small entourage that included Steve Owens, the new Assistant Administrator for the Office of Prevention, Pesticides, and Toxic Substances, participated in a forum this past week convened to offer the viewpoints of various stakeholders on chemical control reform in the United States. Jackson reiterated the 6 essential principles and indicated that EPA would more actively use its existing authority while TSCA reform worked its way through the legislative process.

The forum itself was sponsored by a wide variety of industry and advocacy groups, each with their own point of view of what needed to be done as legislators develop a bill to reform the current chemical control act.

There is a lot of general agreement that some form of "modernization" of the Toxic Substances Control Act (TSCA) is needed. There also was quite a bit of agreement at the general principles level (e.g., chemicals put on the market should be safe). However, the "devil is in the details" and industry prefers risk-based assessment while NGOs prefer more emphasis on reducing hazard no matter what the exposure. Industry feels EPA should do the prioritizing to identify chemicals for which companies would provide more data, while the NGOs lean more toward industry providing at least some base set data.

Both industry and NGOs have been in deep discussions with Congress all year about a reform bill. Senator Lautenberg’s staff and Waxman/Rush’s staff have been working diligently on a new bill, which suggests they won't simply just reintroduce the same old Kid Safe bill. But there is some question of when a bill might actually be introduced, and then when it might actually be passed.

My own sense is that while it’s possible that a bill could be introduced at any time, passage will require more stakeholder involvement before anything meaningful is submitted. There has been quite a bit of involvement so far, but it seemed it just wasn’t ready for prime time yet. There is, however, quite a bit of agreement of the need for further stakeholder meetings to iron out the sticky details, and to do so together so they could agree on a reasonable bill. If the forum from this past week is the beginning of further dialogue, we might just see something being passed in this Congress. If not, it's quite possible that a chemical control law will have to wait until after the current big issues of health care reform, climate change, finance reform get passed, which puts it right in the middle of next year's election campaigns.

That said, there is a real sense that all the stars are in alignment for something to happen. And with industry apparently in agreement, it seems just a matter of Congress finding the time to get it on the schedule (and assuming no major power shifts occur in the next election).
Posted by The Dake Page at 1:57 PM No comments: 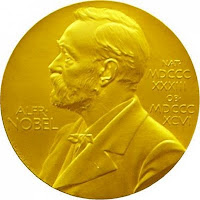 It's that time of year again...Nobel Prize week. Each day the Nobel Prize committee will announce the winners of this year's awards for achievements in physics, chemistry, physiology or medicine, literature and for peace. Each prize consists of a medal, personal diploma, and a cash award.

This year the first three announcements have involved a lot of Americans, something that isn't always the case for this international award.

On Monday, three Americans shared the Nobel Prize for Medicine "for the discovery of how chromosomes are protected by telomeres and the enzyme telomerase." Elizabeth H. Blackburn, Carol W. Grieder and Jack W. Szostak each get 1/3 of the prize.

On Tuesday, 1/2 the Nobel Prize for Physics went to Charles K. Kao "for groundbreaking achievements concerning the transmission of light in fibers for optical communication." The other half was split between Willard S. Boyle and George E. Smith "for the invention of an imaging semiconductor circuit – the CCD sensor."

And today, two Americans and an Israeli share equally in the Nobel Prize for Chemistry "for studies of the structure and function of the ribosome." They are Venkatraman Ramakrishnan, Thomas Steitz, and Ada Yonath.

The remaining prizes will be announced in the following days.

It is important to keep in mind that the Nobel Prizes are given for work that may have been done decades ago, only after the significance of their achievements have become clear. It is critical that we continue to provide support for scientists in various fields for both basic and applied research. Without it our innovation for the future is sure to suffer.
Posted by The Dake Page at 12:32 PM No comments: