Independent Climate Skeptics - Well, Maybe not so Independent After All (With Graphics) 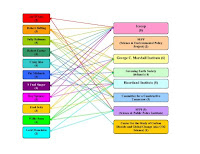 Climate skeptics like to claim that there are many independent scientists who refute the consensus of climate change. They love to cite folks like S. Fred Singer, Robert Carter, Roy Spencer (ahem, Dr. Roy Spencer), Pat Michaels, and Willie Soon. Each of these people is asserted to be some independent minded scientist bucking the trend.

Except it isn't true.

There really are only a handful of climate skeptic scientists. Some, Lord Monckton for example, have no real science background at all (the closest Monckton gets to science training is he is a certified Day Skipper for his yacht). Others have a scientific background, though only a few have any actual expertise in climate science. Others, S. Fred Singer for example, are merely figureheads who act as spokesmen for the industry. In any case, qualified climate scientist dissenters must put their data into peer review for incorporation into the analysis, just like every other scientist. Their data must be persuasive. To date it has not. Which may be why they post more on blogs than in the peer-reviewed literature.

Ah, but the climate skeptics (denialists or realists depending on if you are a real scientist or not) point to the vast array of organizations that prove that climate change is not real and/or a natural phenomenon that has nothing to do with anthropogenic carbon dioxide (CO2) emissions. The skeptics aver that these are scientific organizations, usually in a desperate effort to counter Steve B, who has demonstrated unequivocally that no scientific organization has refuted the IPCC consensus statement on climate change. 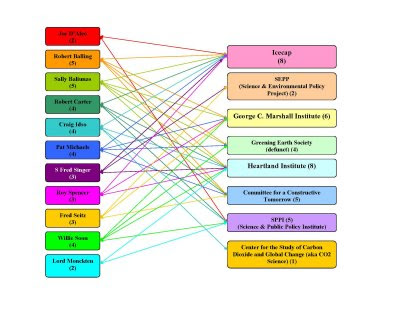 The boxes on the left side of the graphic represent some of the most often cited skeptic scientists. The numbers indicate how many of the 8 organizations to which each scientist is associated (e.g., Sally Baliunas is associated with 5 of the organizations).

The color-coded lines tie together each of these "independent" scientists to the organizations to which they are most often associated.

As can be clearly seen, there is quite a traffic jam of lines in the middle, which is why I used color-coding (otherwise it becomes impossible to tell one scientist and organization from another).

Which, of course, is the point. These organizations all hire the same handful of scientists that either agree with them or are willing to shill for them. The fact that the scientists are associated with so many organizations suggests that independence is really not particularly important.

But let's take a closer look at the organizations.

Several of the organizations - George C. Marshall Institute, Heartland Institute, Committee for a Constructive Tomorrow, Greening Earth Society - are free market lobbying organizations that have no expertise or mission regarding climate science. Except of course that these organizations promote free market and free enterprise business principles (which roughly translates to externalizing much of the societal costs to the taxpayers). Thus, since their own mission statements promote free markets, they obviously are only interested in trying to keep Congress and others from taking action that they feel will hurt their organizational goals. That in itself is part of their mission, but they try to sell it as if it were science. It isn't.

The other organizations sound more scientific, but then that is part of the playbook first used successfully by the tobacco industry to obfuscate the health effects of smoking. Folks like S. Fred Singer are no stranger to the playbook as they also were "experts" on tobacco before becoming experts on climate change. The bottom line is that these organizations are front groups for the other free market organizations and the industries most likely to be effected by any policy remedies designed to deal with climate change.

Why would supposedly reputable, independent scientists be associated with free market lobbying organizations? What benefit would the Heartland Institute be to a scientist who is studying climate change? I mean, scientists belong to scientific organizations. Organizations where they can present their research, listen to others presenting their research, and engage in scientific debate about that research. After all, that is how science is done. Scientists publish their research in peer-reviewed literature and discuss their research in scientific conferences and other venues designed for the exchange of data and ideas. Heartland Institute meetings are all about economics and free market principles (and lobbying Congressmen).

So what reason is there that "independent scientists" would be associated with free market organizations whose entire objective is to defeat any possible regulatory remedy that they feel will negatively impact free enterprise?
Posted by The Dake Page at 8:08 AM 2 comments: Links to this post