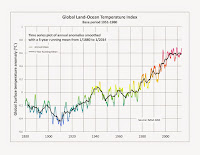 It really is mind-boggling how the Republican Party in the United States can so blatantly engage in treasonous acts against the President, all while hurting their own constituents. They continue to do this with respect to man-made climate change despite the unequivocal consensus that human activity is causing the planet's climate system to warm. Republicans even work against the best interests of their own constituents, as most Americans agree that action is necessary to deal with climate change.

The latest treasonous act by Republicans in the U.S. is their plan to disrupt the international climate talks that this December in Paris expect to result in a substantive agreement for worldwide action. Critical nations all over the world have made carbon reduction commitments. President Obama has been leading the way, engaging in agreements with China, India, Europe, and other countries that will lead to eventual stabilization of atmospheric warming and a halt to oceanic acidification due to our history of excess carbon emissions.

Republicans in Congress have stood in the way of meaningful climate action ever since President Obama was elected. Former Republican Senator George Voinovich acknowledged that in 2008, before President-Elect Obama even took the oath of office, Republican leadership instructed all Republicans to oppose anything Obama proposed: "If Obama wanted it, Republicans had to be against it."

That includes policy actions that Republicans once promoted. As early as 2003, Senator and future Republican presidential nominee John McCain offered a bill called the "Lieberman-McCain Climate Stewardship Act." McCain offered more climate bills right up until his 2008 nomination, at which time the preview to the "tea party" forced him to renounce his own bills.

Republicans were also promoting the most recent cap-and-trade bill to deal with climate change as "a free-market solution." Yes, conservative and libertarian lobbyists, and the Republican party, preferred the cap-and-trade plan over the carbon tax plan originally offered by Democrats. But once the Democrats and President Obama agreed to support ca-and-trade, that same free market system once promoted by Republicans and conservatives was suddenly called cap-and-tax. Republicans turned against their own plan just because President Obama agreed with them to move it forward.

Now the Republican party is telling our allies around the world that they won't support an agreement that hasn't even been reached yet. Why? Because the President is moving forward along with the rest of the world. Republicans, rather than come up with their own plans (or even support the plans they previously offered) are trying "to undermine...hopes of reaching an international climate change agreement that would cement his environmental legacy."

In future posts I'll have more on how climate denier Republicans like Marco Rubio, Jeb Bush, James Inhofe, Joe Barton and all of the current Republican candidates for the presidential nomination are hurting their own constituents.
Posted by The Dake Page at 9:31 AM No comments: Links to this post