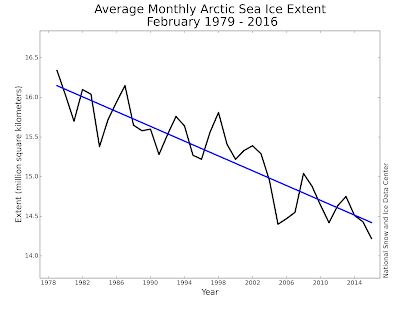 As the graph above shows, sea ice extent in February has been declining for many years, with the linear rate of decline at 3% per decade. [The previous post explains how to read the graphs] NASA and NOAA also note that February continued the trend of ten straight months of record-breaking high global surface temperatures, with the Arctic being especially hot (more than 4 degrees Celsius above the baseline).

It could have been even worse. Most of the month had almost no ice growth, in a time of year where it should be growing substantially (sea ice extent grows in winter, falls in summer). Only a late month burst of growth got it to where it was - and it was still a record low for the month. That's how bad it is. 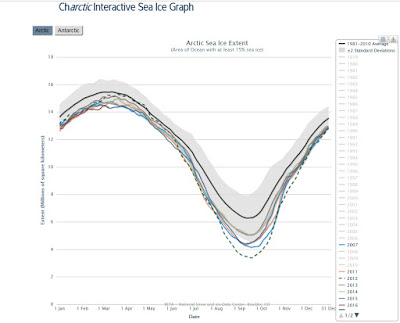 The chart above is kind of busy even though I've only selected the most recent years. You can go here and use the interactive chart to include whatever years you want.  I highly encourage looking at all the years going back. The previous post explains what the lines and shading mean.

As you can see, sea ice extent grows in winter and shrinks in summer. This happens every year, so what you want to look for is how much it grows and shrinks compared to previous years. Keep in mind that the baseline mean (the black line and gray shaded area) was lowered recently to reflect the continuing declines. [This means if we had kept the old baseline the current sea ice extent would be even worse]

The current year is the burnt red line in the upper left corner, right at the bottom of the other lines shown. Right now it's about the same as where last year was at this time (darkish blue), but only because of that late-February bump up. We're right about the maximum now, though we won't know officially until we get a little further along. That doesn't bode well as last year was only barely above the second worst minimum extent years (see where the lines reach their most downward loop around September).

Starting the melt season in such a bad maximum doesn't mean we'll set a new record minimum. You can see that at this time in 2012 the maximum in late March (dashed green line) was higher than it was in ensuing years, yet 2012 smashed the previous record minimum year of 2007 (light blue line). Because sea ice extent is highly sensitive to local weather conditions (especially wind), we simply won't know how bad the minimum will be this year until we reach it in September. But we do know that it will be a bad year because every recent year has been a bad year. All you have to do is look at where all the lines fall compared to the baseline mean - they are all below. That means the baseline mean will again have to be lowered at some point, once again tracking the race to the bottom. At some point we're likely to see an ice-free Arctic for part of the summer.

Posted by The Dake Page at 8:48 AM No comments: Links to this post