Climate Communication - What Happens When We Don't Set a New Heat Record? 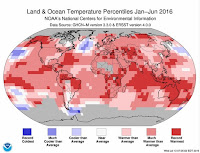 Both NASA and NOAA report that the first six months of 2016 have been the warmest half-year on record. This year, 2016, has a 99% chance of setting a new record for the hottest year ever recorded in global surface temperatures. It would surpass the previous record year, 2015, which surpassed the previous record year, 2014, thus making 2016 the third straight year setting a new heat record. But what happens when we don't set a new record?

This fact is inevitable. While increasing CO2 is causing a long-term trend in increasing temperatures, there is short-term variability that can make any year either a bit higher or lower. Check out the basics in this short video. [See also here for a good explanation of trend vs variation]

So even non-record-setting years are still getting warmer, just not record-setting warm. You can see this clearly in a NASA graphic of January-June temperature trends taken from the first link above: 2016 blows away the old records and even less warm years are well above the older years. 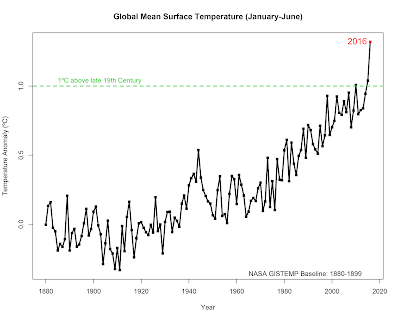 CO2 will continue to push temperatures upward over the long term. But short-term phenomena like El Nino and La Nina (and others) are what defines the level for any given year. For the earlier part of the 21st century we saw very little in the way of El Nino events after the massive 1998 El Nino that spiked temperatures higher. That is why deniers always pick 1998 as the start date for any dishonest claim of a "pause" in warming. There never was any "pause" or "hiatus," just short-term variation caused by lack of El Ninos and a series of La Ninas (the latter of which tends to dampen warming just as the former tends to enhance it). We've had a very large El Nino the last year or so, which is partially why the rising temperatures have broken the records by such a great amount (keeping in mind that the 2014 record was set without any help from El Nino).

That El Nino is dissipated and scientists anticipate a La Nina starting up this fall, so while 2016 is still likely to set a new record for the third year in a row, conditions appear to be setting up for 2017 not to set a new record. If it comes up less warm than 2016 we'll see all the climate deniers screaming "See, it's getting cooler," despite the fact that "less hot" does not equate to "cooler." [Think of your stove: the high setting is very hot, but the medium setting is not "cool."]

Just as it is inevitable that we'll have a year that is not as hot as this year (though the following years will continue the upward trend), it's inevitable that the climate denial lobbying industry will misrepresent the less hot year as "cooler." We've seen this with the non-"pause" and we've seen it with the "Arctic sea ice has recovered" every time the short-term variation gives a year where ice decreases slightly less than the previous year. These lobbyists know what they are saying is dishonestly misrepresenting the science, but they do it anyway. That is their job as fossil fuel lobbyists.

So scientists and science communicators need to be prepared to deal with the inevitable deceit of climate deniers when a year, possibly 2017, shows less warming than the previous record years.

Posted by The Dake Page at 8:07 AM 7 comments: Links to this post