Collusion Among Climate Denial Lobbyists and Their Spokespeople

An interesting thing happened as the professional climate denier industry tried to suppress the release of Merchants of Doubt, a movie based on the book by science historians Naomi Oreskes and Erik M. Conway. They accidentally proved that climate denier lobbyists are in collusion to misrepresent the science - exactly what the book and movie document.

For those not familiar with Merchants of Doubt you can read my review of the book or watch the trailer for the movie:

Oreskes and Conway carefully documented the science denial tactics of one of professional denier lobbying group, the George C. Marshall Institute. The Institute was started by Ronald Reagan appointees as lobbyist selling his lasers in space defense system dubbed "Star Wars." That program never got off the ground (let alone into space), so the Institute turned to denying whatever science issue was causing their paying customers grief, like smokestack emissions causing acid rain, CFCs causing ozone depletion, second hand smoke causing cancer, and now, greenhouse gas emissions causing global warming. In all cases the Institute knew it was denying the science, and in all cases they were wrong, but they did it to service their corporate benefactors. You may have missed these previous episodes of climate denial, but you probably know that one of the denialist industry's favorite "skeptics" is Roy Spencer, who just happens to sit on the Board of Directors of the George C. Marshall Institute.

So you can see why the professional denial industry would be eager to suppress the movie, which features blunt interviews with professional denier spokespeople Fred Singer (who previously denied smoking caused cancer) and Marc Morano (a political operative with a long history of far right wing attacks on politicians, the science, and scientists). The book and movie note that both, along with others, have received substantial support from the denial industry lobbyists.

Which gets us to an interesting revelation as these deniers scrambled to attack the movie. Take a look at the following email distribution list: 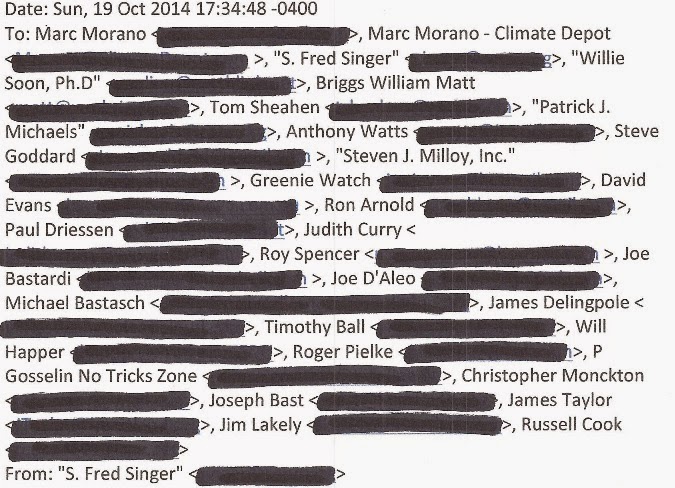 The list comes from an email string in which Fred Singer asks his buddies in the climate denial industry how to attack Naomi Oreskes and/or the movie director Robert Kenner. The emails themselves are revealing in that they show how they plan to harass the principals - remember that Singer and Morano and others agreed to be interviewed for the movie. But even more revealing is that all the major "independent" climate deniers are in collusion with each other.

This isn't actually a surprise. While deniers claim that there are many people who dismiss the overwhelming scientific consensus, the truth is that there are a very small number of lobbyist-associated scientists and political operatives that are the focal point of denial - exactly as the book and movie document. You can see that the list includes the handful of scientists who act as skeptics, along with the people on whose behalf they act - paid lobbyists like Morano, Horner, Milloy, Ball, Taylor and Bast, and key disinformation outlets like Monckton, Delingpole, D'Aleo, Goddard, and Watts. They work together to create falsehoods and misinformation about the science, feed it out onto the media at all levels, and then encourage the amateur deniers to unskeptically plagiarize the misinformation so that it saturates the blogosphere.

In fact, these people and the lobbying organizations and their front groups are closely linked in collusion. The following shows just a subset of the supposedly "independent" scientists who act as "skeptics" for the lobbying industry. All have multiple connections to lobbyists and front groups. 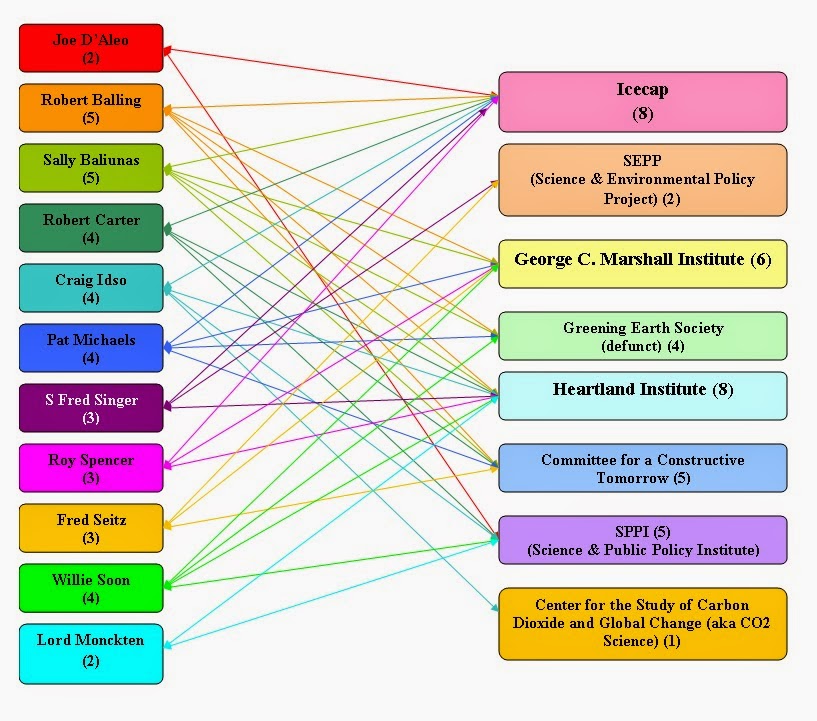 But it doesn't stop there. The key players are actually connected to a web of front groups and secretive funding lobbyists. 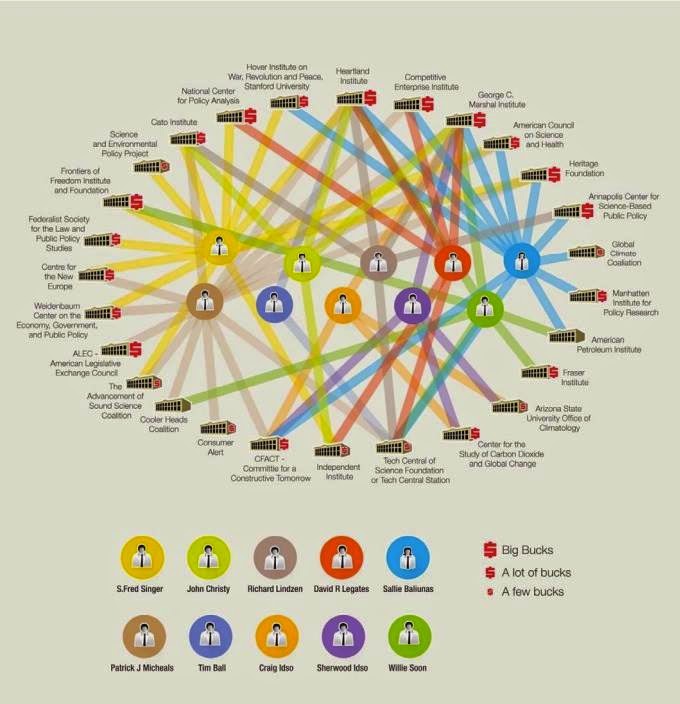 And what is the goal of this network of denial? To "manufacture doubt." As Marc Morano admits in the Merchants of Doubt movie and others have documented repeatedly, the tactics of climate denial lobbyists, the ones they have used for every episode of science denial going back to the tobacco companies denying smoking causes cancer, are: 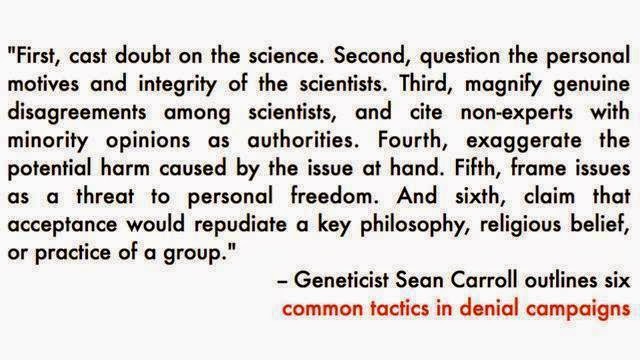 The email distribution list demonstrates that this denial network works in collusion to misinform the public and provide cover for policymakers (most of whom are already receiving substantial campaign donations from fossil fuel and libertarian/conservative interests directly). The denial lobby network routinely communicate with each other and plan their attacks, which is why when the lobbyists seed a particular misinformational talking point into the blogosphere it immediately saturates the internet with the same misinformation. It's an intentional strategy.

More on Exposing Climate Denialism in future posts.
Posted by The Dake Page at 8:57 AM