Why Climate Deniers Desperately Need "The Pause" in Warming; And Why The Pause is not a Pause

A new article by scientists Dana Nuccitelli and Michael Mann reiterates the fact that the climate system continues to warm. Their opening line begins "over the past 17 years, the Earth has warmed rapidly." This continued rapid warming is borne out by the overwhelming science during the period climate deniers often claim there to have been a stoppage in warming (and even more bizarrely, a "cooling").

The climate is warming rapidly, so how can climate deniers claim it isn't?

Nuccitelli and Mann explain it quite nicely in their article, which I urge you to read in full. To begin with, deniers always ignore all the data sets except their preferred single set of satellite data, which deniers claim shows cooling. With that in mind, Nuccitelli and Mann note:


First of all, it is wrong: the satellite data clearly show ongoing warming over the past two decades.

Secondly, the satellite data in question only estimate the temperature of the atmosphere above Earth's surface. We, and most other living things, reside on Earth's surface, and the data tell us that surface warming continues unabated.

Finally, warming of the atmosphere accounts for only about two per cent of overall global warming; more than 90 per cent goes into heating of the surface and the oceans. That heating contributes to the melting of the ice sheets, and the acceleration of global sea level rise.


Clearly the "pause" is not a pause at all. One of the best ways to see the fallacy of deniers claiming a pause is to look at the following global land-ocean temperature record: 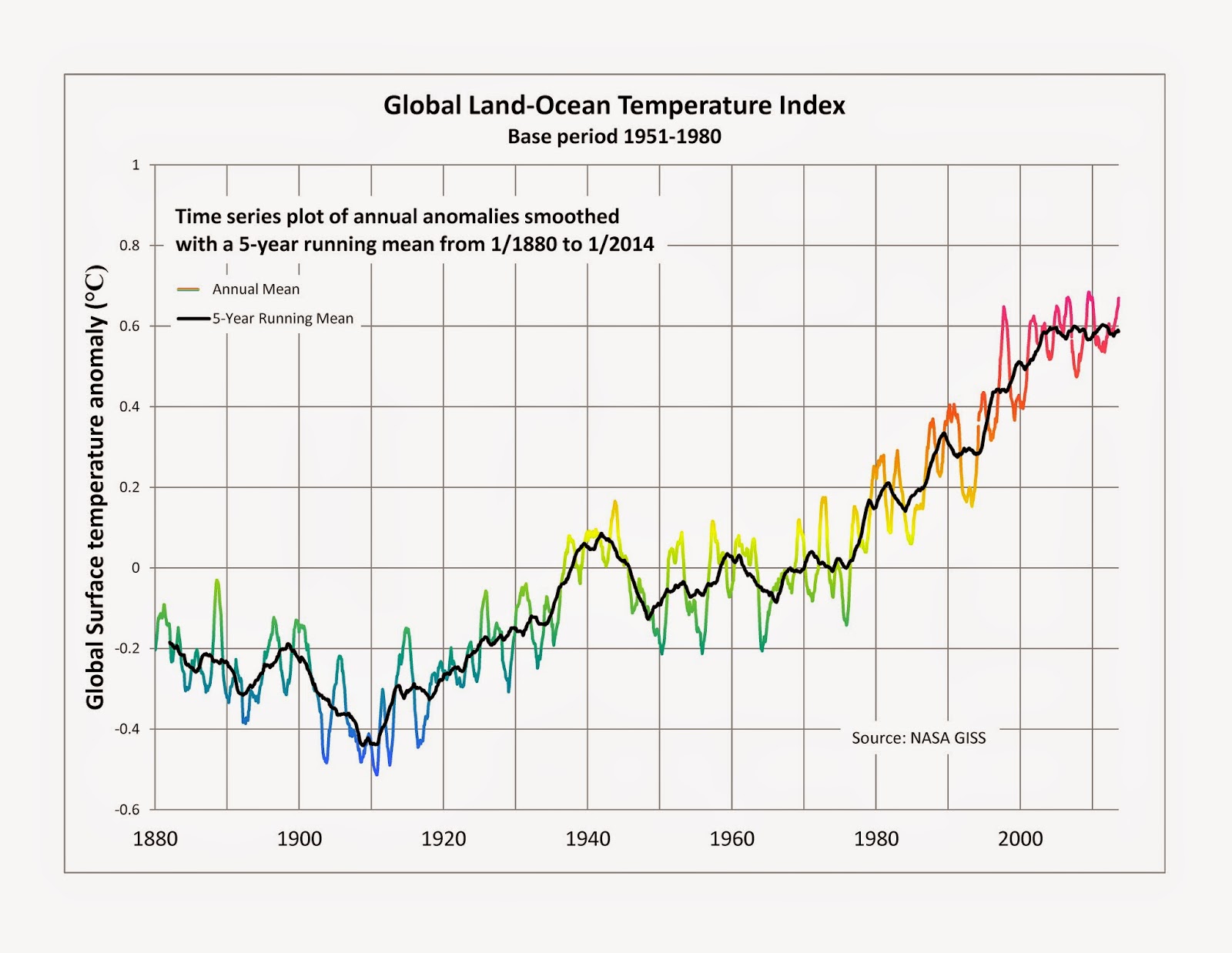 As is evident to everyone, temperatures vary from year to year due to short-term influences like El Nino and La Nina events, volcanic action, aerosols, and natural variability. Just as evident to everyone is that the overall trend is one of warming. There are short periods of time where the rate of warming is slower or faster, and even a period where warming seemed to have stopped (this was a temporary condition when toxic aerosols from unregulated air pollution were masking the warming effects of CO2), but clearly the trend is warming.

In short, it's clear human activity (mostly burning of fossil fuels) is warming the climate system. The rate varies due to short-term influences, but the main driver of the warming is increased CO2 in the atmosphere. The science on this is unequivocal (i.e., clear and undeniable). In recent years, even more of the warming has been going into the oceans (where most of it goes anyway) as the lack of El Nino, the recurring La Ninas, the increased volcanic activity, and the increased aerosol emissions from rapidly growing China all have contributed to a slower rate of increase in the warming of the atmosphere. That heat is still there; it's just that more of it is in the oceans. This is temporary. El Nino's return and other indicators helped 2014 become the hottest year on record, and 2015 is already on pace to surpass that record. The evidence supports the idea that the rate of warming is actually increasing, and will likely speed up rapidly.

So why do climate deniers keep insisting that "the pause" means climate change isn't happening or has stopped?

Because they have no science to back up their denial. If you look at the history of climate denial you'll see deniers hop, skip, and jump from one false interpretation to another. They must ignore the vast majority of data, extract one factoid, and create an entire fictitious story line that is contradicted by the actual truth. That is why you see deniers argue that a single paper is the "death knell" for man-made climate change, only to have the author of any legitimate study come out to explain it does no such thing. Deniers must ignore the science and fabricate conclusions that are divorced from reality. And that's what they do every single time.

Which begs the question, how do scientists and the honest public deal with climate denial? I'll have more on that in future posts, but the first thing that scientists can do is be careful about adopting the language of denial lobbyists. The "pause" or "hiatus" language is denial language. It was created by lobbyists to falsely throw doubt on the continued warming. As denial lobbyists intended, the denialosphere of paid, ideological, and conspiratorial bloggers quickly saturated the internet with the two misnomers. That was to be expected. But scientists started using the terms in their own blogs and conversations, thus playing into the lobbyist's intended deception.

Instead, scientists should have clearly explained that short-term influences routinely cause short-term variations and that the overall trend continued. Perhaps a more accurate term should have been used by scientists ("faux pause" was belatedly adopted by some climate scientists, but even that mimes the lobbyist-preferred misdirection). The problem here is that scientists are not always very good at communicating with the public, whereas lobbyists have ample experience in that regard since the very job of lobbyists is to manipulate public opinion and provide cover for political allies. While I can't recommend scientists become more political, I can recommend scientists spend more time reaching out to the public and communicating the science accurately.

In that regard, there is much more work that needs to be done.