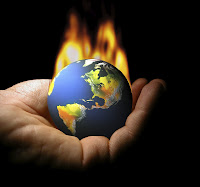 Specifically, in the the Paleocene-Eocene Thermal Maximum (PETM), which was about 55.9 million years ago, and according an the international team of research geologists, is "the best analog we have for current global warming."  And that rate of carbon release "may not allow sufficient time for the biological environment to adjust."

As noted in a recent Science Daily article, there are some uncertainties with the core data during this time period because the cores contain layers of calcium carbonate, and "when large amounts of greenhouse gases -- carbon dioxide or methane -- are in the atmosphere, the oceans become more acidic, and acid dissolves calcium carbonate."  The concern is the change may appear more abrupt than it actually was because of the incomplete record.  So the fact that the PETM rate may have been perhaps slower than we think emphasizes even more the fact that the current rate of carbon release is 10 times faster.  In short, it could be more than 10 times.

"We looked at the PETM because it is thought to be the best ancient analog for future climate change caused by fossil fuel burning."

According to the researchers, "The outcome was a warming of from 9 to 16 degrees Fahrenheit and an acidification event in the oceans."  And that's not good.  Furthermore, according to Lee R. Kump, a professor of geosciences at Penn State:

"Rather than the 20,000 years of the PETM which is long enough for ecological systems to adapt, carbon is now being released into the atmosphere at a rate 10 times faster. It is possible that this is faster than ecosystems can adapt."

For those who want to read the original journal article, the full citation is: