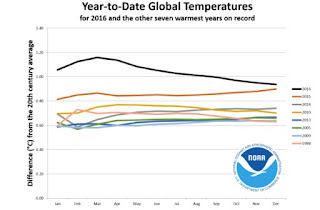 NASA and NOAA issued a joint press release on January 18, 2017 confirming what climate watchers had expected - 2016 was the warmest year on record globally. "Earth’s 2016 surface temperatures were the warmest since modern recordkeeping began in 1880," said the press release. The announcement was carried by most major news outlets, including a full front page article in the New York Times. Questions arise as soon as any such announcement is made, so this post is focused on answering those questions.

2) When was the last record-setting year? 2015, which surpassed the previous record-setter 2014. That means 2016 is the third straight year breaking the record for warmest year. That is highly unusual, if not unprecedented. In fact:

"Results from the world’s top monitoring agencies vary slightly, but NASA, NOAA, the Japan Meteorological Agency, and the U.K.’s Met Office all agree: 2016 was unprecedented. The heat was experienced differently around the world, but most regions were unusually warm to downright scorching for much of the year."


3) But climate is a trend, not a single year. Does breaking the record matter? Yes. As NASA/NOAA note: "The 2016 temperatures continue a long-term warming trend." NASA's Goddard Institute for Space Studies (GISS) further notes:

“2016 is remarkably the third record year in a row in this series,” said GISS Director Gavin Schmidt. “We don’t expect record years every year, but the ongoing long-term warming trend is clear.”

"The planet’s average surface temperature has risen about 2.0 degrees Fahrenheit (1.1 degrees Celsius) since the late 19th century, a change driven largely by increased carbon dioxide and other human-made emissions into the atmosphere."


Scientists widely agree an increase of 1.5 degrees Celsius is highly significant and a major global problem. We're almost there already, and because of the levels of CO2 already emitted, we are virtually guaranteed to pass that threshold much sooner than originally expected.

5) We had a strong El Nino during part of 2016. Was this the reason for the record? No. While warming in the early part of 2016 was enhanced by the strong El Nino, the El Nino had largely dissipated mid-year. Gavin Schmidt, director of GISS, notes that 2016 would have broken the record even without the El Nino.

6) Okay, three straight years is unusual. Will 2017 set a record for the fourth year in a row? We won't know until later how this year will trend, but it seems unlikely it will set yet another new record. While each year is subject to short-term variation, it is the long-term trends that matter. The long-term trend clearly shows we are warming the climate system.

7) What does it mean if we don't set a new record? This was discussed earlier here.

8) The climate is getting warmer. So what? Virtually all climate scientists agree that the continuing warming trend is highly significant. We are already seeing its effects: melting of the Arctic sea ice, Greenland land ice, and glaciers; sea level rise; ocean acidification; changes in migratory patterns; economic dynamics; national security; human habitats; human and ecological health; and every aspect of human existence.