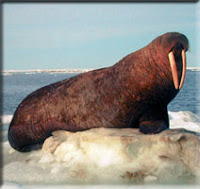 A US Geological Survey study suggests that the fast melting of Arctic sea ice is the reason why walruses are coming up onto land in exceptional numbers.  Normally walruses spend much of their time on sea ice, where they rest from their feeding dives, avoid predators, and even give birth.  But when the sea ice is scarce they hop up onto land.  Radio transmitters on tracking collars show researchers that walruses appear to be spreading out and spending substantial time looking for sea ice.

Last September saw 10,000 to 20,000 walruses haul up onto land, coinciding with the lowest ice extent of the year.  But this year the Arctic sea ice has been melting at near record pace, with July setting a new record for the lowest extent in that month.  Weather conditions in the Arctic suggest that August ice melt could be accelerated, which could mean the September minimum will be much lower than last year, and with less ice there could be more walruses up on land.  That puts them at greater risk, both from land predators, density-based aggression, and inability to find food.

More information on this study, as well as other walrus research, can be found on the USGS site.
Posted by The Dake Page at 4:31 PM