Liberals and Conservatives Read Different Science Books, And That is a Problem 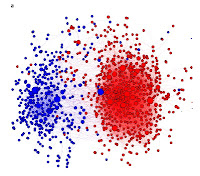 As Republicans and others who identify as "conservatives" continue to attack science and scientists, it begs the question of where they are getting their information. EPA Administrator and fossil fuel lobbyist Scott Pruitt, for example, recently denied his own agency's findings on climate science while taking questions on a conservative radio program. It turns out that is part of the problem.

The fact that he was repeating known lies - in contradiction to the science and EPA's own documentation - on a conservative talk radio show is how "conservatives" falsely inform themselves. They deny the science, and reinforce that denial by repeating it ad nauseam in their bubbles. Liberals do the same, though in most cases they at least get the science right (the exceptions include anti-vaxxers and anti-GMOs).

A study published this past April in the journal Nature Human Behavior helps explain at least part of this discrepancy - liberals and conservatives read totally different books about science.

The study took advantage of the feature on Amazon and Barnes and Noble websites that offer suggestions for similar books when you buy one. The "other books bought by people who bought this book" feature creates links between thousands of books, and thus the books it selects provide substantial information about buying habits. The researchers looked at political books with either a liberal or conservative slant, then examined the list of science books offered as "linked."

The good news is that people who buy political books (whether clearly liberal or clearly conservative) do tend to also buy books about science subjects rather than non-science subjects.  But the researchers also found that there is a difference between the science books read by liberals and conservatives.

Liberals prefer to read books from disciplines focused on basic sciences such as anthropology, astronomy, and zoology, while conservatives are more likely to purchase books that focus on applied sciences such as organic chemistry, medicine, and law.


The real stunner, however, is that even when liberals and conservatives choose within the same discipline they rarely buy the same books. For example:

buyers of conservative books in the domains of climate science, environmental science, political science, and biology tend to purchase books that are tightly clustered on the periphery of the discipline's co-purchase networks, while liberals are more likely to buy a diverse set of books...


In a nutshell, conservatives primarily buy books that reinforce their narrow view of science while liberals buy a greater diversity of books that expand their knowledge and understanding.

This explains, in part at least, why liberals are more likely to have a better understanding and acceptance of scientific consensus, for example on evolution and climate science, while conservatives choose to dismiss the consensus in favor of a more narrow interpretation guided by political ideology. Again, the problem isn't exclusively to conservatives as there are far left liberal views that also deny the totality of the science. This liberal denial, however, tends to be a much smaller fringe wing than the conservative denial, which today has largely enveloped the entire "conservative" movement and, indeed, the Republican party has become the party of denial.

The authors conclude that their study:

...underscores the need for research into remedies that can attenuate selective exposure to 'convenient truth', renew the capacity for science to inform the political debate and temper partisan passions.

The full study can be read online.
Posted by The Dake Page at 9:43 AM

Very curious about the study, but I don't have access. "Wired" seems to have a decent analysis of how it was conducted. Apparently, the initial study started by tracking Amazon purchases associated with Barack Obama's, "Dreams of My Father", and Mitt Romney's, "No Apology". Associations to those purchases were tracked through deeper cycles until they had about 1.5-million associated books. Then these were narrowed down to "science" and "political" books.

The authors state that the Amazon study lacked individual-level data, and could have been skewed by Amazon's own algorithms. Consequently, the study was repeated with Barnes and Nobel. According to one of the researchers, the two studies revealed "interestingly" different specific book associations. However, both studies indicated strong correlation between political ideology and "scientific discipline".

To some degree, I'm not surprised. However, I wonder if the study might simply be revealing the effect of an association with a philosophical bias that allows placing a premium on "faith". It would also be interesting to know what other factors, aside from political affiliation, might correlate. What of a bookshelf with "Dreams of My Father" alongside Colin Powell's, "My American Journey", and Ben Sasse's, "The Vanishing American Adult", as well as several recent acquisitions addressing vacuum-tube and transformer technologies?

I was able to see the entire study paper at this link, so see if it works for you. You won't be able to save it, but can view it online (cut and paste if it doesn't hotlink): https://www.nature.com/articles/s41562-017-0079.epdf?referrer_access_token=xA-MvgUCKA8Myh2x2YwYu9RgN0jAjWel9jnR3ZoTv0MwR8-I1w0esKXYjFLzdwe5JtR-W_GFBae9GyfKD0AACJafguqTNsjVn-Yo5O3RLx9QGNjiPC2EDhXSoMOm5EebRqh-BfZCkYAn9oT8PrZlwLem8BvagjbJyUfy7GkP2ItAkRdi5BkcipGiu5kNYsGNXLVOz3NzJcvolxUcSSBVi24uXzxAh4JqKCEWdY_58BBK2EpPkSGjeGmt2X9Tzb_W0eLX24jxzefpQhi2XhubpZpXJ_8UIiCQ9OTAL9L-9gQ3ktrJZipP_j9DTvtBgtYXaQOJrbS_nOZLpnZJqIYXQwz6Mx8pW_0_l21CHmxLwilOffxwEzcBxAYqJ7bY-2al&tracking_referrer=www.smithsonianmag.com

Thank you. Still don't think I'm seeing everything (it's asking for a subscription), but I can see the supplementary materials and references, which are by themselves fascinating. I think this really speaks to we humans being what we make of ourselves... which is a little disturbing in this particular light.