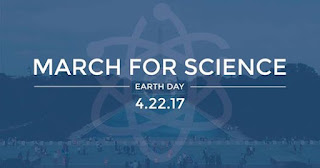 The new administration has made no secret it denies science and is set on destroying human health and environmental protections. The EPA transition team was headed by science-denying Myron Ebell, head of the anti-science, anti-regulation libertarian consulting organization, the Competitive Enterprise Institute. The new EPA Administrator is Scott Pruitt, an Oklahoma Attorney General who has been the fossil fuel industry's biggest ally, duly copying lobbyist talking points verbatim onto Oklahoma AG letterhead to sue the Agency he now runs.

The list of administration attacks on science has been endless, and we're not even 100 days into office.

Which is why on April 22, 2017, Earth Day, thousands of scientists and science-supporters will flood the National Mall and the streets of Washington to emphasize the importance of science in our nation and world. There will be satellite marches all across the United States, but the main march is in Washington, D.C. According to the March organizers:

"The rally will be a call for politicians to implement science based policies, as well as a public celebration of science and the enormous public service it provides in our democracy, our economy, and our daily lives.

The rally will feature main stage speakers and several large teach-in tents around the Mall where scientists, educators, and leaders from a wide variety of disciplines will discuss their work, effective science communication strategies, and training in public advocacy.  More details on speakers and presenters will be available soon."

Here is the itinerary:

More details on the rally and march can be found on the March for Science website.

Speakers at the teach-in will include such notables as:

All scientists and science-supporters should join us in Washington, D.C. or at one of the satellite marches. Wear your science-related t-shirts, lab coats, or whatever you wear to your job. Bring pro-science signs.

Remember, this is a pro-science rally and march. Come out and support science's role in public policymaking.