Science Communication - How to Deal with Trolls on Facebook 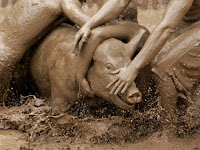 While all science is done via peer-reviewed research papers, scientific conferences, and active communication with other scientists, there is the illusion of scientific "debate" on social media like Facebook, Twitter, and the blogosphere. Blogs can be used to help communicate the science to others, including the general public, but blogs are only an extension of the science, not the science itself, largely because anyone at any time can say whatever they want on blogs, and too often do.

After observing some of the "debates" that occur on Facebook, it was refreshing to see an article on the blog Science Communication Media called "Constructively dealing with trolls in science communication." As I've been saying for a long time, the short answer is - don't.


Ignore: As with bullies, the best way to respond to a troll is to ignore them. It tells the troll they have no power or influence over their target and most of them will quickly move back under their bridge.

This is especially on sites like Facebook. Why? Because Facebook has designed their algorithm to keep "active" posts at the top of the feed for any given page. The same goes for any comment in the discussion thread.

And guess what is "active." Yup, commenting and "Liking" (and now, other "reactions"), the very thing that trolls desperately want you to do. Every time you comment, whether it be to refute or insult the troll, the more their post or comment gets shown to more people, who comment or "react," which goes on ad infinitum.

That is the entire goal of the troll. To feed their constant need for attention and obviate their mental insecurities. This all may be good for assuaging a troll's ego, but it's a waste of time for any honest person interested in discussion of science because the troll has no interest in learning, just trolling.

I've advocated blocking trolls (which, by the way, includes every climate denier who constantly floods Facebook climate pages with the same falsehoods over and over). The author of the "Constructively dealing with trolls" piece agrees.


Block buttons exist for a reason: The other simple response to trolls is to block them. No, seriously, block them. Blocking isn’t censorship or an admission of defeat – it’s simply a filter, in the same way we install ad blockers on browsers or choose not to tune into shows we don’t like. It’s so disappointing when I see scientists and other reasonable professionals waste their time responding to trolls.


Recently an otherwise well-meaning commenter on Facebook argued that blocking trolls merely blocks you from seeing them but those trolls can "converse" with anyone else who comes to the comment string. While that's true, the reason for blocking them goes well beyond that limited thinking. First, when you block them, you stop wasting your time with people whose entire purpose is to get you to engage so that their post or comment will stay at the top and be seen. That means you can spend all your valuable Facebook time posting and supporting posts that accurately communicate the science rather than unintentionally promoting misinformation. That's a win right there. Second, if all honest commenters block the troll then the troll will only be seen by random people who happen to catch the post as soon as it is posted. Those people will either 1) roll their eyes and move on, thus causing the post to immediately disappear in the thread (especially if new, accurate, posts are added by honest people), or 2) comment but quickly identify the person as a troll and block them too.

This is best summed up by one of my favorite paragraphs in the article:


Minimize responses – Arguing with a troll is like mud wrestling with a pig. You both get dirty and the pig enjoys it. Trolls thrive off provoking people, so ignoring them is usually the best way to get them to move on.


Indeed, as I've said before, engaging with trolls creates the illusion of debate, of discussion, of disagreement. What it does is misinform and disinform the reader. By engaging with trolls (e.g., climate deniers) we are doing a disservice to readers who honestly want to understand the state-of-the-science. We are violating the implied essence of the Hippocratic oath - first do no harm. We do harm if we contribute to misinforming the populace.

The article is well worth reading in its entirety and contains many other helpful gems of wisdom. It's called "Constructively dealing with trolls in science communication."


And yes, the pig wrestling picture comes off the blog (though I don't know if that is the original source).