The Surreal Case of Sarah Palin vs. Bill Nye the Science Guy 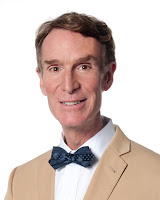 Among the many interesting climate-related activities this past week was one that qualifies as surreal. Former half-term Governor and 2008 Republican Vice Presidential Nominee Sarah Palin claimed that, somehow, 100+ years of published climate change research doesn't exist because Bill Nye is "as much a scientist as I am."

Let that idea settle in for a second. Okay, now let's take a quick look at facts.

Bill Nye studied engineering and received his bachelor's degree in mechanical engineering from Cornell University in 1977, where he remains an occasional guest-lecturer of astronomy and human ecology. He worked as an engineer at Boeing and other companies for many years before beginning his "Bill Nye the Science Guy" persona to communicate science to the public.

Sarah Palin hopped around five colleges before getting a bachelor's degree in journalism from the University of Idaho in 1987. She worked briefly as a sports reporter in Alaska before beginning a career in politics, and most recently, conservative political commentator.

But the fact that Bill Nye actually has a science background and Sarah Palin doesn't isn't all that relevant. The fact that someone like Sarah Palin is even in the same paragraph as someone like Bill Nye talking about "science" is the important point here. It shows how lobbyists use the media to try to misrepresent and delegitimize the science. After all, if one "side" is political, the other "side" must also be political, right?

No. This is what is called false equivalence. It's a tendency for media to try to pit one side against another: Democrats vs Republicans, Liberals vs Conservatives, One Dog vs The Other Dog. It's the adversarial horse race mentality that permeates our media because it drives ratings and enhances profit of the media companies. News isn't news unless it creates strong emotion in the viewer/reader, and that emotion increases viewership (which increases ad rates and profit margins).

Those who want to discredit the science of climate change, for example, use that corporate media reality to pit political hacks against 100+ years of peer-reviewed published science as if the two "sides" are equivalent. They aren't, but the public often can't distinguish this false equivalency, so the illusion of "debate" is what lobbyists are going for.

Getting back to Sarah Palin and Bill Nye. The media was all abuzz about reports that Palin would debate Nye about climate science. Not true. That was a lie put out by the lobbyists supporting Marc Morano's anti-science propaganda; the goal was, well, to create a buzz for the propaganda. This is how PR firms work. What really happened was that Palin mentioned Nye in her monologue at the promotional event. Nye wasn't even there. The whole thing was a ruse adeptly playing into the media foibles these lobbyists know they can manipulate.

One further word about Bill Nye. As mentioned above, Nye is a trained mechanical engineer, not a climate scientist. Why then is it important to listen to him? The answer is simple, as science journalist and author Chris Mooney notes in the Washington Post:

Nye is a persuasive entertainer who states climate science accurately and stands up for it.

Do we need Sarah Palin? Not so much.
Posted by The Dake Page at 9:50 AM

I agree on all points.

While I would argue an engineering degree does not make you a scientist (and I feel secure in saying this since I have a hybrid Engineering Physics degree), (a) engineers are immersed in the reality of science so they have to trust it or they couldn't do what they do and (b) a degree is only one way to become a scientist. There is plenty of objective evidence that Bill Nye has pursued science as an avocation, understands it and is well suited to disseminate it (which is all but impossible if you don't understand it). You covered that quite well

Then, of course, there's Sarah Palin who is a proud ignoramus. I'm still unclear why anyone listens to her on any subject.

That's what is so surreal about this being "in the news." It's as if we have to stop and think about who is right - all the world's scientists publishing in peer-reviewed journals and virtually unanimous in their interpretation, versus, someone with no science background miming (usually incoherently) talking points handed to her by political lobbyists.

This is more about the lack of critical thinking skills in the populace than it is about Palin and Nye. It's also why the media promotes such silliness - they know it makes them money to play the extreme ends of the spectrum against each other.