January is Hot, And the Supreme Court Just Got Interesting

January 2016 set the record for being the hottest January recorded. It follows on the heals of the hottest year ever recorded (2015), which itself blew away the previous record holder set just one year before in 2014. See a trend, anyone? With the climate clearly heating up, so too is the Supreme Court battle over President Obama's attempt to deal with climate change heating up. 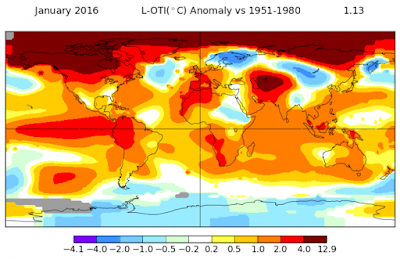 The January heat wasn't just hot, it was a bigger hot than any previous hot. At 1.13 degrees C above the norm it exceeds the previous record increase set a month before. This sets the stage for 2016 to possibly set yet another record, the third year in a row to break the previous record. Worse yet, the biggest increase in heat is in the Arctic, where it's so hot that the annual maximum sea ice extent is trending the lowest it has ever been. Bottom line = the rate of warming is higher than it has been in a decade, which will speed up the impacts we are already noticing and move closer impacts we hoped wouldn't be seen until the end of the century.

Which makes the sudden passing of Supreme Court Justice Antonin Scalia so important. Last week I reported on what the February 9th stay on implementation of the President's Clean Power Plan meant for climate. In the blink of an eye the entire calculus changes. The Constitution requires President Obama to nominate a successor to fill Justice Scalia's now vacant position on the bench. That same Constitution requires the Senate to review and vote on the nominee. Despite Senate Majority Leader Mitch McConnell's bloviating about not even considering a nominee, the Constitution requires them to act. With nearly a year left in President Obama's term, there is plenty of time for all to conform to their Constitutional responsibilities.

Given the far right "conservative" leanings of Justice Scalia, it's likely that any Obama nominee will be more judicially, well, judicial rather than overtly political. That obviously puts the Republican majority Senate in a position they would prefer not to be in - hence the bloviating - but they have an obligation to move forward. Assuming some Obama-appointed justice is confirmed, that justice is likely to have a different view on the Clean Power Plan than did Scalia. The same is true for several other pending and possible future issues before the Court.

So what happens next? As Obama decides who he will nominate, the Court is essentially (or at least presumably) deadlocked on key cases; those cases are remanded to the appeal court decisions, which in general favors Obama's positions. For the Clean Power Plan it likely means it will be allowed to move forward. That isn't a given, but the probabilities increase for it to happen.

As a reminder, the Clean Power Plan is simply a set of EPA rules that would help reduce carbon emissions from power plants. It is by no means the "answer" to climate change, merely the first small step within the limitations of Executive Branch authority while we all wait for Congress to take more substantive action. Given the Republican-led Congress's denial of the science, it seems likely that Congress won't take any action until Democrats can retake the majority. That's possible in the Senate this year (though by no means a given), but won't happen in the House until gerrymandering reform makes House seats honestly competitive (something that won't happen at least until after the 2020 elections).

Which is why the Clean Power Plan is so important. It's a small step, but it's a step in the right direction.