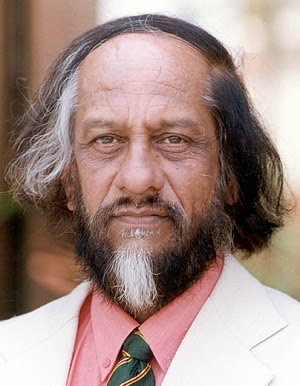 In a word - nothing. But let me explain for those unfamiliar with the IPCC and how Rajendra K. Pachauri became its chair, and why the current accusations are irrelevant to man-made climate change.

For those living in a vacuum, the blogosphere has been saturated with reports that now-former IPCC Chair Pachauri has been accused of harassment by a woman employed by his unrelated energy institute called TERI. Pachauri has denied the allegations and the case is likely to take some time to reach a conclusion. As such, Pachauri resigned from his position at IPCC and apparently is on leave from his position at TERI.

The first thing to keep in mind is that all of this involves TERI, not the IPCC. As we all know, the IPCC is the climate organization that all climate deniers love to hate, attacking it constantly because they don't like the state-of-the-science summarized in its periodic reports. This is yet another irrelevancy they will use to attack the science. You can read more about how the IPCC works and the denialist attacks on it here. Pachauri's term as chair was due to end this year anyway, and given that the most recent set of reports just came out and the next aren't due for nearly 7 years, his somewhat early departure isn't particularly meaningful.

By let's take a look at how Pachauri came to be chair in the first place, which explains why climate scientists aren't so unhappy to see him depart. Pachauri was elected to the chairmanship in 2002. That date is important to the story, the gist of which is the following.

Prior to Pachauri, the IPCC was chaired by Dr. Robert T. Watson, an actual atmospheric scientist who had been chair for about six years. Then George W. Bush was elected President of the U.S., and consistent with his long-time family oil interests, appointed Philip Cooney as the head of his Council of Environmental Quality (CEQ). A lobbyist for the American Petroleum Institute, Cooney would seem an odd choice for the CEQ, but his purpose would soon be evident. Cooney left the administration in 2005 after being caught doctoring climate reports to downplay the science in favor of his oil industry handlers. Upon resigning he immediately took a job with oil giant ExxonMobil.

But Cooney's dishonesty wasn't the only Bush administration attack on climate science. There was the matter of Robert Watson, who was up for renomination as the chair of IPCC, but the oil industry wanted him out. President Bush and Vice-President Cheney, both deeply indebted to the oil industry (Cheney had been CEO of Halliburton prior to VP), willingly acted on industry behalf to remove Watson. After all, who wants an actual climate scientist to chair the organization summarizing climate science, right?

Enter Arthur Randol III, a senior adviser for ExxonMobil. As detailed in a 2002 article by noted science columnist Andrew Revkin, Randol, in a memo directed to the Bush administration, issued his instructions and asked whether Dr. Watson could "be replaced now at the request of the U.S." Not long after, Watson was out and Pachauri was in as the new chairman of the IPCC.

Pachauri is an industrial engineer and economist, not a climate scientist, so was thought by the oil industry to be more amendable to the industry position. That turned out not to be the case, as the science speaks for itself no matter who is nominally in charge of the process. As described earlier, the IPCC has a very small staff charged mostly with "herding cats," i.e., an administrative function focused on coordinating the volunteer work of thousands of climate scientists around the world as they work unpaid for up to 7 years collating, evaluating, and summarizing the tens of thousands of new climate research papers since the last IPCC review. These thousands of scientists work in teams to summarize the data. Their drafts are then reviewed by other scientists, as well as anyone else who requests to review the reports prior to publication. All comments (yes, even from climate deniers) are addressed, and each set of reports receives thousands of comments (which is why the reports take so long to be finalized).

The chair of the IPCC merely oversees the coordination process while the reports are being prepared, and then serves as a central spokesman for the results reported. The chair can only reiterate what the science says. So in essence, it isn't particularly relevant who chairs the IPCC, only that the process of compilation and summarizing of the state-of-the-science is completed by relevant climate scientists. Which is what happens.

One more point to keep in mind is that the IPCC merely reports on what has been published, i.e., the IPCC itself doesn't conduct new studies. Most of it comes from the peer-reviewed literature, though some government and non-peer-reviewed data and analysis are also cited when relevant and reliable (not surprisingly, this gray literature is more common in the policy-oriented volumes of mitigation and economic impact, whereas the vast majority of the physical science volume is comprised of peer-reviewed scientific studies). In addition, while IPCC compiles all the scientific literature worldwide, specific scientific climate research organizations such as NOAA, NASA, CRU, and others conduct their own research, and all agree that more than 100 years of data unequivocally demonstrate that human activities are driving the warming of our planet. The science stands on its own, no matter who the IPCC chair happens to be. So Pachauri's departure is essentially, meh, in meaning.

That said, the United States and the world now have an opportunity to support the appointment of a real climate scientist to take over the chairmanship of the IPCC. Most critical is the ability to accurately communicate the state-of-the-science and to manage the process such that governments feel confident taking action to deal with the challenge of our lifetimes.

The science says that action is necessary, and now. It's time the U.S. and others move forward on that action.